When we were growing up there was one place filled with the treasures a ’70’s kid desired. That place was the corner liquor store. It wasn’t booze, cigarettes, or girly magazines we desired as pre-teens, it was everything else this wonderland had to offer.

Liquor stores were the 5 and 10 of our times,  the JJ Newbury in our suburbs, the General Store in our one-beach town. Back in the ’70s, the liquor store was “the place” for the kids to hang out. It might sound really strange to a generation that sees liquor stores as glorified wine racks and Lotto outlets, but back then we trekked miles to experience the wonders of a liquor store. Any shopping center with a Liquor store (within walking distance) was a destination for us. It was even better if there were complimentary stores within reach to complete the experience

The first Star Wars trading cards I purchased were at a liquor store. The first time I sunk quarters in Asteroids, tasted a KitKat, a Twix, or a Snickers was at one too.   The liquor store had candy and snacks that no self respecting grocer would carry – Bubble-up soda, Marathon candy bars, Frito-Lay Nutty Bars, Big League chew, It certainly was the only place to get the original Mars bar, waky taffy, and “Whatachamacallit”. They carried “kid currency” like Wacky packs, Topps baseball cards, pop rocks, and candy cigarettes. Imagine the pickets and boycots today if ANY store carried candy cigarettes! (actually, they are still sold on the East Coast -Ed)

It seemed that all over Manhattan, Hermosa, and Redondo (before the proliferation of 7-11 and AM/PM shops) the liquor store was the place that kids would bike or walk to.  I remember Super Sam’s on Rosecrans (now gone); Mac’s on Marine (also gone) right up from Marine street beach and those infamous volleyball courts. Of course the scariest in our neighborhood was S&S Liquor and Grocery mart at the corner of Robinson and Aviation. It has now been replaced with a housing tract, but back when we were kids, no other set of run-down stores collected a better showing of exotic candy and soda to tempt our pre-teen palates – or scare the crap out of us more. I think it was the walk East that scared us, as we had been repeatedly told that EAST is bad. In the South Bay, West meant wealth, power, and fun, while EAST meant the opposite. Of course I now live in that EAST part of town. You know what? Its virtually no different than West – maybe a few more Toyota Camarys and not as many Lexus wagons (which are the same car by the way).

The store we frequented the most was Manhattan Liquor, in the shopping center that borders a McDonalds on the East and a Washington Mutual on the West (on Artesia and Sepulveda in MB/Hermosa). It’s still there, but it is a shadow of its former self. Oh sure, it is cleaner now, well paved, with a better selection of stores, but to me, it has lost something. I’m not sure if this one had an official sounding name like with “Pavilion”,”Center” or some other store aggregation word in the title. If it did we never used it, knew it, or cared one way or the other. This was the Mecca because it was relatively close. Not “down the street” close, but it could be trekked to by taking all back roads and no major streets. Not only did this shopping center contain the aforementioned Manhattan Liquor (still there but basically a wine store now), but it also contained Guild Drug and a Safeway.  At the peak, all three stores had at least 2 video game machines, loads of star wars cards, exotic and generic soda (we didn’t have much money), Little Debby, Hostess, Frito-Lay snacks, and other assorted taste bud pleasers. The Guild Drug was an independent store the likes of which you rarely see now. That store was where we purchased everything we needed from squirt guns to Christmas presents. It was a wonderful world of kid-level shopping. With virtually no real toy stores around, it contained a relatively large section dedicated to Lego, Hot Wheels, cap guns, army men, and other plastic treasures we desired. It also had the first and only Wizard of War machine I can remember playing. That was a game was on of the sole reasons I wanted an Atari 800 computer back then.

The McDonalds provided us with most of our early (bad) nutrition as the happy meals actually made us HAPPY – with boxes full of toys and packaging that doubled as game boards, puzzles, and paper action figures. They also gave out magazines, comic books, and coupons for free shakes, fries, cookies and pies. Sure it was just marketing fluff, but for us it was great new (and sometimes free) stuff that at least held our attention for the summer afternoon. If anything could keep us from having to watch another episode of BJ and the Bear, Sheriff Lobo, or some other 70’s re-run, then we were happy.

When McDonalds decided to have sweepstakes where the grand prize was an Atari computer, we stepped up our level of fast food runs to new heights. I think it kept us going for a whole summer – the hope that we could win the pinnacle of our computer game desires.

The Safeway was the “other Grocery store” in that part of town. It didn’t live up to the relative luxury of the Lucky across the street, but it had one thing that Lucky lacked – Star Castle! I must have played that machine 300 times before I finally was able destroy that infernal mad robot in the middle. Safeway also had an incredible selection of generic soda and snacks to keep us energized during out trek back home.

The Guild Dug is now gone, destroyed in a fire and replaced with a boring pharmacy that I think is targeted at the over 75 set. The Safeway is now part of a Gym, and even the McDonalds has been completely re-modeled to look more like a retro Bob’s Big Boy. Sure, as a teen we frequented the El Sombrero “Hot Plate” Mexican restaurant more than our stomachs could handle, and as adult, I appreciate that the shopping center has grown up with me. When I needed a new Gym, we signed up at the Bally’s that replaced most of the Safeway. I get my hair cut at the barber shop that moved in right where the Galaxian and Star Castle machines used to be, the Kinko’s has served my all the copies I’ll ever need, and the Coffee Bean the Tea Leaf makes a mad Chai Tea. I even frequent the sandwich joint that has replaced part of Guild drug.. These stores have grown up and serve my needs in brand new ways and I’m grateful, but it’s just not the same. If we could convince Fantastic Sams to put a Star Castle machine in the waiting area, then we’d be talkin’… 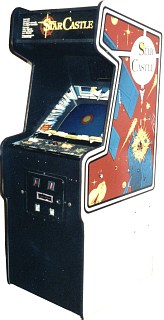