Most Friday nights in  the very early 80’s, my twin brother and I would accompany my mom on the weekly shopping trip to Lucky’s supermarket.   In the late afternoon my dad would arrive home from work with his weekly paycheck cashed and ready for the weekend.  He would lay the crisp $20 bills on his bed, one by one, dividing up what my mom would get for the ‘house’ , what he would ‘sock away’ for whatever it was that he was socking-money-away for that month (Motocross bikes, Civil War memorabilia, whatever).   However, the most momentous portion of this ritual was the final act.  Dad kept four $5.00 bills separated from the rest.  If we had ‘earned’ it that week (or rather, ‘not lost it’ by being idiots), he would dole-out these bills as weekly allowance for each of his four kids.

With the house-money firmly placed in her smart-looking imitation red-leather purse, my mom, my brother and I would head-out to our sea-blue 1975, Datsun 710 station wagon (with a primer-tan back-end from the accident in 1978), and begin the weekly shopping sojourn.    Even though this event had an air of the ordinary, my brother and I were always genuinely excited about the trip.  The $5 bills burning holes in our O.P. velcro ripper wallets would soon be put to good use.  Mad Magazine, $.07 cent Shasta Cola, dominoes,  plastic army men,  Twinkies, Topps Star Wars trading cards and/or whatever other contraband we could afford that would get us through the weekend of broadcast TV and lamenting about the seeming impossibility of getting an Atari 2600 video game system for Christmas.

On one particular Friday night in November of 1981, after we had helped our mom select stuff like individually wrapped Kraft Cheese balls, Peanut Butter Captain Crunch, and Fresca, my brother and I snuck to the magazine rack to try the MAD fold-in and see if the current issue was worth buying.   I’m pretty sure though, on that night, we never  found out.  Before my eyes could reach the cover of MAD, they fixed on the following: 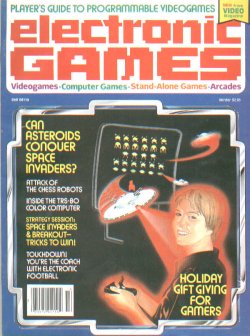 I quickly grabbed the magazine started paging through it.   ‘Electronic Games’, just the name held so much promise.    ‘Games’.  Is there a better word in the English language (when you are 11 that is).  ‘Electronic’: it seemed so space-aged, so advanced.  Sure, we had a few games that were ‘electronic’.  Mattel Electronics handheld Football ,  and Basketball, and baseball board-game we had gotten for our 10th birthday.  Other than those things, and a few rudimentary ‘pinball’ games we had made out of spare rubber-bands and diodes from the garage, our actual ownership of ‘electronics’ had been quite minimal, which made the title all-the-more alluring.  My brother pushed over my shoulder so he could look as well.  I turned past the first page ads and table of context, and fixed my eyes on these words in the editorial:

Did you know that you’re a member of the world’s fastest-growing hobby group? It’s true. Although the first Pong machine made its debut only a decade ago, today more than five million Americans regularly play electronic games. The introduction of space-age electronic amusements amounts to nothing less than an entertainment revolution.

I had no idea.  I’d never really felt ‘part’ of anything before.  Well, OK, soccer and baseball teams maybe, but they were short-lived: as soon as the season was over, so was the camaraderie.   This seemed completely different.  A ‘member’ of a ‘revolution’?  I had never thought it was possible.

Electronic Games truly was revolutionary. It was the first of it’s kind: a monthly publication dedicated to video games and the video game phenomena.    The Magazine started as a series of ‘Arcade Alley’ columns in Video Magazine in the 1980 written by Bill Kunkel and Arnie Katz and championed by Bruce Apar, editor for Video Magazine.   Katz and Kunkel had been friends since the early 70’s, turning their passion for pro wrestling into a radio show, and one of the first Pro Wrestling  magazines.   When that failed to catch on, they wanted to try to make a living at something fun.  The seed of that idea blossomed into ‘Arcade Alley’, this success of which proved to Reese Publications (the publisher of Video) that a video game magazine might have a chance for success.    Kunkel and Katz pitched  the idea, and before the end of 1981, they had their first issue published.    By 1982, Electronic Games became THE authority on video games, and along with it, writers Arnie Katz, Bill Kunkel, and Katz’s girlfriend Joyce Worley, became household names to video game fans everywhere.  The basic design of Electronic Games (editorial, news, letters, previews, reviews, strategy) was copied by every major video game publication that followed, and the structure can still be seen today in most video game and computer game magazines.

The names Katz, Kunkel and Worley would be branded into our heads in the coming years, but that this historic moment, in the magazine section, next to the party favors and across from the vegetable sprayer, all I cared about was the fact that I seemed to be holding the future in my very hands.  I kept turning pages, thirsting for more and more.   I knew that at any given moment, my mom could call us to leave the store, and we’d have to leave the magazine behind.   There was no way such a practical woman, who had often eaten ketchup and salt soup as a little girl in great depression, would let us waste $2.95 on a magazine about video games, just the thought of asking her seemed silly.

However, when she finally called us to the check-out line, we arrived with ‘Electronic Games’ in-hand.  Any thoughts of sneaking it through unseen were lost when she deftly asked  me to show her what was clenched in the hand hidden behind my back.  Her initial reaction to the magazine was mild horror, mixed with disgust. (the same reaction I had received in1978 when I suggested I buy 10 packs of $.10 ‘Star Wars’ Blue Series 1 trading cards for my brother for our birthday).  Surprisingly though, she gave ‘in quite easily this time,  and I’ve always wondered why.  Maybe she saw and understood how much it meant to us, but I really don’t think so.   To this day, she still doesn’t understand the appeal of video games or computers. I think it was something much more personal.   There are points in a parents life when they realize the diminishing returns of trying to mold their children into their own image I think, for my mom, this might been one of those moments.

My brother and I split the cost of the magazine and took it home, where we traded turns reading/looking over the other guy’s shoulder for most of the weekend.  We missed the new episodes of ‘The Incredible Hulk’ and ‘Dukes Of Hazzard’ that night.  Friday  TV just could not hold a candle to our new discovery.  To be honest, TV itself would never quite hold the same fascination ever again anyway.   Well, not static, boring, non-interactive broadcast channels anyway.   We drank-in the full-color pages, the reviews, and previews, the articles, and the advertisements.   Every page held a treasure-trove of wonder and interest.  Did all this stuff really exist?  We not were complete virgins when it came to video games, but who knew the information about them could fill an entire magazine?   It was a whole world we had been missing, and neither of us wanted to waste another second standing by it’s edge: we wanted to jump in feet first and never look back.

Before finding ‘Electronic Games’ we were both interested in anything that had to do with video games, however, there just was not that much information to have.  Furthermore, if information was available, it was either negative, misleading, or patently incorrect.  We were constantly told by the TV news that video games were ‘just a fad’ and they would soon disappear.   The parents in our city, Manhattan Beach, CA had recently risen-up to fight the opening of a themed arcade/restaurant named ‘Magic Pizza’ because of the ‘bad element’ video games were sure to attract.   Even our parents, who were otherwise cool in so many ways, had a tough time understanding why we wanted an Atari 2600 and what it meant to us    If we listened to others, video games were flash-in-pan bad habit sure to rot our brains as well as our teeth. In our hearts we knew they were fun and cool, however, we had no solid proof except for our own personal feelings.  Now we had it.   ‘Electronic Games’ magazine became that proof.   Mom had given-in and let us buy it, and our dad started to act genuinely interested in our fascination after seeing it.  The magazine was printed vindication for a couple of 11-year-olds whose infatuation started 1977 with ‘Combat’ and had gradually built every year since.   The irony here, (and of course there must be since we Gen-Xers are supposedly full of it) is that while we had been exposed extensively to video games and electronic entertainment in the past, it took a printed magazine, a technology roughly ‘ millenium long-in-the-tooth, to make it all seem real.   Within days, we would be hinting about that an Atari 2600 would be the perfect Christmas gift, and this time, the targeted ears seemed genuinely  receptive.   The prospects of seeing one under the Christmas tree no longer seemed all that impossible after all.

Last year I had the pleasure of meeting Electronic Games editor bill Kunkel for the time.  After reading his book “Confessions Of The Game Doctor“,  I emailed him and invited him out to Mattel Toys to teach a his class on game design to our online games team.  It was a thrilling couple days learning the ropes from an industry pioneer, and an honor have had him come out and spend time with us.   –Steve