Note:
New Star Soccer 4
(NSS4) is a brilliant independent game by Simon Read. It was released
on Windows and Mac platforms in early November and I am spending some
of my free time with it, grinding out a career as a professional
footballer. The game includes a full 3d match engine where you can play
out your career in semi-real time, as well as one of the most in depth
personal career management systems ever put into a computer game. The
early stages of the game are very much akin to a “grind-it-out” role
playing game. I am still in that stage right now. Everything described
below is a narrative version of actual in-game events.

One other note: I got an email complaint from someone who didn’t like
my characterization of the low quality of  MLS and especially
the Galaxy in my last post.
I was taken back by some of the language used in the email mostly
because they usually save those comments for Jamie Trecker.
I want to assure anyone who reads this that I have been a Galaxy and
MLS supporter from day one. I was one the the 70,000 who attended their
first game, and I have attended at least 5 games a year since. I watch
every televised game with my 82 year old father, and we yell at the TV
the entire time. I also am a HUGE USA nats fan, and  I watch
every game on TV and attend every local match they play (usually in
January, but this year also in July). I have done this from all the
back in he early 80’s. There will be many who claim that they attended
the 1-0 Costa Rica loss at El Camino
college in 1985, but my dad,
brother Steve and I were actually there.  Contrary to reports,
the crowd 40% USA fans and 60% Costa Rica fans. It was not 75% Costa
Rica fans. I am by no means what you would call an American Eurosnob
(not my characterization, but one used by many USA fans). My
characterization of the Galaxy as needing any player who can kick a
ball and tie his boots properly was a joke made by someone who knows
that is it not actually true. More or less, it’s all they could afford
this year though. Now, that’s been said…

When we last left 8bitjeff he was warming the bench and getting limited
playing time with the LA Galaxy of MLS. He had scored only one goal
in real competition, had no assists, no tackles, and only a handful of
meaningful passes completed. His confidence was at an all-time low and
his luck with the ladies was snake eyes all the way. He needed
a change badly and one came in an offer to play continental semi-pro
football in the outskirts of England’s lower leagues.
8bitjeff packed up his only meaningful belongings (a full set
of gym equipment, surf board and mobile home) and trekked to the
outskirts of English football for a loan spell with Stelybridge Celtic
of the Northern Continental League.

Once on the ground in Merry ol’ Engerland, 8bitjeff spend most of his
free time gambling in the casino and playing 5 aside (plus a keeper)
matches in doors to keep out of the British Winters. He was given the
opportunity to start a few matches because of his impressive training
regime and by the end of the campaign had actually scored a couple
goals and had 1 assist. It was enough to be offered a 5 year stay, but
with his sights set on the big time, 8bitjeff accepted a move to Spain
to play for B league leaders Codiz CF.

The entire summer off season was spend in his new swimming
pool, working on endurance, and running around cones on the practice
pitch in an attempt to turn his natural speed into dribble prowess.

When the new campaign started, Codiz wanted to see what their young
American was capable of and 8bitjeff didn’t didn’t disappoint with a
spectacular goal. Unfortunately, with the fire power already available
to this top table club, he was treated to a bench stay in
reward for his play. After a few fruitless substitution performances,
8bitjeff earned his first ever Man of the Match award for a goal in his
start against Lacena. After 6 matches, Codiz sits top table with 5 wins
and 1 draw. 8bitjeff hopes to keep impressing the manager in training
so he will get more chances to shine, as even a Man of the Match award
will not guarantee a starting spot on this competitive club. 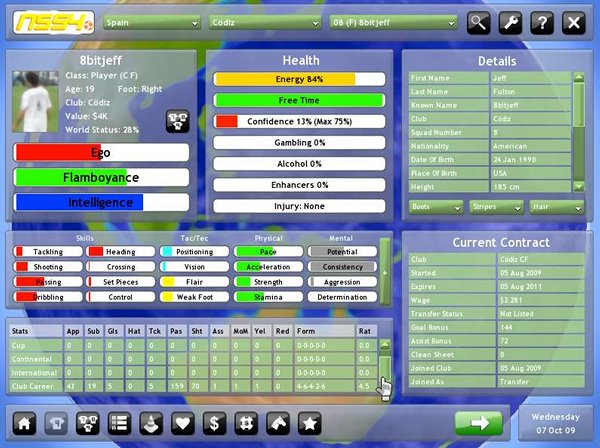 8bitjeff’s current financial situation is better than ever, but still
not great. Now that he is earning $2300 a week with only about $250 a
week in expenses, he has been able to save a little dosh.
This frugal lifestyle has absolutely NOT proven enough impress the
lovely Spanish ladies as 8bitjeff had not been on one date since his
move from England (he had 2 disastrous dates there, one girl left as
soon as she saw his clothes).  8bitjeff hopes to score enough
goals to impress a boot sponsor. If he doesn’t, he will need to store
his pennies until he can purchase the $40K power car that will
hopefully be enough for a date to stay more than 3 minutes with him.
He only has $27K in savings, and with a selection of friends
and family hangers-on sapping his cash reserves all the time, he will
need to stay pretty frugal to get there.

8bitjeff had his $16K mobile home shipped from the Midlands to Spain,
and it is obvious to him that he will need to get at least a small
apartment before any ladies will give him a second date (it they get
even passed driving in his $8K car that is). It will cost $81K for that
small apartment, but it will be well worth it when it he has the
resources to indulge.

In training, 8bitjeff has successfully been able to complete some
advanced passing, dribbling, and tackling drills, but the
shooting and heading drills (what he needs to be a competent striker)
are just too taxing for his weak frame. He will continue to work with
his full selection of workout gear that he stores under a giant tarp
next to his mobile home, and swim in the giant portable pool that he
dragged from England to Spain.  Hopefully if he works on
speed, endurance and strength, he will be able to start more matches
and get the eye of some sponsors.

The next fixture for Codiz CF against 8th place Marbella will hopefully
be another opportunity for 8bitjeff to shine. Until  then,
he’ll go hit the race track with some friends and try to win enough
money for that car to entice the ladies…