With Retro Blaster nearly complete, I have decided to start on a new game. This one will be very simple. I plan to do a few simple games in the next few weeks to try out my bitmap animation techniques in a variety of more simple shooters.  Since I love 8 and 16 bit retro games, I decided to try out some Atari 2600, 5200, 7800, and 800 games a make a list of the ones I want to tryout.

One of the best places to research Atari games is Atariage.com. They don’t cover Atari 800 games, but they have a full and complete listing of all carts (and most of the roms too) released for the Atari video game systems. I would love if they would add in a section for the XE Game System and list all of the carts released under that label, but so far they do not have that information. For the most extensive listing of Atari 800/XL and XE games, there is no better resource that Atarimania.com.

One of the first games I played in the arcades of the 80’s was Berzerk. There were a number of versions of this game made for various Atari systems. Atari released the arcade port on the 2600, 5200, and 800/XL/XE. There was also game very similar game called K-razy Shootout released for the Atari 800. Yet another similar clone was a game called Marauder.  I will play all of these and maybe a few more clones, if I can find them,  to create a non-scrolling, screen, by screen adventure / shoot ’em up.  To keep it simple, the maze screens will be the same each game, but you will start in a different room each game.  There will be some items to collect, a few extra weapons and power ups to find, and a ‘reactor’ or similar item that will need to be destroyed before the player moves to the next level. Each level will use the same screens, maybe mixed up randomly, but will get progressively harder with more enemies to fight and fewer health and weapon power ups to collects. That seems pretty simple.. I’ll play the games emulated to get some more ideas.

One thing I disliked about 80’s games was the use of ‘men’ or ‘ships’ to depict lives.  This is purely personal taste, but I like the convention of health or hit points. I used that idea in Retro Blaster, and I assume I will use the same convention in this game. It helps makes all games a little more role playing-like and adds a little bit of extra strategy to the game. Also, while I love games like 1942, I hate that every time I get hit by any ordinance, my plane crashed and I had to start over. I may love retro style games, but if I can improve on older conventions and make them more fun (for me at least) I will. Now, on to the games: 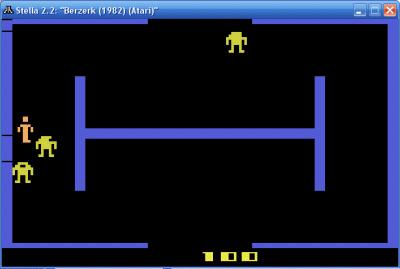 This is a pretty good version of the game. The arcade game wasn’t overly complicated, but this is still a very impressive game considering the limitations of the Atari 2600 hardware. The basic idea is to run from room to room, shooting the ‘Cylon’ like robots. If you stay too long in a room, Evil Otto will arrive and try to destroy you player. Some interesting things to note about this version:

1. You can only shoot one shot at a time.

2. The little light on the front of the ‘Cylon’ moves left to right, and is not a light, but just a rectangle that is the same color as the floor.

3. Evil Otto comes out in game variation #2 pretty quickly, and makes the game a little too difficult.

4. There is no point to the game other than surviving for as long as you can and racking up a score. There is nothing wrong with goals as un-lofty as these, especially for a retro game. 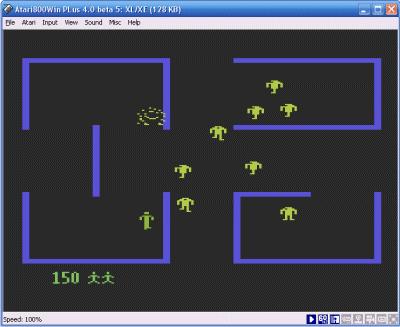 This version is much closer to arcade perfect than the Atari 2600 version. It adds a couple elements not in that game.  Here are my observations about this version.

1. You get a bonus for shooting every robot on the screen without dying, and you can shoot two bullets at a time. The bonus is in the 2600 version (10 points for each robot, but it doesn’t say Bonus, it just puts the extra score on the screen in place of the user score)

2. The game is still too damn difficult to play though.

3. The robot heads rotate in this one very much like the 2600 version.

4. Also, the door the player entered through will be sealed off with a different colored wall so he/she cannot go back through to safety.

5. Oh yeah, in both 2600 and 800 versions, you will die if you touch any of the walls. Now, I don’t want to get picky about ‘realism’ in 2d game where you are being chased by robots and a bouncing happy face will kill you, but who in their right mind would build a maze in which the walls kill any who touch them?  I might add this ‘feature’ into my game, but then again, I may not, 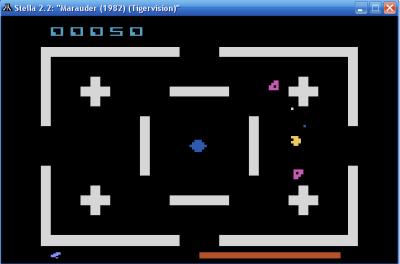 This game is much like Berezek with some well defined differences. 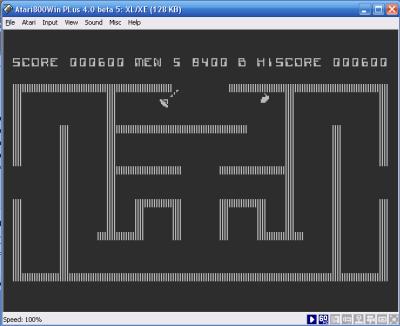 The graphics in this version are much higher resolution than the Atari 2600 version. Unfortunately it was based on a Apple II game and uses a black and white or only dithered color mode of the 6502. The 2600 version comes out looking slight better because of this.  This version plays and sounds much better than the 2600 version though.  It contains  many more screen variations and a very satisfying explosion when the player shoots the power cell. I can’t find any instructions for the game. Atarimania.com does have a review and some good comments on the game, but without the docs, I have no idea if there is a set of magic armor in this game.  Special note, this is actually stage 2 of a 2 stage game. Stratos is the first stage. It is a completely different game. It is more of a Missile Command / Space Invaders style game with more colors on the screen. 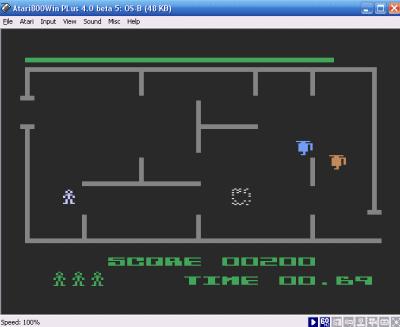 K byte software made quite a few arcade game clones for the 800. KRAZY Shootout was one of the first games I ever played on my 800 on Christmas morning in 1982.  I remember being amazed at the detail in the images and explosions. There are many nice features and touches in this game.

I imagine that I will make a game that is more a combo of K-RAZY Shootout and Marauder than just plain Berkerk. For a ‘quicky’ game, I still need to add enough elements to keep it fun. It needs some of the game play sensibilities that the NES and Sega Master System brought to gaming in the late 80’s.  Those would be extra weapons and maybe a secret room.  Here is a basic outline for the game I will create in Flash.

Next up: My first milestone in creating this game will be to demo a maze and movement noted above. The next blog entry will be a discussion of and a playable version of this demo.