Do all the fancy controls of the Fifa series confuse, frustrate or annoy you? Do you value playability over fancy rendered realistic images of Ronaldo’s bald head? If you have any interest in Soccer, or role playing games, or sports game for that matter, New Star Soccer 3 might be just for you.

I used to play some great footie games on my Atari ST in the early 90’s – Anco Kick Off II (by the legendary Dino Dini), Anco Player Manager and the Sensible Soccer series of games. Once the ST was put into the closet, I purchased quite a few soccer titles for the modern machines – FIFA, Winning Eleven, etc. While they have all made great advances in technology, the games were just not as fun to play as the masterpieces of the 16-bit age. I thought I would have to remain satisfied with playing Player Manager in emulation, but then I happened upon what is quite possibly the best footie game ever published, New Star Soccer 3!

This title, written in Blitz Basic, from New Star Games, is a testament to what an independent developer can achieve basically on his own. Simon Reed, the mastermind behind the game, is one of those indie developers who just “Get It”. He understands exactly what makes a great game. Gone are any attempt to make his game LOOK exactly like the real thing, and IN is a game that actually PLAYS like the real thing. No effort has been spared to make this game as playable as possible. From the simple controls to realistic in game AI, he has created the first game that I have been addicted to in quite some time. The visuals are nothing to get excited about, but they are clean, crisp. and detailed. No mind, because the game plays like no other. The control is a combination of the “Kick and Run” Anco style and the “Ball Tied to the Foot” style of the Sensible series of games. (See Picture below). Yet, it feels unique, and brilliant in its own way too. If you played any of those classics on your c64, Amiga, Atari, Spectrum, or Amstrad, you will know exactly what I am talking about, and will be surprised at how well be has improved on the control in his game. 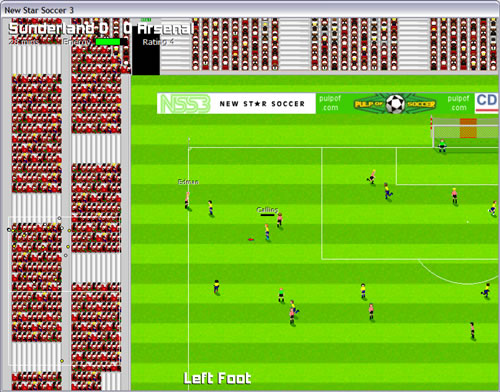 You start the game as a 17 year-old bench warmer in one of 64 real leagues from around the world. You can download a selection of authentic club logos, colors, and player names during game set up. I chose to be Jeff “Goals” Fulton, a new member of the Los Angeles Galaxy (My Local Club). My team features real Galaxy stars such as Landon Donovan and Cobi Jones, but the vowels in their names have been altered for copyright reasons. The game allows you to train your alter ego in 14+ areas, and progress your career in a way that I can only describe as a brilliant sports / role-playing hybrid. You must first have a tryout and prove to the coach that you are able perform basic passes, shots, and tackles. If you are good enough, you might get in a match right away. If not, you will need to train like a mad man, while making sure not to over train and be fatigued when you are chosen for a match. Once you do get in a match your statistics play a huge part in the game. Your strength, speed and stamina are most important at first because you need to be able to play for more than 15 minutes without tiring. After you have sufficient training in the these raw basics, you can begin to focus on refining your technical skills such as passing, shooting, heading, tackling, using both feet, and your mental and tactical skills such as match vision (the ability to play the game w/o looking at your feet). As you train in real time sessions your player’s attributes increase and you will see the results as you control him matches.

The game control is flawless and easy to master, You really only need 2 buttons, but 4 come in handy. You can do quick shot or passes by tapping the shoot or pass buttons, or you can meter your pass/shot strength by holding down the button for a length of time before you release. A quick tap shot or pass will go in the proper direction automatically. As your skill attributes increase the accuracy of these will increase. You will notice that over time you will master the controls well before your alter-ego has become proficient enough to pull off exactly what you want. As you master shooting for instance, you will be able to take fast low shots that you can curve with “after touch”. The other two buttons are used to call for the ball when you are open and do lob/slide tackle depending on your current situation. You can also head the ball and the accuracy will depend both on the movement of the direction controller and your skill in heading. You can slow down or speed up the match to your liking. I’m old, so playing in slow mode affords me the chance to actually score a goal now and then,

The mental well being of your player is also important. If your confidence is low, your manager will not select you for a match. If your relationships with friends, family, teammates, coaches, or the inevitable girlfriend sour, it will affect your player’s skill during match play. Thankfully, just as in real life, you can spend money on your girlfriend, family, and friends to “buy” their companionship and help your overall well being. Also, there are a selection of off-field activities (and drama) to participate in such as drinking and gambling outings with friends and teammates, spending binges, family problems, performance enhancing drug use, and more. This is all conveyed in a simple, clean interface. If you drink too much, you might be slowed for your next game, or might even be sent to dry out for a few weeks. All of your actions or inactions affect the out come of the game.

One of the most fun aspects of the game is the chance to be chosen to play for the national team side for your country. You play not just in the world cup, but in qualifying matches and regional tournaments. Simon Reed has spent time modeling many regional international tournaments and competitions. You are not automatically chosen to play in these matches, you must perform on the field to have a chance. Your on-field performance is based on statistics such as goals, assists, passes completed, tackles made, fouls, yellow / red cards and more. If you want to get a good rating, you better pass that ball to your remarkably intelligent team mates. If you are a ball-hog, or they sense a lack of confidence in you, they will not pass the ball back. You will need to prove to them on the field that you are worthy of suiting up next to them. Your performance is boiled down to a 1-10 rating per game and averaged over the last 10. You are also given a financial value what starts at about 100K and goes up as you progress through your career. If you are worth including in the national team squad, you will get the call.

After each performance, you get to read  comments from the news dailies on your performance. They can be brutal at times even when you win the Man Of The Match award! Once you choose a team or a league, you are not limited to that selection. You can request a transfer to any league in the world. Also, once you prove yourself a worthy player, you can re-negotiate your contract, and accept or reject transfer offers from clubs around the globe. I have played in the USA, Germany, England, Spain, and Italy, and then back to the USA. In the easy difficultly mode I won two world cups (with the USA!), and player of the year awards while with Palermo and AC Milan.

All I can say is there is no other soccer, footie, or sports game like it. Simon is working on New Star Soccer 4 right now. I will be first in line to buy it when released.