Great 8-bit home computer games didn’t start and end with the C=64 in the 80’s. Classic 8-bit computer games were enjoyed on many other computers, the Atari 800 being arguably the premier computer gaming platform in the USA for about 3 years (1980-1982). This dominance ended when the low cost and slightly more powerful, mass market C=64 hit discount retail shelves. But, there were more than 5000 Atari 8-bit games released during the 80’s and beyond. Many of which were outstanding. Of course many people have heard of or remember games such as Zork, Mule, Star Raiders, and Ball Blazer. But do more than a handful know that the Atari 800 was the original machine of many great future Commodore ports? Do they also know that the Atari 800 had many great original games that never made it to any other machines? As a side note, and as an ironic twist, do many Amiga fans know the Atari 8-bit computers were designed by Jay Miner The same Jay Miner who would go on to create the Amiga Computer when Commodore bought Amiga Corporation out from under former Commodore President and new Atari owner, Jack Tramiel? (whew!)

A couple years back, I started to create a database of all the Atari 800 games. I planned to play every Atari 800 game in emulation and give each a 1-10 rating, write a sort description, and compile release date and publisher / developer information. While I never got to play ALL of the games ever released, I did try about 1000 different titles with the Atari 800 Win Emulator I continue to try games with the emulator and add them to the database, but I don’t have the same free time I once had. Based on those ratings, what follows are some of the lesser known, but still great Atari 8-bit computer games.

Synapse is one of the great lost companies of the early 80’s. They took some pre-existing basic concepts and created advanced versions that far surpassed the games they were based on. Fort Apocalypse is a 4 ways flying helicopter shoot-em-up. It was released for the C=64 and Atari 800 in 1982 and also as an XE Game System title in 1986. Steve Hales wrote the Atari version as well a as the classics Slime and Dimension X before the demise of Synapse in 1984 (yet another company supposedly put out of business because the Tramiels decided not to pay their vendors and contract developers). This is a game that Steve says was inspired by the movie Blue Thunder and owes at least a part of it’s origin to games like Choplifter and Defender. The game is suitably different from those, enough so that it is a classic in itself, as it included 4-way underground chopper movement in an action/adventure setting.

The object of the game is to traverse the underground “fort”, destroy enemy installations, ordinance, aircraft while rescuing hostages and keeping an eye on your fuel. Fuel can be replenished by landing on “fuel” platforms. You must patiently wait for your chopper to refuel while enemy attack from all sides. Technically speaking, this is an examples of a great looking, playing Atari 800 game. I remember buying this one from a Big Ben’s record store in Van Nuys (while visiting my grandma). Steve and I took turns reading the back of the box and the instructions the entire day and ride home. Still, after all these years, I seem to have forgotten just how difficult the Synapse games were as this one is a real bitch to play. 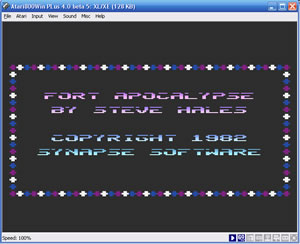 (Above: Fort Apocalypse being played with the Atari800win emulator. )

Rally Speedway was released by Adventure International in 1983 (and later ported to the C=64). It’s a game not unlike Mattel Intellivision Auto racing, but much easier to control. I never had this title when I was a wide-eyed child of the 80’s, but I remember seeing ads for it in Antic, Analog, and Electronic games. I was a big fan of the Intellivision game, and always wondered how a similar game would play out on the Atari 8-bit computers. Written by John Anderson, this racer is fast, hectic, and fun. You push the stick forward to start your car, then use the left and right directions to steer. The car accelerates automatically, and the button is used to brake. I wish more developers understood that steering left and right AND pushing UP and down for accelerate and brake is an impossible task (I wish all of the Atari ST / Amiga developers in the 80’s had played this game).

Two players can play on the screen at the same time, If one of the player is too slow, his car will magically “catch up” to the leader car so the game stays competitive even if one player is much better than the other. It features two courses, and many game play option such as road conditions and top speed of the race cars . It also has some hilarious animations when your car crashes. I find this game fun. but very hard to play at top speed. I must just be too old for these games now. 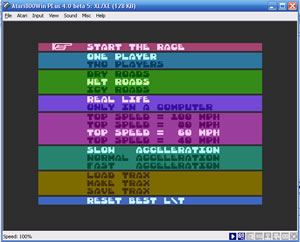 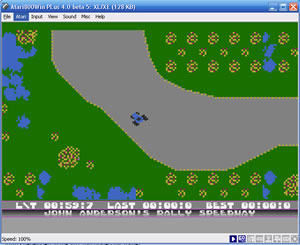 (Above: Rally Speedway being played with the Atari800win emulator. )

Montezuma’s Revenge was released by a couple different companies in the 80’s. Parker Brothers released and Atari 800 cartridge version, while the original Utopia Software Disk version was published in 1983 (a year earlier). The Parker Brother’s release is a 16K only version (a 5200 game that can only be played via emulation) and it eliminates many of the features of the 48K original. Contrary to Wikipedia, this game was originally released for the Atari 800 (they list every system but). This ancient tomb exploration game was written by Robert Jaeger (at the tender age of 16!) and released in 1983. It was also released for most other game and computer systems of the time.

In the game, you guide your hero, Panama Joe, through a series of ever more difficult rooms collecting treasure, solving puzzles, and avoiding traps and enemies. Equipment and keys are found along the way to help Joe in his quest to score as many points as possible.

It’s a pretty fun game. I liken it to close to Pitfall II but with many more puzzles, enemies, and treasures. The game has 100 rooms to challenge the user, and I am not good enough to get by more than 5 or 6. This is another game that I have marked to play again some time and I hope to find that time soon. I remember that we had a pirated version of this game (the real one, not the 16K Parker Bros. version). I think I even mapped out most of the rooms back when we had summers worth of free time. 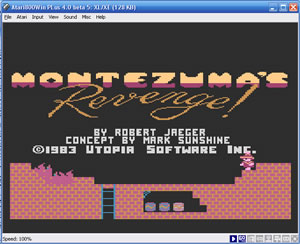 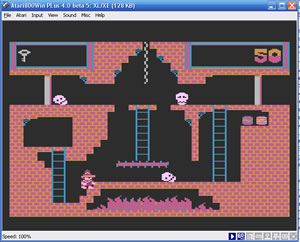 (Above: Montezuma’s Revenge being played with the Atari800win emulator. )

Mr Robot and His Robot Factory

In 1993, Datamost released Mr Robot and His Robot Factory by Ron Rosen and Robert McNally  for the Atari 800 . This is another gem that I remember having in the 80’s. It was blatant rip off of Miner 2049er, but with much better visual and sound effects. This one was also ported to the Apple II  (McNally) and Commodore 64. Ron Rosen was a very accomplished Atari 800 programmer, so I assume this was first published for the 800 and ported over. His other 2 games, Pacific Coast Highway (frogger) and Rosen’s Brigade were technically outstanding if not derivative of other works (like Mr Robot).

This is a very fun, but difficult, game with 22 levels to frustrate even the best platform gamer. The coolest part of this game was the level designer included. It allowed you to create up to 26 more levels to play. The object is to collect all of the power dots on the floor of each level. You must avoid mean looking fire balls, climb ladders, jump on to moving platforms, navigate escalators, etc. It is very similar to many other games of the time, but is a quality release and probably not well known. 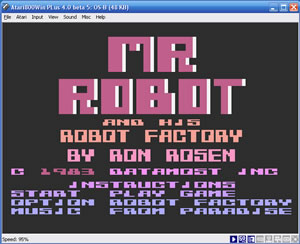 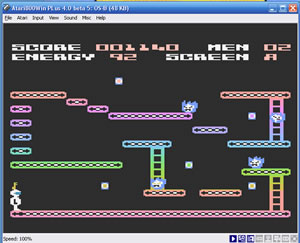 (Above: Mr Robot and His Robot Factory being played with the Atari800win emulator. )

A new version was released in 2007

That’s it for part 1. There are many many more Atari 800 games to go through. In the mean time, fire up the emulator, visit Atari Mania to obtain roms, and instructions (if available), and have an 8-bit blast.