I have loads and loads of Atari 800 games to play via emulation. I have tried nearly 1100 in my quest to try every game available. Today I decided to play Atari 8-bit degrees of separation. I will start with one random 8-bit Atari 800 game, play it, review it, and then follow its legendary path to other games. It will be a fun ride, so hold on to your hats for the wildest ride in the 8-bit wilderness.

Candy Factory
The first game is Gebelli Software’s Candy Factory, released in 1982, and programmed by Eric Knopp . Knopp would later go on to program Space Dungeon, Mario Bros, and Moon Patrol for the 5200 as well as various Epyx 8-bit games such as The Games, Winter Edition. It’s interesting to note, that Nasir Gebelli ,who helped found Sirus Software and his own namesake company, would later take his considerable skills to Square and develop the legendary NES game, Final Fantasy.. 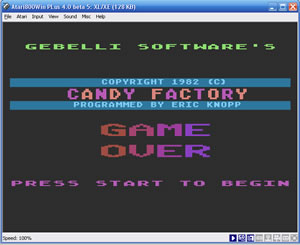 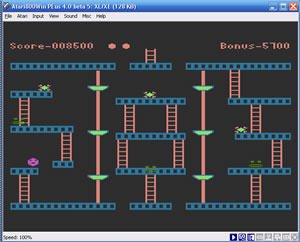 (Above: Candy factory being played with the Atari 800 Win Emulator )

As you can see, Candy Factory owes at least some of its heritage to Donkey Kong – the level screen above being almost an exact copy of that game’s 3rd screen. It’s a pretty decent platformer with good visual and sound effects. Nothing to blows the doors off, but everything is well made for an early Atari 800 game. You control a little bouncing head that must traverse the various screens and pick up what I guess are candies. You must collect as many of the candies you can, avoid the baddies, climb the ladders to the top of the screen and finally exit off the top. You get bonus points for doing this before the bonus count-down reaches zero.

After playing for a few minutes, I can tell you that is is very difficult. When you move left and right, your on-screen head bounces in the direction you push, which is a unique method of movement, but it results in some pretty frustrating game play. The “action button” will jump over baddies and gaps in platforms, but I found it pretty difficult to use. In any case, it is worth a look via emulation if you desire a challenging platfomrer.

Andromeda
I vaguely remember Gebelli software from the 80’s but I had no idea what other games they made for the Atari 8-bit computers. I decided that my next “degree” would be to try out one of their other games and see where that led. 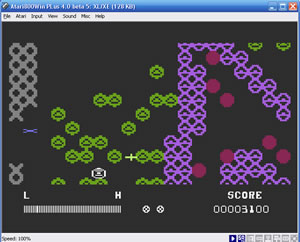 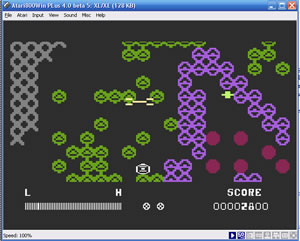 (Above: Andromeda being played with the Atari 800 Win Emulator )

In the above picture, you can see the fat calls are the green ones and the blood vessels are the purple ones. You must avoid the “+”, “X” and other antibodies until you eat enough to become large. You can eat blood vessels, but they slow you down. In any case this is a very “pac-man” like game not the Boulderdash cone I thought it was going to be. It isn’t a bad game, and while not a great use oft the Atari 8-bit’s abilities, it has nice music, sounds, and a few good effects. It’s obvious that Gebelli employed the abilities of some good young Atari 8-bit programmers before its demise in 1983. If they had remained in business longer, maybe they could have made some better games. Jamie Cummins went on to create some Amiga games such as Larry Bird, Dr J One on One.

Night Strike
With apologies to Gebelli, I was now tired of his early 8-bit releases and decided to look further at games programmed by the Solitaire Group. They were the developers of Andromeda above, and even though it wasn’t my favorite game of all time, I figured I might find some good games by looking at a developer rather than a publisher.

Solitaire group created a number of games for early 8-bit computers, and after taking a look at their catalog of games on AtariMania.com, I chose a game called Night Strike, programmed by A. Y. Kobayashi and published by TG Software. TG released one other pretty good Atari 8-bit game called Abracadabra.

In Night Strike you play the role of a tank, defending a city from invading planes. Your tank can fire 3 different weapons, 2 of which are detonated in the air with a second press of the fire button. 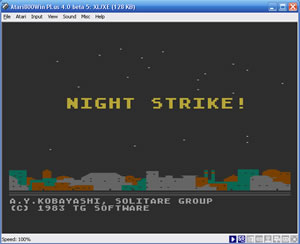 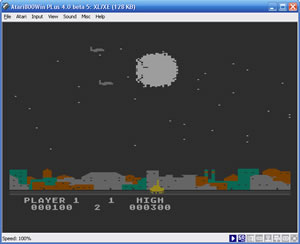 (Above: Night Strike being played with the Atari 800 Win Emulator )

The game is a little like a combination of Atari 2600 Air Sea Battle, and Missile Command. It is fun for a few minuets of blasting action, but not much more. It is pretty difficult, but not a bad game. It shows little polish that you might expect from a great 8-bit release.

Spelunker
I had to stretch a little to get to a much better Atari 8-bit game. I was going to check out some other TG releases, but I decided to move in a new direction. Solitaire Group made one game for Broderbund called “Track Attack”. Instead of trying out this game, I decided it was a valid part of 8-bit degrees of separation to try out another Broderbund game. I went through their catalog and found one in Spelunker. This is what makes 8-bit degrees of separation so fun – finding some link between two games (even bad ones). In the end, you can find decent games to play via emulation, or to purchase on ebay and play on real hardware. This is one such game.

Broderbund is one of the few companies from the early 80’s that is still around in one form or another.They pretty much release productivity, educational, and budget game titles now, but they were a legendary publisher and developers of 8-bit games. Spelunker was originally created by Tim Martin and MicroGrphicImage, but later bought and released by Broderbund and ported to the C=64 and NES. 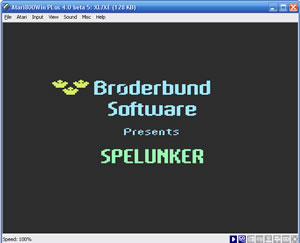 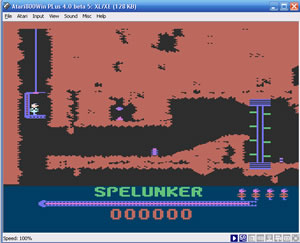 (Above:Spelunker being played with the Atari 800 Win Emulator )

The goal of the game is to traverse down through the cave and obtain the treasure at the bottom.You must avoid natural obstacles such as pits and rocks (can be blown up), bats who want to dump their deadly guano on you, and interestingly, the ghost of a fellow, dead spelunker. The player searches for items to help him such as dynamite, flares and keys. Each has a special use to aid the spelunker in his quest. There are 6 levels, and each level consists of a number of screens. It is a rather large game, and it is very fun to play. It is a complete BITCH though and it becomes insanely difficult to complete.