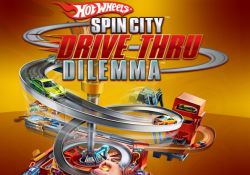 Finally, my newest game for Hotwheels.com has gone live!  “Hot Wheels Spin City Drive-Thru Dilemma” is my casual game “sequel” to “Hot Wheels Accelracers Track Mod“, released in 2005.   It is not really a “sequel” though, as it’s game-play is based on the “Diner Dash” model, not on the “Pipe Dream/Rocket Mania” model of Track Mod.  However, the two share a lot of the same code-base, and they are both “puzzle” style games, and the both are outside the normal style of games that we put on hotwheels.com.

I did the game design, progamming, and created the music for this game.  The graphics were created by Ben Liska from my basic graphical skeleton.   I’ve been playing this game for so long, I can no longer tell how easy or hard it might be.  I spent about 3 weeks play-balaancing the game, and the testers told me it was just right, so I believe them. However, my gut feeling is that it could probably use a bit more tweaking.

I will follow-up this post in the next few days with a technical discussion of the game development.

Anyhow, please try the game and tell me what you think.