Vector Runner is a fast paced classic wire frame vector game in the style of the Tempest and Battle Zone. I found the game on the Congregate.com web site in my weekly search for classic style games. I can’t find any information on the actual developer (it could very well be LittleGrey Media), but the author (who is nameless) says on Congregate, that this is the second game he has made for DigYourOwnGrave.com. The game page on this site contains a link to a pretty funny game called Oh The Huge Manatee (a play on Oh The Humanity). I would guess that the same author made both games. In any case, I searched for the name of the actual author and could not find any mention of a name. 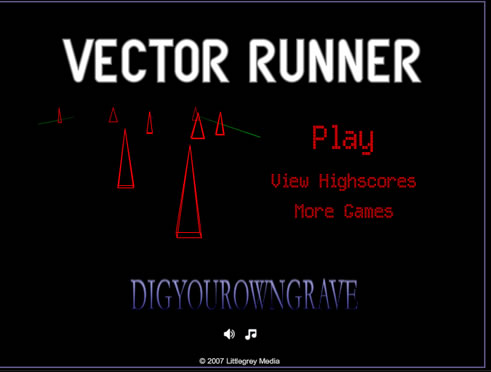 Even before the game has started I am pretty impressed. I love the retro pixel font and the sparse black play field background. At this point I have no idea what the game is about, but it reminds me of Tempest, so that’s a plus. Notice there are no visible author credits on this screen. 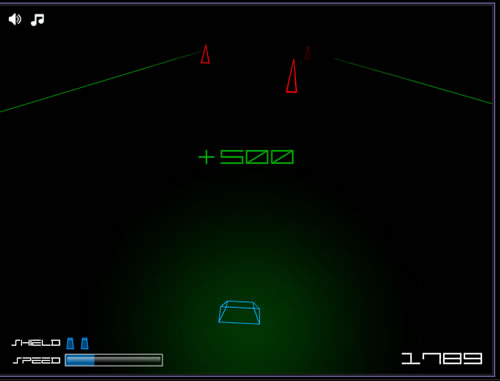 I was expecting some retro shooting action, but what I found was something I like anyway. The basic premise of the game is to steer the blue wire frame 3d box left and right with the arrow keys while dodging the oncoming obstacles. You gain points by staying alive as the 3d perspective landscape begins to accelerate at a breakneck rate. You receive a small number of points for staying alive, but get large bonus points for collecting colored boxes. You have 3 shields and can pickup extras as well as other power ups (such as invincibility) housed in the colored cubes. The game gets faster and faster the more you progress. As you steer left and right the entire screen rotates slightly and is very effective in conveying both speed, inertia and confusion as the obstacles start to fly by as incredible speeds. That’s pretty much it as far as the basic game play. I’m not very good at it yet, so I can’t give an exhaustive review of the play progression, but to me, its a fun ride.

While the wire frame vectors are basic, they are very clean and perfect for this type of game. The bonus score animations and screen layout are nice and overall, I was very pleased with the experience. The sound effects and pretty good, and add to rather than subtract from the overall experience. The blur glow of the vectors is a nice effect, and overall this game would have eaten up many a quarter in the early 80’s.

This is a very well made, ambitions game. The 3d perspective and speeds needed to make the game work well are very difficult to achieve in Flash. I am unsure when this game was released and whether or not is is coded in AS3, but none the less, from a programming and game design perspective its quite impressive. It might not please some of the young-ins on Congregate and other portal sites. Some of these gamers/serial comment writers have absolutely no idea what it takes to make a good game (well, some do, but most players just don’t understand the amount of work that goes into even the simplest of games).

I want to shoot at stuff in my games. So I would have added some way to pick up a blaster of some sort and blow away the obstacles. That would be a satisfying game for me, but as it stands I am very impressed.

If you are the author of this game and want to see your name in bits, look me up at info@8bitrocket.com.

Note: After checking out the digyourowngrave.com site a little further, it looks like the game was releaed very recently, and the author is an admin on the site.