In Part 1 we covered creating an array of pre-calculated vector values for 36 angles. These 36 angles were used to move the player ship on the screen in one of the 36 rotated directions. We also covered a basic animation cache from a library object by rotating its container and taking a BitmapData snapshot of each frame. We then created a simple game engine and got the player ship moving about the screen, thrusting in the right direction. We applied some simple friction and inertia principles and used a BLIT technique on every frame to to copyPixels to a single display object.

In Part 2, we will take a smaller bite and cover how to cache the animation of a library object with a frame based animation for our asteroid rocks. We will add the rocks to our game loop and see them animating on the screen, running through their cached animation frames and being BLITTED to our single display object with copy pixels.

I created the rock frames by in a round about manner. I am using the Atari 7800 version of Asteroids as my basis for this game, so I started by firing up my MESS emulator and playing the game. The 7800 version of Asteroids is not as well known as the arcade version, but it was my favorite version, and one of the best games released for the 7800. It has multiple different colored and shaded rocks to shoot, but I just need one for the tutorial, so I chose to model the green rock. To do this, I decided to record the screen while I played the game. I fired up my copy of Replay Video, and had it record the screen for 30 seconds while I played 7800 Asteroids in MESS. I then brought the video into Sony Vegas for editing. I dropped the video into the timeline in Vegas, and used the frame advance scroll bar to move a couple frames at a time through the video of the game play. I zoomed in on the green rock and at each key frame change, I saved a JPEG of the screen. I pulled all of these JPEGs into Fireworks and editing them each down to an 18×16 image. Then, I deleted the background of each frame (there were 12 good frames). I save each one out as a .PNG file and imported all of them into Flash CS3. I built clip in the library called “rock” with one frame by putting a PNG on each of 12 key frames.

The rock clip in the library looks like this (at 200% zoom): 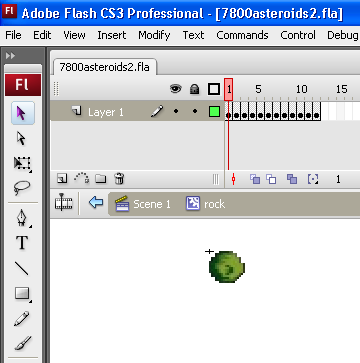 As you can see, it is at 0,0 on the stage. To actually cache a library clip with timeline animation, we must add this clip to a holder clip that we can export. The holder clip is called “rockToCache” in the library, and its stage looks like this:

The “rockToCache” clip has an instance of the “rock” clip set at 0,0. I increased the size from 18×16 to 36×32. That will make it more pixilated, but I think the other version was too small. If this was for a commercial game, I might clean up all of the frames by tracing over vectors before and then zoom in if needed. I gave the “:rock” clip an instance name of “clip” and set the “rockToCache” linkage class name to “RockToCache”.

Now, on to the Actionscript needed to cache he animation ands add rocks to our game loop.

In our Main.as class, I have added these lines in the variable declaration section (below the class definition and before the constructor).

aAsteroidAnimation is an array that will hold 12 BitmapData objects representing the 12 frames of animation in the rock clip.
asteroidAnimationTimer is a Timer object that that will count up to 12.
asteroidHolder is an instance of the RockToCache library clip. We only need one and it will be used exclusively as a holder to run through the “rock” frames.
aRock is an array that will hold all of the instances of our rock objects for game play.
level is a integer that will hold the current game play level. Eventually, when we add in collision detection, we will have the game move to a new level when all of the rocks are cleared.
rockPoint is a pre instantiated point object used in the copyPixels operation for all rocks to the canvasBD. The rockPoint will be changed to the x and y coordinates of the current rock before the copyPixels is completed.
rockRect is a static rectangle instance that simply represents a bounding box for the max size of our rock (36×36).
levelRocksCreated is the first of our game control variables. When we start a new level, this will need to be set to false;

[/cc]That sets up the variables needed for this part. Now, there was a change to the animationTimerCompleteHandler from part 1. We have commented out the startGame() call and have replaced it with a call to a new createAsteroidAnimation() function.

The createAsteroidAnimation() function sets up the Timer based loop that will jump to each frame of the “ship” library clip and cache (or store) the pixel data from that frame in a BitmapData object. In part 1, we stored all of the rotations of the ship clip my manipulating the rotation property of its holder clip called “shipHolder”. For the rock, we will use a different method. On each iteration we will “gotoAndStop()” the next frame on the timeline and “draw()” those pixels to a BitmapData object, and then add that object to our aAsteroidAnimation. I did the rock this way because it is the most likely delivery method that a designer might give you for a tween-like animation. We will explore one more method of creating an array of BitmapData objects when we use a sprite sheet to create the animation loop for the playerShip’s missiles.

The cacheAsteroid() method is called 12 times and on each call it draws the current frame of the rock clip (referenced as asteroidHolder.clip) to a new Bitmapdata object. That object is added to the aAsteroidAnimation array.

The asteroidAnimationTimerCompleteHandler() method simply starts our game. The method that starts our game will change as we add to the game. It will always be the last method of the setup phase that calls startGame.

The runGame() method has been modified from the part 1 version. We have added 2 functions to handle rocks. The updateRocks() method does all of the work in creating the initial rocks for the game (or level) and also updates all of the rocks on the screen based on their individual dx,dy, and speed variables.

The updateRocks() method takes care of two main duties for the rocks. Currently, the first thing it does is create rocks for the level and once it is does, it sets levelRocksCreated to true; We do this here out of convenience, but in a later part of this tutorial, it will probably be moved to a section that inits all new levels. We haven’t implemented our gameLoop or game control structure, so it is fine here for now.

The other important task for this method is to loop through all for our rocks on each game loop timer tick and update their x and y properties.

if (!levelRocksCreated) {
for (var ctr:int=0;ctr<level+2;ctr++) {
These two lines begin the iteration to create the rocks for the level. I chose to create 3 rocks for the first level and then add one for each additional level. At some point we will put a cap on the total to start with, but for now we will not do so.

var tempRock:Object=new Object();
var randInt:int=int(Math.random()*36);
var randInt2:int=int(Math.random()*asteroidFrames);
tempRock.dx=aRotation[randInt]. dx;
tempRock.dy=aRotation[randInt]. dy;
tempRock.animationIndex=randInt2;
Here we create a generic object to hold our rock. Next we randomly choose a random number from 0-35. We will use this to index our aRotation array do obtain random dx and dy vectors for this rock. We also choose a random frame of animation for our rock to start on so all of the rocks don’t rotate in sync.

tempRock.x=20;
tempRock.y=20;
tempRock.frameDelay=3;
tempRock.frameCount=0;
tempRock.speed = (Math.random()*level)+1;
aRock.push(tempRock);
This set of code takes care of some setup for the new rock. First, we currently are starting all new rocks at 20,20 on the screen. We set the frameDelay for the rock at 3. This will count 3 frames between each animation change so our rock won’t appear to spin too fast. The final setup for the rock is to give it a random speed to multiply the dx and dy values by. We randomly choose a number between 0 and the current level, then add 1 so if a number below 1 is randomly selected . We do this so our multiple won’t create a speed slower than the basic dx and dy values. Lastly, we push the rock to the aRock array.

The last part of this method moves the rock to its new position in memory and then checks to see if it is off the screen. If it is, it warps it back to the other side. I haven’t put in the centerx and centery values for the rocks yet, but we we add them for collision detection in a later part of this tutorial series. When we do that, we will revisit this code and update the centerx and centery before.

These two lines multiply the rock’s current movement vectors by the current rock speed. The final lines of the method handle the warping off the sides of the screen based on the current x and y values for the rock.

for each (var tempRock:Object in aRock) {

The final new method in part 2 draws the rocks to the canvasBD. It’s basic job is to loop through all of the rocks, set the rockPoint variable to be the location of the current rocks upper left-hand corner, and then BLIT the pixels of the rock to the canvasBD.

That’s it, below is the new working example. Use the up arrow to apply the thrust, and the right and left arrows to simulate the rotation of the ship.