This week we once again  visit Agame.com and Mochiads to find games that we love to play. Our choices: Captain Zorro, Uchuforce 2, Speed X, Diamond Frog and Midnight Race.

Finding good games to play is not as easy as it sounds. There are so many stinkers out there now, sifting through all of the junk to find a few good games seems to take an extra long time. Any way, here are a few good ones from the bunch. I had to search the sites for some games I like to play, so not all of them are brand new.

Captain Zorro by www.gamezhero.com (on agame.com)
Captain Zorro is a retro shooter combo of Xenon 2 and Choplifter. Your goal is to shoot everything in sight and pick up the stranded people on the ground. You can use both the mouse and keyboard to control your ship. You can pick up heath and super shots along the way. 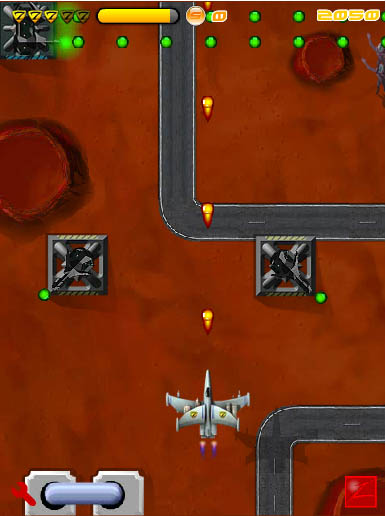 Captain Zorro is a pretty fun game. Some quality time was spent on the visuals and music. I find the game play a little on the slow side, but it was still a blast to play.

UCHUFORCE 2 by babarageo.com
The description for this game claims that is is like space invaders, which is probably the absolute most lazy ass attempt at describing a game I have every read. This is a much like space invaders as Grand Theft Auto IV is like Wolfenstein 3D. Yes, you shoot at stuff, but this game is more a pretty basic (but fun) retro vertical shooter. It is a lot like a basic version of the game that came with my Sega Master System. I forget the name, but it was a pretty excellent for the time vertical shooter. 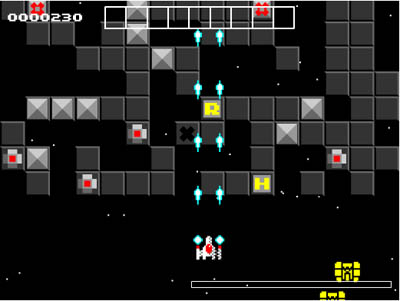 Uchuforce 2 has beautifully retro feel to it. It would have been an 8-bit classic.

Speed X by ABE @ 2008 (wtf?) Many of these games have the true credit removed, so I can only go on what I find.
Speed X is basically Moon Patrol on some serious acid. You control a Robocop style future police officer in a jet powered vehicle. Your goal is to blow everything you see up. You control your gun up and down with the mouse and use the W A D keys to move up, left and right respectively. 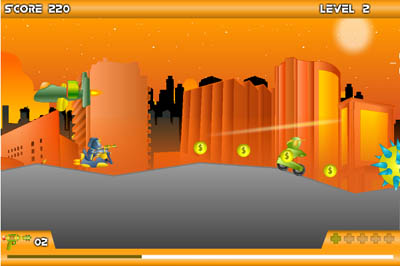 There are some pretty novel enemy units to destroy in this action packed retro blast fest.

Diamond Frog by www.goplaysushi.com
Diamond Frog is modern take on the classic snake game, but with added features. You are a frog and you are tasked with collecting diamonds that appear in the play field. You must avoid the crushers that move back and forth, up and down on the screen. To aide you, at your disposal are bombs that will create a vertical blast radius and take out the crushers.

Midnight Race by DjSonix
Midnight Race is a rather simple racing concept in a very well done package. The file download is quite large, but the final product is worth the wait. You basically dodge cars in a 3rd person, 3-d (from top and behind) perspective. The control is exactly like a hand-held game my sister game me for christmas in 1978. 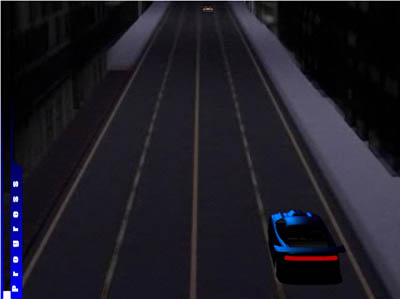 You’ll have a fun few minutes playing Midnight Race. As you can see, the visuals are very impressive.

That’s it for this time. I hope for there to be some more good games out there next week.