This week we take a look at 4 games by MyGame.com and a great new pinball title by gamingyourway.com. I only call this a biased pick because I choose mostly retro style games to showcase. Plus, we all bring our own biases to the table when we critique anything, so there there is no way this wouldn’t be biased. I have not been asked by the authors to write about their games and I have not received any compensation to do so. Now that we have cleared that bit up…

Robot Territories – by Mygame
Robot Territories is a special shooter that is very well done. You play a mech-like robot who must eliminate all of the attacking enemy. The 20 levels look and sound very polished. You have both bombs and missiles as ordinance and you score extra points by re-shooting kills once they are air born! There are a significant number of different enemy types for you to rain your awesome arsenal upon. 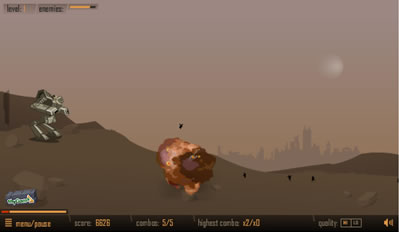 Hold down the mouse button until the meter on the left fills completely for an “shock and awe” display of fire power. This one isn’t new (it was published in February), but I don’t get a chance to play all games right when they are released, so it was a treat to find it. I can’t find any more developer info than just plain Mygame.com (a very cool portal in its own right).

Law of the West Pinball by Gamingyourway.com
LOTW Pinball harkens back to the classic arcade days when a popular video game’s theme was re purposed and configured into an arcade pinball machine. The original Law of The West is a very nice 16-bit style shooter. The Gamingyourway team has taken the general theme and created a fun pinball game using the Box2d physics engine (at least I think they did). This is a significant achievement in it’s own right as using a general purpose physics engine to create a game that is later re-skinned with bitmapped images is a painstakingly tedious process. Thankfully, the game is not tedious at all, but rather a blast to play! 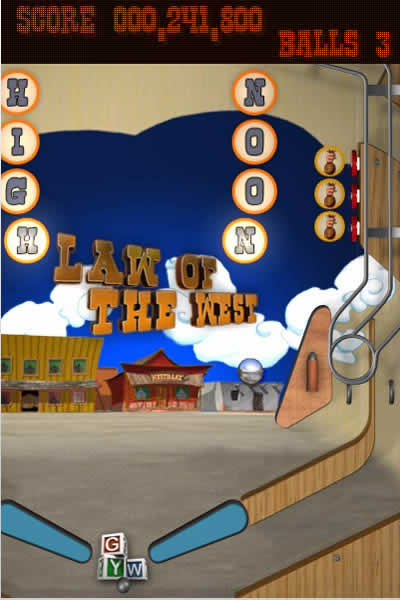 I have been playing a lot of Williams Pinball Classics on the Wii lately, and after playing this pinny game, I can say that it includes everything a pinball fan could love. The table is a built in a relatively simple but classic late 70’s / early 80’s style. That being said, there are enough ramps, targets, bumpers, and more to keep your interest up for quit a few plays. I am uncertain whether there is multi-ball or if any of the table accomplishments are tied together for special bonus scores, but it will be a blast to play and find out.

Tevlon 3D by Mygame
Tevlon 3D is quite the technical accomplishment. It uses Papervision 3D to create a “behind and above” style blaster. Your goal is to use the lower left-hand radar screen to seek out and destroy all of the enemy (represented by yellow dots). To me it seems (intended or not) like 3D update of Star Castle crossed with Bosconanian. These were two of the best early 80’s arcade blasters, so you are in for a treat. 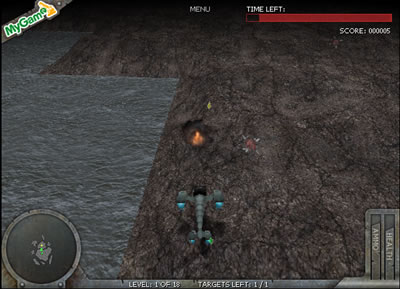 You use the arrow keys to control your ship Asteroids (or Star Castle) style. The space bar is used to fire your primary blaster. This is a 3D game, so they have added in the ability to strafe with the Z and X keys. Don’t waste any time waiting to try this one out, you’ll love it.

Astroflyer – by Mygame
Astroflyer is a very simple, but well made game. Your goal is to traverse the first person perspective landscape and attempt to guide your ship through the stars while avoiding everything else. You have the mouse button at your disposal to speed you up if you dare! 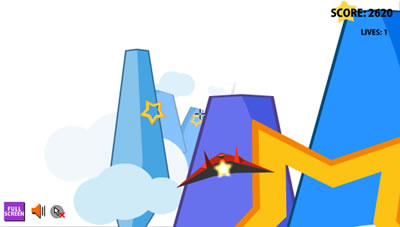 This is a very enjoyable gaming experience. It’s hard to define exactly what makes this game so fun to play. The music fits the style very well and the game is very polished from top to bottom. This title is very unforgiving though and (at least early on), one touch to anything not a star will send your game and your ship spiraling out of control..

Star Ship – by Mygame
Star Ship is a pretty standard blaster. That’s not a bad thing and it wouldn’t be on this list if I didn’t find it very fun to play. It has all of the elements that make a good late era 8-bit game – a story line to follow, weapons and upgrades to purchase, and wave after wave of enemy in patterns to blow away! 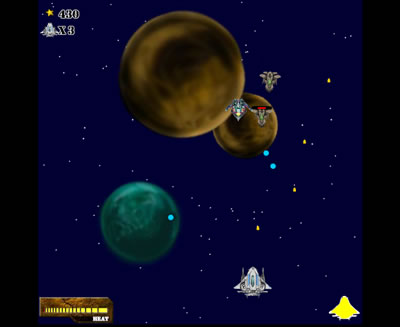 The mouse is used to control and fire in front of a background composed of planets and stars scrolling in parallax levels (almost exactly like I am creating in my own new game). It reminds me of a great Atari ST / Amiga / C64 title called Better Dead Than Alien. And you know, if I have to resort to an Amiga or Atari ST reference, it must be a good game (at least to me, as the Better Dead Than Alien reviews I found are not very flattering). Star Ship is fun and well worth your time.