I have been working all weekend long to put the finishing touches on Jacks’ Beach Blitz. I failed to hit my deadline of having all 15 levels complete by today, but I have put a 99% complete 5 level preview on both Flash Game License and on GameJacket, hoping for the cash up front ad sponsorship. If none of those work out, I will be more than happy to just put it up with Mochi or GameJacket ads and promote it myself. The point was to make a game that I wanted to play in a short amount of time, but have it contain at least a measure of quality. Of course it isn’t going to win any awards for super visual effects, and it aint (sic) going to win over too many of the blammo kiddies. But when you have so little time to actually sit down and do what you love (make games) rather than what you have to do (pay the bills), the nuances of success are much brighter with ever smaller triumphs.

Here is the description I just came up with for the game. It describes the major functionality and most of the features. I only have 5 levels complete so far, and there is a picture of each of the first 4 after the description. A lot of the tiles animate, but they will not do so in the static pictures below.

Full Description
Jack’s Beach Blitz is the cousin to 8bitrocket Pumpkin Man. In the semi-sequel, you play Jack, an angry Jack-O-Lantern whose girlfriend has been kidnapped while on vacation. As Jack, you travel the beach setting levels, collecting power-ups and ammo to blow the bad guys to smithereens. On most levels, your girl friend will be trapped inside some type of locked chamber. You will need to find a way to get her out and then find the exit on each level. Keys will open doors and sand buckets will clear seemingly unbreakable water walls. Umbrellas will transport you to towels of the same color . Be on the look out for ice cubes that will temporarily freeze the enemy and SPF lotion that will provide you with temporary protections from them.

If you have the unfortunate luck to accidentally walk on TAR, you will be slowed to a crawl until you wash off in the shower or find a protection power up.

You will also have POW power-ups to upgrade your weapon and ammo, BONUS multipliers to find, and KILL power-ups that will knock out all of your enemy for a period of time. Your ammo is limited, but there are candy and treats on each level that will provide you with a small re-supply. Also, each Jack starts life and the next level with 25 ammo added to what you previously had. This will help on those levels where you fire your last shot to hit the exit or die a valiant death with no ammo remaining.

Keep collecting 10 POW power-ups in a row without dying and will have a massive super weapon at your disposal! When you die though, you lose your upgrades.

The shells that generate and re-generate enemy can be destroyed with a number of hits, but watch out as you are vulnerable from all sides while concentrating on blasting them.

Also, you can shoot through the small spaces between any two un-walkable objects. Use this to your advantage.

Every time you kill an enemy without dying, you will help increase your bonus multiplier. The higher the bonus multiplier, the higher your score and bonus. The higher your bonus earned on any one level, the better the chance you will earn and extra Jack to help out on your quest. Also, each level contains a bonus timer. You will earn extra bonus for all of the time left on the timer when you complete a level.

The Arrow Keys move up down-left and right. The Space Bar fires. M will mute. The sound, and P will pause. 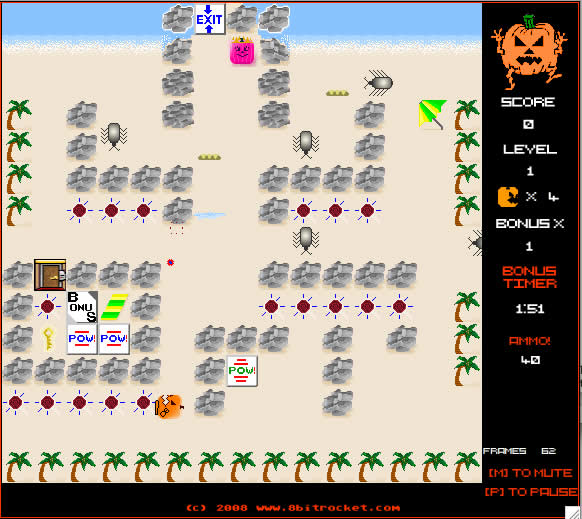 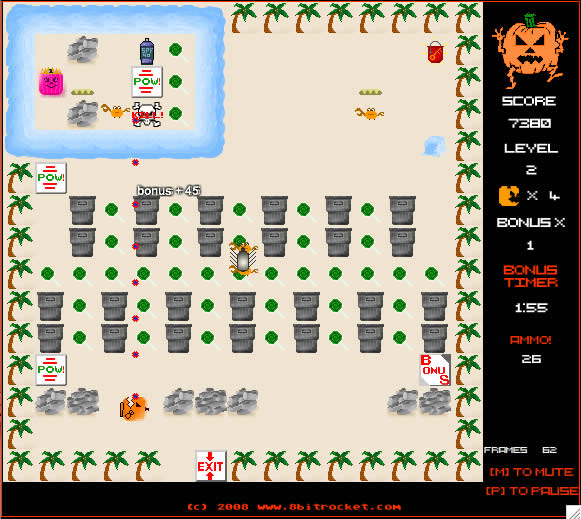 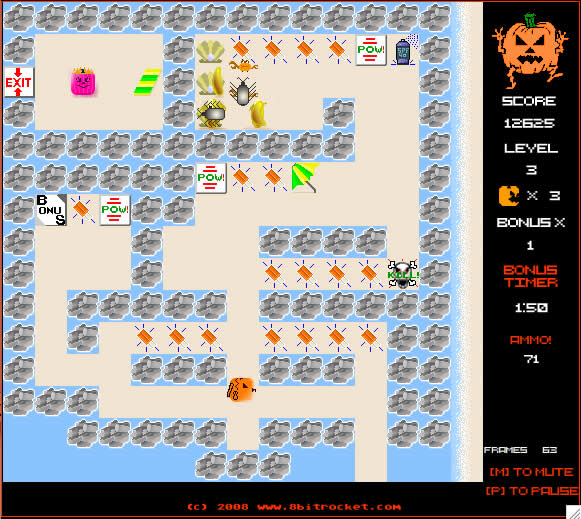 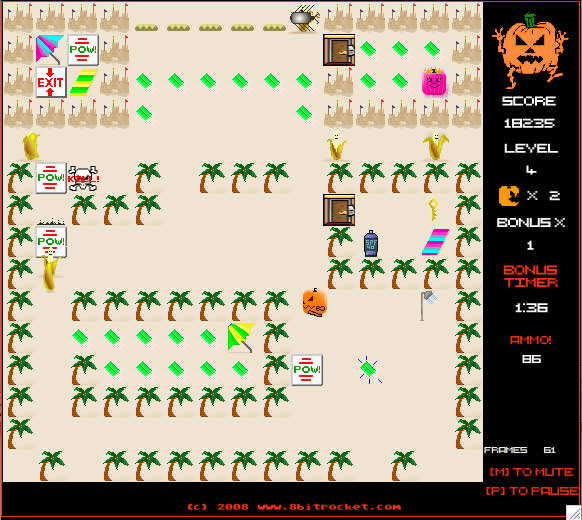