The 56K Connection: Olive War ‘ Attack 1: Veggies from above review.

The 56K Connection: Olive War ‘ Attack 1: Veggies from above review.

Editors Note: Marz Nolte is the newest 8bitrocket editorial team member. She brings a much needed female voice to the pages of this site. And yes, she does really only have a 56K modem.

I like all kinds of games; puzzles, adventure, shoot-’ems or strategy, it all depends on my mood. But sometimes, a good description is all I need to try one on line.

‘You are an olive with a gun, the latest in a long and proud line of heavily armed condiments, and the planet Salad Bar is under attack from evil flying vegetables, ”

Yes!
I know that this will be a Space Invaders type of thing, but hey, an olive with a gun? Evil veggies? I gotta try that. 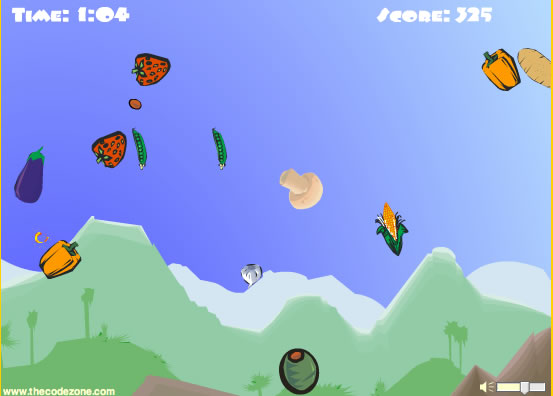 Well first off you are an olive, a green one to be exact, but you have no gun. Your little olive body shoots pimento pieces at the falling veggies. Secondly there seems to be little indication that you’ve actually ‘hit’ the falling veggies on the first level, because they don’t explode or disappear. Like Space Invaders you move left and right by the arrow keys and pummeling the space bar flings the pimento projectiles. Unlike Space Invaders, an olive is oval and rocks on its axis, so by using the arrow keys a player can shoot at various angles to annihilate the veggies instead of just shooting straight up in the air.

Level 2 brings on a strictly carrot invasion. Singularly or in bunches, the carrots have a satisfying pop and disappear when hit. This level warns of MIRV or ‘Multiple Independent Re-Entry Vegetables” heh. Or in other words the carrot bunches split and fall independently when hit.

Level 3 is the last level and is replete with Armored Artichokes. The Artichokes are a bit like the space rocks in ‘Asteroids’ it takes a few shots to kill them, as they only get smaller and fling off in different directions each time they’re hit.

Needless to say Olive War is a ‘cute game’, it might even qualify as a ‘friggin cute game’, if they continue to make more levels. I liked Olive War, there is not much to it right now, and those veggies need to explode on level one, but it looks really promising and I look forward to new and exciting chapters from Planet Salad Bar.

Lastly, but no less importantly, my deepest apologies to ‘the stick’, as referenced in my review of ‘Body Ladder’ because according Ben Dobbin, Associated Press writer November 7th 2008, ‘The lowly stick, a universal plaything powered by a child’s imagination, landed in the National Toy Hall of Fame on Thursday along with the Baby Doll and the skateboard.’

Wow, National Toy Hall of Fame, that’s bit-time! I had no idea ‘the stick’ had so much political power. Congratulations on finally being recognized for the exciting instrument of play that you are. But you still suck at killing zombies. No offense.