Note: New Star Soccer 4 has been released by Simon Read and his team at
Newstargames.com. Being a supporter of both the world footie
game and independent computer games, especially Read’s Masterpiece, New Star Soccer
3, I have been spending an inordinate amount of my time playing the new
version. To prove to all readers the depth and brilliance of the game, I will
periodically give updates based on real game happenings.

8bitjeff started his professional soccer career as an 18 year old with the
LA Galaxy on training contract. Finances were very tight on just a few
hundred dollars a week, and the early season constant training put a huge
strain on both his personal and professional life. He had two disastrous dates
with local girls who were disgusted to see that his tiny apartment was filled
with only the cheapest gym equipment he could afford and nothing else. Having
no car and no time to spend with family and friends, all he could talk to his
two dates about was the training ground, and it was obvious that neither girl
was interested enough to last more than a couple minutes with poor 8bitjeff. 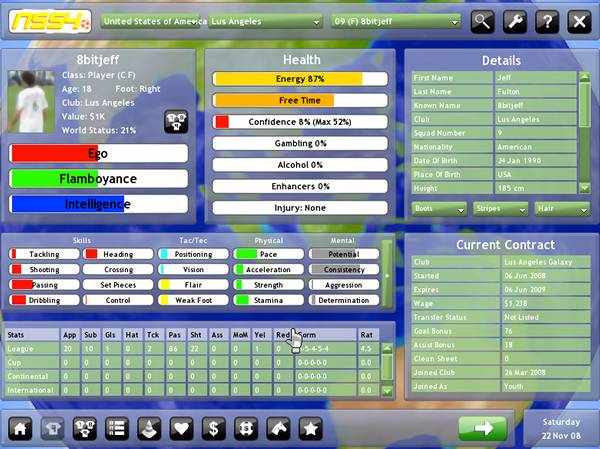 On the field he faired only slightly better. The first 10 games were a
trial, and although he possessed some very raw talent, an eye for the goal and
some nice passing skills, after 900 minutes of action he only had one goal, and
handful of passes completed, no assists, and very low confidence. Even though
he was not very impressive in his stint, this is the MLS, and the Galaxy are
hurting for almost anyone who can don some boots and kick a ball in the right
direction. So, after the signing the $1200 a week offer, 8bitjeff found himself
cast to the bench while Galaxy stars like Lendon Denovan (sic) ( the game
changes names on purpose for legal reasons) light up the league tables just as
in real life.

30 games into the season, the Galaxy (just as in real life) is mired at the
bottom of the Western Conference table, and 8bitjeff has seen limited minutes
as a sub with no more goals and still no assists. Fueled by NRG drinks and low
confidence, he has been giving his all in training, though participating mostly
in 5-a-side indoor matches rather than attempting the training challenges that
he finds difficult to master. He saved enough money to add a treadmill to his
growing stable of indoor gym equipment, as well as purchase a surf board and a
cheap car. With still no dates on the horizon and the limited game action, he has
spent his ample fee time with friends and family. He is enjoying his first year
of professional football, but with his confidence as low as it is, he is going
to have trouble proving to the manager that he should get more game time.

Jeff’s next step is to continuing training hard and trying to compete for a
spot in the starting 11. With some hard work, and a little luck (that means
you, Alen Gurdon, getting injured), he will hopefully start scoring goals soon.
He can’t make it to the Premier League by ogling Devod Beckhom’s wife and Katie
Holmes from the bench, he has to get on the pitch and show his stuff. (note
Victoria and Katie are NOT in the game, but everything else described is).