California wildfires have caused more than 60,000 people to be
evacuated from their homes and we’ve had 3 days of constant
television coverage of the devastation.  Although
I’m not in
any imminent danger, soot and ash is flying through the air covering
everything with a layer whitish gray flakes, the sky is glowing
yellowy-orange and the news reports are telling us to try not to
‘breathe’ too much.

At the start of Fisher Boy the player is given a harpoon:
which
is classified as ‘Basic Weapon:  Turtle
Class’.
As play progresses the player is able to go to the Weapon Shop and buy
upgrades and better weapons.    The player
picks a name
and it is listed at the top of the screen with the blunt title of
‘Fish Killer’ underneath.  This was my
first
indication that persons to whom English is not their first language may
have created this game.  I love funky translations.

As the player starts the adventure, a map of ocean and islands rolls
out, by clicking on the red dot (‘select spot to
go’)
you’re ready.  I also know this because the screen
told me,
‘YOO. BURN YOUR SPIRIT!’ ‘ Which I
interpreted to
mean, ‘It’s time to start your adventure, go have a
jolly
‘ol time’. 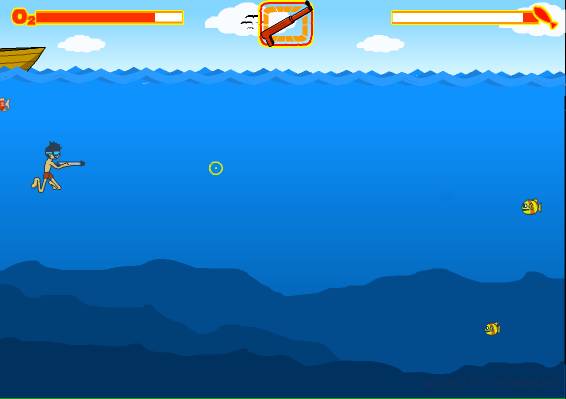 By using the A & D keys the player moves the Fisher Boy left
and
right, by using the S & W keys the player moves Fisher Boy up
and
down.  Pressing the ‘E’ key, will pause
the game and
pressing the ‘Q’ key does something described as
‘PRESS Q TO ALTER QUALITY’.  Feeling
adventurous, I
pressed the ‘Q’ key several times.  It
didn’t
seem to do anything other than squish the playing screen sideways about
a millimeter.  Obviously I do not understand quality but my
Fisher
Boy did just fine with out it.

Fisher Boy is geared out with mask, red trunks and weapon and the idea
is to use the letter keys to move and the mouse to aim and
fire.
On each level there is a particular number of fish that the player has
to harpoon before moving on.  The playing screen is cute and
clutter-free; a small dock, a strip of sky and clouds with an
occasional seagull fly-by are in the top quarter and the rest of the
screen is ocean.

The First level is kind of a tutorial.  There are bunches of
little fish to aim at and one shark.  Fisher Boy has a limited
amount of air  (‘O2’) and must rise to the
surface
periodically or he passes out – or as the game says,
‘YOU’VE FAINTED’.  I love that,
no stress,
Fisher Boy doesn’t drown, he just faints and you have to
start
the level over.

Other things that steal your air are sharks.  No man-eating
with
these guys, they just bump into Fisher Boy, he lets out a squeal and
the shark steals your oxygen.  However, if Fisher Boy is at
the
surface getting air, the shark just passes by, it doesn’t
even
nip at Fisher Boy’s toes, just floats on by.  The
only thing
that seems to piss off a shark is hitting it with your wimpy
harpoon.  I’m guessing that later on, with a better
weapon,
the player may be able to kill the sharks – but not at the beginning of
the game.  By hitting a shark it will make a bee-line over to
where Fisher Boy is an basically sit on him and suck out all his air.

Fisher Boy moves around the screen easily and his animation of his body
and kicking legs is fantastic.  It really looks like
he’s
gliding through the water like a pro ‘Fish Killer’.

Once a level is finished, a player can move on to the next spot on the
map or go to the Weapon Store to buy, sell or upgrade.  Each
weapon has a rating for Strength; to make your shots stronger, Agility;
for a shorter reload time and uh, Brutality; which is described as,
‘More arrows in one shot! More brutal!’ ‘
Okay, I
guess it’s accurate in that you do get more arrows, but
nothing
in Fisher Boy could really be described as
‘brutal’.

Fisher Boy qualifies as a game that will be very low on a
player’s stress meter; there isn’t even a time
limit.
The player has unlimited shots and can take as much time as they want
to shoot and aim and even swim around with the fishies, as long as they
don’t bump into the air-sucking sharks.  As the
levels
progress, there are less small fish and jelly fish to shoot and more
larger fish that require multiple shots and will try to suck your O2 if
you give them a chance.  All in all this game is easy,
addictive
and interesting ‘ but won’t satisfy hard-core
gamers who
need shock, stress and danger fed to them through an intravenous tube
for ultimate satisfaction.  In other words, it’s MY
type of
game.