Today we go to the farm – it’s time to race and your pig is
entered.

PigRace is an easy, good-looking game that involves navigating your
piggy through various obstacles to get to each level’s finish
line.  Using the tried and true Frogger-ish motif the player
uses the up and down arrow keys to move the piggy in one of three
lanes, and pressing the space bar causes the piggy to jump.
There are objects to pick up such as acorns, carrots and apples and
there are things to avoid such cows, bales of hay, mud puddles, logs,
pumpkins and small ponds. 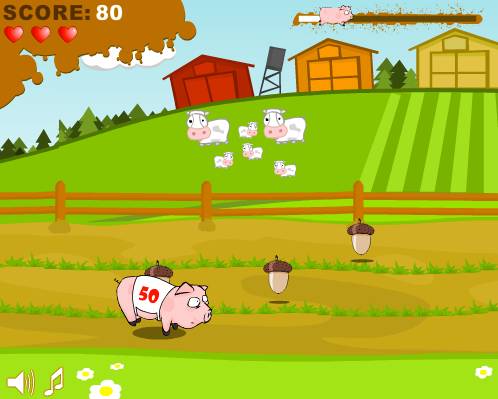 It starts out verrrry easy and lulls a player into feeling superior,
but as the levels progress more and more obstacles are added until your
piggy is jumping sliding and ricocheting all over the course.
And if your little piggy crashes into an object, there is a cute cut
screen that shows him splayed out, head spinning with
‘headache stars’.  More than once I
reached up and rubbed my own forehead when my piggy crashed, bashed or
tripped headlong into a puddle or the side of a cow.  If your
piggy crashes you lose a life which is represented as a heart on the
screen ‘ the game starts out giving by giving you only one
heart but don’t worry ‘ there are plenty of hearts
scattered around the course for your piggy to pick up and add to
it’s longevity.  I had 10 hearts at one point and
then around level 15 or 16 I lost them all ‘ due to the added
enemy of renegade rabbits running directly at my piggy and kamikaze
ducks-flying overhead.  Your piggy has to jump over the
rabbits and NOT jump when the ducks pass by.

What I liked:  Randomness of levels.  With some games
if you die on a level and have to repeat it, the level will be exactly
the same and so by repetition the player will learn where all the
objects to be avoided are and can triumph.  Not with PigRace,
when you die on, say, level 16 (because you had to jump over a rabid
rabbit and got smacked in the face by a low flying duck,) and you have
to do the level over, (aargh) the objects, good and bad will not be in
the same places.  It keeps the game level fresh and a player
won’t feel like they’ll never get past some
stagnate set of obstacles that has only one solution.
I also really liked the level-winning screen with it’s
‘hoo-raaah’ and the
‘yeee-ha’s’.  When your piggy
has accumulated a certain number of points during a level you hear,
‘YEE-HA!’ in the background ‘ made me
laugh every time.

What I wish was better:  Little things, not much.
PicasoGames recently uploaded this game and I believe these were just
a couple of things that were overlooked ‘ like it is with all
new games or games in development, just a couple of teeny tiny
incomplete entities.

First, after a certain number of levels completed you are supposed to
get a trophy.  But when that time comes,  the game
goes to a cut-screen and a blank cartoon wooden sign pops up with
absolutely nothing on it, next to the sign is a box to click that says
‘skip’.  Now I’m sure that that
cartoon wooden sign was supposed to show my hard earned trophy, but it
just showed nothing ‘ and I felt strangely like
I’d been somewhat ripped off.  Hey!  I
worked for that trophy!  Let me see it!  Ahh well, I
suppose I won’t be too traumatized to continue to
play.  I’m sure this is something that the creators
of PigRace know about and will fix in later
versions.

Editor’s note: After talking to Alex of PicasoGames, he explained that this is an inter-level ad and not a problem with the game.

Second are just a few grammatical
faux-pas such as using the word ‘to’ when it should
be ‘two’ on some of the informational screens and
small things like that, that give the game a sort-of beta-esque
feel.  But nothing dramatic, no big glitches or programming
problems ‘ nothing that should stop anyone from going and
trying out this cute little game.

But I cannot stress this enough ‘ Make sure your piggy avoids
those racing rabbit, flying duck, mud puddle combos or he’s
in for a killer headache!