My first real video game experience was on an Atari 2600 at a neighbors
house in 1978.  Although I had played some Apple II games, had
a cheap Pong knock-off, and was familiar with the arcade games of the
time, the 2600 was the turning point in my early video game playing
history.  That fateful day, at Carrie’s (the
neighbor girl) house would set me on a path to a career in computers
and games. From minute one, I was hooked. Steve and I must have played
that machine for 6 hours straight  until we finally got the
subtle hints that is was time to go home. The games were good (the best
we had ever played at home), the machine  was shiny with lots
had cool switches on the front, and the controllers were unique and
easy to use. Those controllers, known as the CX40, and would go on to
be loved and loathed by a generation of gamers. The CX40 was the
human-machine interface that kept millions of early games playing all
night long. They were virtually indestructible, easy to use (one
button), and would cramp up your hand like no one’s business.
While the Apple II had a difficult to use analog stick, and the pong
knock off used paddle-like devices, the CX40 was a brilliantly simple,
rugged design that arguably was only equaled (but not bettered) by the
NES game pad.

–
‘ Needless to say, I am hooked. The Atari USB Stick by the Legacy Engineering Group is an absolute MUST for any retro gamer.’ – 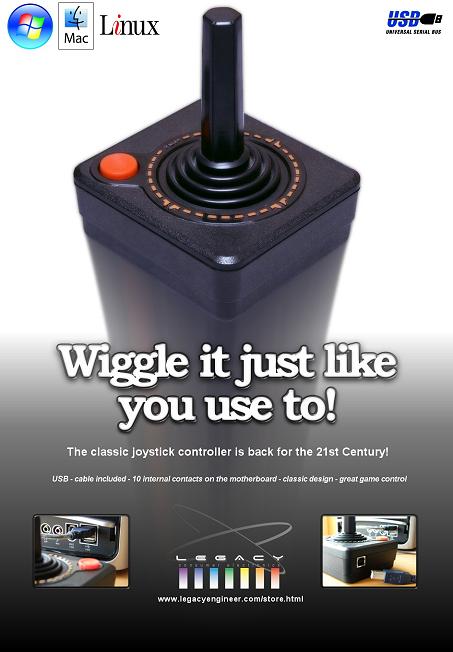 Now, with the help of Legacy
Engineering Group, everyone can
relive those classic gaming moments with a reproduction of the classic
CX40, now in USB form.  For $15.00 (cheaper the more you buy), you can play on a PC, Mac Or Linux machine with the retro collection
or emulator of your choice.

To test the stick, I fired it up in Windows and tried it out across a
number of emulators: Stella (2600), Atari800Win (Atari 800), Steem
(Atari ST), and Mess (7800 and 5200). I found the stick to be exactly
as I remembered the original. The only difference being a USB cable and
the rumored added feature of 10 more button contacts inside that can be
used for arcade cabinet additions.  I wasn’t able to
try this out, and feared opening up the stick (as a kid, we had to open
them up often to put scotch tape between the button and the contact to
jump start a semi broken stick) and broke a number of them doing so.

One of my all time favorite games was Food Fight on the 7800, so I
decided to try it for the first time in years with this USB
Atari CX40 stick.  Anyone who knows the game well will tell you that
success is predicated on being able to maneuver easily in tight spaces
and being able to easily and efficiently  use  the
watermellon unlimited ammo when available. Both of these are very
difficult with game pads and until now I could never get the feel right
when playing with them. With the USB CX40 I had no problems replicating
the old experience with this title. The game was actually fun again,
and I was able to institute all  of my old moves: grabbing a
piece of food at the end of the level as to have ammo when beginning the
next; doing end runs around the corners to get an instant replay, etc.
It was the finest Food Fight experience I had had since boxing up the
non-working 7800 and putting it into the attic. 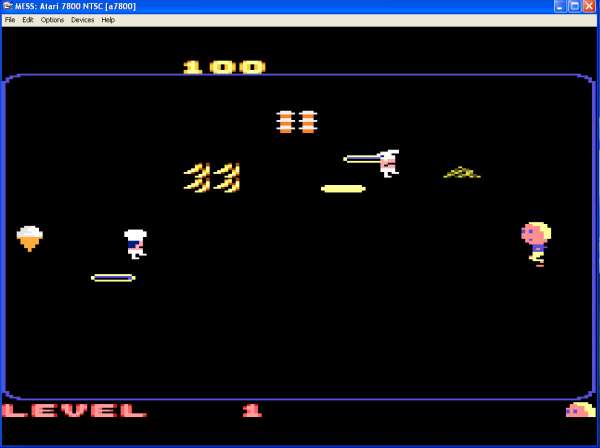 Another favorite game of mine was Ms Pacman. I don’t need to
tell most retro gamers how awful it is to attempt  to
make the quick turns necessary to be a success without a
proper controller. I haven’t played a decent home game of it
since the 7800
days of old because a game pad just doesn’t do the trick.
Guess what, the USB Atari stick was genius at this game also. Gone were
my failed attempts to round a corners and make quick cuts. I was in
retro video game heaven for the fist time in many many years. 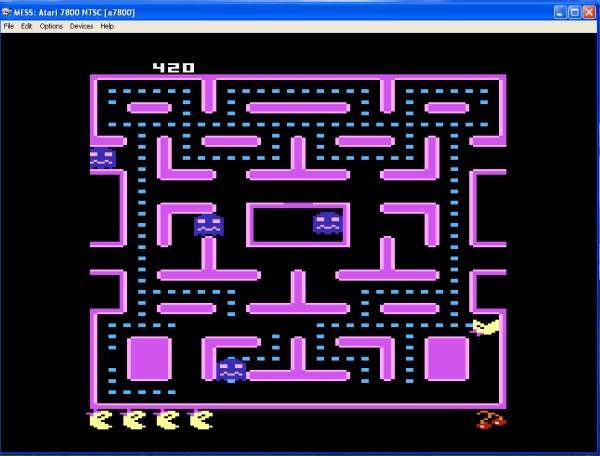 Needless to say, I am hooked. The Atari USB Stick by the Legacy Engineering
Group is an absolute MUST for any retro gamer.

There are some minor problems though, but there are inherent to the
design of the original stick so this reproduction wouldn’t be
authentic without them…blisters and that cramping PAIN.
Play for too long with aging retro hands like mine, and you can feel
the slight damage it is doing to your fingers and hand. But, it’s
nothing permanent, and no worse than what a night of game pad playing
will do to your hands. Plus, it a fooking riot to be playing these
games again with the proper equipment!  It isn’t good
for any 7800 or 5200 games that relied on a second joystick button though, but
then again, there weren’t too many of those any how.

I would have given it 10/10, but I would like to have seen an extra
button or two available without modification so it could be used for
5200, 7800, and NES games.  That’s being picky
though.  Where the button(s) would have been placed you ask? I
don’t know, I’m not peripheral engineer,
but maybe one on the right side as well as the left? Who knows, anyway, it’s a great piece of hardware as is.