Dave Munsie’s incredible title, Retroshoot has been added to the 8bitrocket Retro Arcade Showcase. His first indie Flash game is good enough to be only the 6th game we have ever felt deserved to be given a Gold Medal Hall of Fame Award. Dave’s game is so good in fact, I hazard to call it one of the finest, if not the finest indie retro Flash game created to date.

Dave was an Atari ST game developer in the classic 16-bit era and his obvious master coding skills shine though.  He was nice enough to give us a site locked version, so don’t even try to steal this one and put it up on you own site =) You will have to contact Dave directly and ask for your own site-locked version. Look for an interview with Dave to hit this site next week.

In this highly optimized blast-fest, you take control of an auto firing juggernaut that must do battle with wave after wave of evil foes. Don’t mistake this for a simple Geometry Wars clone, as it is much much more. 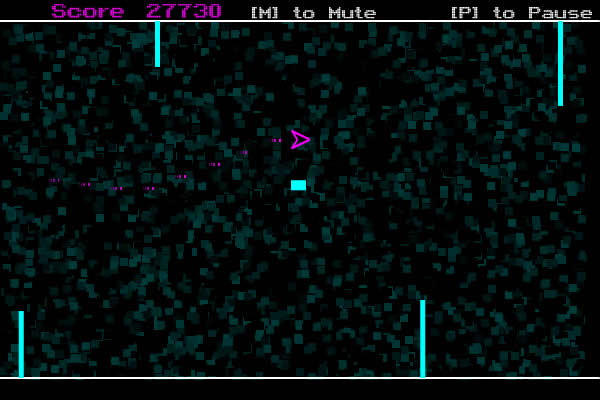 Steer the ship and blast all enemies. Try to get all the powerups to survive the onslaught of invaders. Boss levels are the best ever.

Control: Mouse – auto-fire all the time! Space to Pause and un-pause.

8bitrocket Take: Retroshoot is good enough to be only the 6th game ever inducted into the 8bitrocket  Retro Gold Medal Hall of Fame. It is so good, I hazard to say that is it quite possibly the best retro styled game ever released into the indie Flash community. Everything about this game is pure class and it is a joy to play. Dave Munsie was an vaunted PD Atari ST game programmer and his classic skills shine through in this superb release.