I am in the midst of creating a game of ever expanding scope
called Blaster
Mines. It started out as a relatively simple extension of Mine-X
4K. The initial idea was to make a game similar to Bosconian
and get it done quickly in my spare time. After being absolutely
floored by the quality of Dave
Munsie’s RetroShoot, I have decided to spend more time crafting
Blaster Mines into what will eventually be Retro
Blaster 2. This will be a lot of work, so in the mean time I am
doing experiments with smaller games to see what might work well in s
360 degree scrolling blaster. That’s where Solar Fortress comes in.
It is my attempt to re-make a retro classic (Star
Castle) in as little time as possible, but still retain a
modicum of quality and try to modernize the original in at least one
way. What I learn from this game I will add to Blaster Mines in some
capacity. 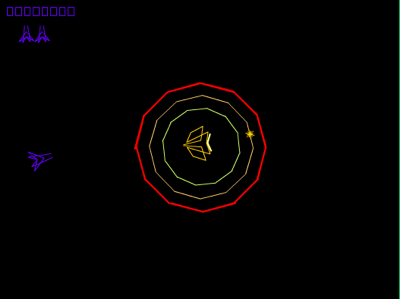 So, it’s obvious that a Flash version of this game already exists,
so I am not being highly original by creating my own version, but I
hope to differentiate mine to some degree. In any case, the purpose of this
exercise is to investigate, learn, and also to fill out the
8bitrocket
catalog with more retro titles.

I don’t steal graphics, so I have to use my limited skills and
experience (drawing space ships in Math books in 4th
grade) to craft up something that I hope people will find enjoyable
to play, and at least pleasant to look at. Having said that, I don’t
plan on any of these mini-retro classic updates to take more tan
20-30 hours to complete so I can’t linger on the visuals too long.

My first 4 hours on Solar Fortress were spent instigating a little
into Star Castle, the game I plan to re-make. Star Castle was one of
the first games I was addicted to as a kid. In the early 80’s, there
was a Star Castle machine near our home in a Safeway
grocery (where a Coffee Bean and Tea Leaf sits now in Manhattan
Beach California). Steve, Eric Barth and I would play that game for
hours (or with as many quarters as we could beg out of our parents).
I think I probably played the game 100 times before I was able to
destroy the castle the first time. The shriek of joy that from the
three little boys behind that strange video game must have scared
most of the Reagan era frugal shoppers. I think I remember parents
hiding the eyes of their children as they walked by the three little
video game obsessed weirdos.

My investigation started by taking a screen capture of a Flash
version of Star Castle. I measured the size of the fist 45 degree
line in the outer ring and it fit a 32×32 tile (how convenient). I
actually was not planning to use tiles for this game, but I because I
eventually will use BitmapData collision detection, I needed to start
on familiar ground. I then fired up Flash Develop and began a fresh
new empty Main class. I created a shape and drew a red line 4 pixels
wide from the bottom corner (0,32) to the top corner (32,0). I drew
that into my 32×32 BitmapData, added it to a Bitmap. Then I began
playing with the angles of rotation to see how the lines in the
castle wall actually fit together. It turns out that each of the 12
lines is rotated 30 degrees more than the one to its left. I whipped
up some code to loop though and rotate 12 lines for the outer ring. I
then added those to a Sprite (and to an array for easy looping). I
moved that sprite to -1/2 width x, -1/2 height y and then added it to
a holder Sprite. The holder is rotated clock-wise on each frame tick
to provide the Star Castle ‘ like wall rotation. I had always
wondered how this was done. I think it must have been much more
difficult with the Cinematronics
hardware in the 80’s, but AS3 makes it pretty easy.

For the inner yellow and green wall rings, I repeated the same
procedure but made each segments 24×24 in the yellow wall and 16×16
in the green wall. My first test of running the code had me stuck in
nostalgia right away.

The final of these 4 hours was spent plotting the player ship in a
32×32 png and then translating that plot to a code based vector line
drawing. This took much longer than I thought it would, but I am
satisfied with the results (so far).

(My
ship magnified 2x). It looks similar to the Star Castle ship, but not
exact. The remaining game characters (plus new ones I put in) not
resemble to original as much as this one does (at least I hope). I
wish I had some of my 4th grade Math texts to use as a
reference.

Here is a non-interactive swf of the current hour 4 build.