Yesterday I was at a “Save The Teachers” rummage sale in California (they are firing teachers right and left here because our state budget is out of whack and parents are bit concerned about 50 kid classrooms with no aids, librarians, PE, music, etc).

Anyway, this rummage sale was interesting because it was basically a bunch of “rich” people’s stuff that they dug out of their spare rooms.  However, the prices were not to the same scale.  Because of this I was looking for old video game collectibles that had either been generously given (unlikely) or donated by mistake or by mothers/wives/grandparents who wanted to “clear the room of old junk” while their respective husbands/wives/grandkids were not watching.

Anyway, things had been picked-over fairly well and I almost gave-up when I saw this: 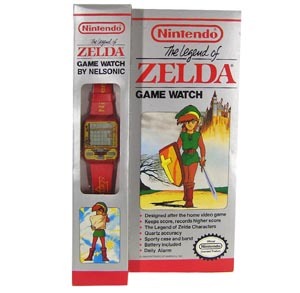 This was sitting with a Super Mario Bros. Game Watch as well.  Both were dated 1989.  I did not know anything about these but they were priced at $1.00 each so I bought them anyway.

It turns out, after some research, that were from a set of Game Watches made by Nelsonic in the late 1980’s.  They are not really common items.  The lowest price I saw for them
was $40.00 each.

I felt bad for a few minutes after I found this out.  The people who ran the sale did not know that these things might be worth something, and it was possible that the guy who “sold” them, did not really want them sold.   No matter though, they have found a good video game collecting home.  You can be sure I’ll take care of them.