I’ve been reading Benjamin Nugent’s American Nerd lately.  One of the aspects of nerdom that he points out is the need for nerds to “coin phrases”.  Obviously, we at 8bitrocket.com have tried our share of this.  From “Midcore Gamer” (between “casual” and “hardcore”) to “vink” (virtual ink) we have attempted to put our stamp on language and pop culture.   Today, we try once more with “Wore The Leather Jacket”, the opposite of “Jump The Shark”.

The phrase “Jump The Shark” is so over-used these days that I’ve heard people start using the phrase “Moved The Island” (a reference to “Lost” I suppose) just to get away from it. In fact, it’s been used so much that there are people who really don’t even know what “Jump The Shark” is in reference to in the first place, they just use it as an every day phrase. Just to clarify, “Jump The Shark” is a reference to the TV show Happy Days. In the 5th season in 1977, there was an episode in which Fonzie attempted to literally “jump a shark” on water skis while on vacation in California. It was a watershed moment in television history. Not because the idea of “jumping a shark” was “cool”, but because the idea of the character Fonzie on water skis in California jumping a shark was so ridiculous and so far removed from the midwestern 50’s roots of of the show, that it pretty much rendered the rest of the season and the next few years left in the series, patently ridiculous.

However, if the phrase “Jump The Shark” was created because a “cool” show suddenly became “uncool”, then it’s logical to think that the same show must have had a moment when it went from regular TV show” to “coolest thing on the air”. That moment, in fact, happened in the first season of Happy Days. In the first few episodes of the show, the character of Fonzie was not important. He was simply a bit-player hooligan who wore a tan cloth gang jacket and caused Ritchie Cunningham and his friends loads of trouble. However, by the 4th episode, Fonzie arrived sporting a “cool” leather jacket riding his motorcycle. Legend has it, that the network executives agreed to the let the Fonzie character wear a leather jacket only when he was near his motorcycle, otherwise he would look like street hooligan. However, Fonzie became so popular that the writers added him, his leather jacket, and his motorcyle to as many scenes as possible, just to get around this limitation. Soon, he became the most popular character on TV, and a 70’s TV icon was born. For this reason, I propose that the “negative” of “Jump The Shark” (which would in fact be a “positive”) should be the phrase “Wore The Leather Jacket”. This phrase should refer to when something suddenly, for whatever reason, became an important part of our pop-culture landscape.

To start off this idea, I have put together a list of when I believe classic video game systems became sought-after items…in other words, when Golden Age Video Games “Wore The Leather Jacket.” Just to be complete (nerds are completists too), I’ve also added when I think they “Jumped The Shark”.

Sure, Pong was the first successful coin-op, and Space Invaders sealed the deal, but the “cool” of video games did not arrive until Tempest. Tempest had a sleekly designed cabinet, innovative “paddle” controller, and was one of the most intense games ever made. While game geeks were still shooting one-shot at a time with Space Invaders and dinking space rocks in Asteroids, the cool (and dangerous) kids were dropping quarters (and possibly a few acid hits) and freaking out to the blistering experience that was Atari’s Tempest.

With advent of arcade cabinets that could be re-used for multiple game (i.e the SNK Neo-Geo MVS), the days of the cool, custom arcade game were lost forever. The games starting looking more and more alike, and players flooded to home consoles that offered better game-play and (eventually) better visuals than arcades could ever hope to provide.

Wore The Leather Jacket: “Have You Played Atari” Today commercials

Sure Space Invaders put the Atari 2600 on the map, but the jingle “Have You Played Atari today” has been burned into the consciousness of Atari fans and non-fans alike since it first appeared on the airwaves more than 27 years ago. “Have I played Atari Today?” Yes, and I want to play again.

By mid-1983 the Atari 2600 was struggling in a crowded video game marketplace. Atari lowered the price of their machine, and started giving away stuff for free (including the once vaunted Pac-Man cartridge). While kids in the 80’s might not have been privy to the Wall Street antics of Warner and Atari back in December 1982, every kid knew what price cuts and free crappy software meant: all the allowance money you spent on 2600 games should have been saved-up for a Colecovision (see below).

Ultima, released in 1980, was the first of the great home computer based RPG games. A few games proceeded this one, but nothing had the impact of Ultima. The game was written in BASIC for the Apple II by Richard Garriott, and it made the dream of deep role playing games on a personal computer a reality. 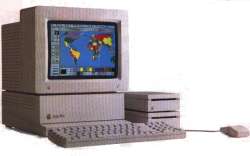 In 1986 Apple decided to continue the Apple II line with the GS. The GS was a 16-bit computer fully backward with the Apple II that in some ways, superior to the Macintosh (full-color graphics), but it never proved to be a popular item. With the new Amiga and Atari ST 16/32 bit Motorola based computers on the market, the GS seemed like too little too late. While extremely popular with Apple II fans, the GS was buried as Apple pushed the higher-priced and forward looking Macintosh.

Atari’s space combat game, released in 1980 was the most impressive computer game of it’s time. In computer hobbyist circles, the combination of 3D graphics (scaled), combat strategy and arcade action proved unstoppable. The Doug Neubauer developed game became one of the most talked about pieces of computer software in the Silicon Valley and even made it’s way outside of computer circles to mainstream publications. Star Raiders is seen as one of the main reasons the Atari 800 became the most popular gaming computer from 1981-1983.

The Atari 1200 XL was the Atari home Computer Division’s biggest mistake. In 1982, with competition mounting from Commodore via the bargain priced Vic-20, and the upcoming C-64, Atari decided to announce this “next generation” machine. However, by the time it was released in early 1983, it showed it self as buggy,expensive albatross with backwards compatibility problems. The release of 1200 XL actually prompted hobbyists to buy more Atari 800 machines (the 1200 XL was supposed to be it’s replacement)  as fans feared this was the future of their beloved Atari computers. This misstep opened the door for Commodore to take a lead in the home computer world with the C-64. Atari quickly redesigned the line with the Atari 800 XL (plus 600xl and unreleased 1400xl and 1450xld), but manufacturing issues and new leadership under CEO James Morgan delayed the released until late 1983, allowing commodore to dominate Christmas that year and never look back.

Mattel tried to make the Atari 2600 look lame with these commercials that compared the two systems’ sports games. It worked. The VCS was never known for it’s great sports titles, but after Mattel showed their games trouncing Atari’s in a direct comparison, they became king of the sports titles. They were also the first company to license actual sports league names like MLB and NFL.

Mattel decided to go into the computer business in 1983 with the Aquarius, and it helped lead to the downfall of the whole Mattel Electronics division. If people did not want to buy a great computer from a perceived “toy” company (i.e Atari and the 800), why would they want to buy a cheap looking, under-powered (it could not even recreate Intellivision titles) and ill-designed computer from an ACTUAL toy company. answer: they didn’t.

When Colecovision was released in 1982, it was a huge hit, mostly because it came packaged with the biggest arcade game of the time, Donkey Kong. While Atari continued to remake (but not revamp) the same old arcade games for their systems and computers (Asteroids, Centipede, Space Invaders), Coleco licensed tons of interesting, but lesser-known arcade games and they were a hit with the arcade gamer crowd. Games like Slither, Mr. Do, and Venture caught the imagination of video gamers who were bored with the same old, same old. Some pundits even count the release of the Colecovision as the first big crack in the foundation that led to downfall of the arcade business. Why? Because near arcade quality games were suddenly available at home. 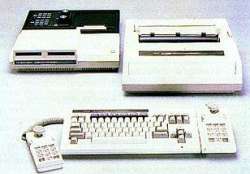 Like many of the other entities on this list, the Colecovision jumped the shark with a piece of ill-advised hardware: the Adam computer. However, this time it was not the power of the hardware (a Z-80A with 32 hardware sprites and 16K of memory), but the price and timing. The Adam cost over $500 (with a disk drive, printer, and other goodies) at a time when a basic C-64 cost $200. Also, like the Aquarius, the machine had an identity problem. It was compatible with some Colecovision software, but it was not really an upgrade, and it did not seem like a serious computer. The failure of the Adam helped close the door on the most promising golden age game system from an American company.

Finally, this edition ends with The Vectrex. When it was released, the Vectrex with it’s vector screen and phenomenal Asteroids variant, Minestorm was quite possibly the best video game system ever made at the time. The unique feel of the controller, stereo sound, and crisp arcade-like graphics made for a very compelling package.

The main problem with the Vectrex was that the game in the system ROM, Minestorm, was also the best game ever made for it. While other games were quite good (i.e Star Castle and Armor Attack), they also showed just how thin the game-play was for these early arcade games. Without the need to drop quarters in a machine, players could reach a level of impossible difficulty in a matter of hours. Still, other games just did not translate well (i.e. sports and racing games). This left the few other existing great vector games as source material. However most of those were by Atari, and licenses for those were never acquired. The only thing close was, again Minestorm, which unfortunately, was also the pack-in.

Well, that’s it for this installment.  There are tons more Golden Age “Wore The Leather Jocket” moments to cover, and we’ll visit some of those next time.