I was trolling message boards and portals this morning because of my inherent need to procrastinate rather than work on the three games I have going at once. On the Mochi boards I found a link to a  YouTube video of this game and decided to check it out on New Grounds.

Press Space To Win is a tongue in cheek retro flash “game” where the objective is to finish the adventure and save the Kingdom from Peril. The 8-bit visuals are well done and the music is incredible throughout the game (Midi and Samples, not chip tunes). 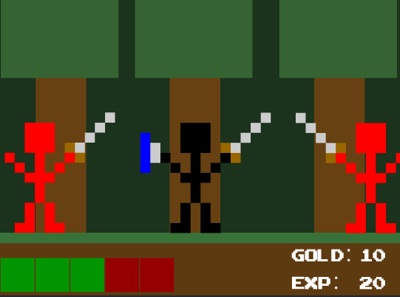 Most of the game is played by simply hitting the Space Bar. At its core is a nicely put together Flash animation that makes fun of both the current trend of “dumbifying” Flash games down to a single button press, and the ludicrous nature of most RPG quest games. But thrown into the mix, there are several Dragon’s Lair type sequences where you must press the space bar at the right time to move on.

Honestly though, I can’t tell if any of these interactions actually do much in the game, but it was interesting to see where the author wanted to take the player. It certainly is worth a look at least for the creativity, patience and attention to detail that Rhete (New Grounds user) put in.  Game play-wise it is lacking, but that’s the point, isn’t it? Nice work!