I know you are going to play the world tiniest violin for me, but reviewing games is hard. No matter how much I try, I’ll never be able to grade every Mochi game, as there are a flood of new ones every day. There are not as many featured ones, but what’s the fun of only reviewing games that Mochi has already told me are good? Also, I have had a really bad neck and shoulder pain problem this week (not caused by dress up games I hope), so today I need to take the typing, cutting, and pasting easy. No matter what I try, it is getting worse. So, this one will be a little more abbreviated than usual as I wait for a call back from the pain specialist.

Some decent games on tap for today. I had to reach back in time a few days to get a game I wanted to feature. I skipped a whole bunch of me-too clones and dress sup games today. A few still slipped by though.

8bitrocket Highlight Game(s) Of The day: Bom up 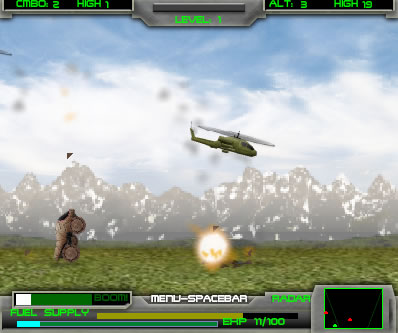 Why is this the featured game: This is the sequel to one of the best chain-reaction games of all time. In this simple, but incredibly fun contest, you pilot your talk across the ground trying to get hit by enemy ordinance. When you are hit, you are propelled into the sky end over end and you must attempt to hit the enemy and cause chain reactions with damage multipliers.
Description: A traditional Flash game done with outstanding style.
First Impression: I played the original a while back, but the Anniversary Edition is just as fun or better. It shows what a class developer can do to make a tried and true Flash Game concept fresh and fun.
Rating: A.

Description: A traditional FRASH GAME where you jump up and try to keep going higher by hitting new objects in the sky that propel you further up the screen.
First Impression: Very simple game play, but after 100’s of dress up, Zuma, and TD clones, this is refreshing (if not derivative in itself).
Grade: B. A solid effort.

8bitrocket Capsule Reviews: (sorted by grade for her pleasure).

Beach Soccer: A very commendable attempt at creating footie action in Flash. This is going to seem like an 80’s 16-bit review because that’s what this game feels like. The characters are large and detailed, and the computer AI is very good. Everything moves at slow pace, and the controls are a little sluggish. BUT, for footie action in a browser, it is probably the best looking game I have seen. Grade B+.

Red Sky 2: A full RTS in Flash. This one is a little difficult for me to figure out how to play and it ramps up in difficulty pretty quickly. The interface needs some work. What is with all the games needing strange control schemes today? I guess I’m just old. A lot of time was out into this one, but it needs a tutorial mode. Grade B.

The Labyrinth Phase 1: Hmm, I think they were going for portal here. You click the “wheel” in each illustrated room to turn the room and reveal a door to go through. The game play is simple. Pretty original, not action packed, but not bad either. Grade B-.

Brick Buster: Look, a breakout clone shouldn’t be this difficult to figure out how to play. It has some unique, but also some aggravating features- but there seems to be a lot to do and interesting ideas. It is all marred by strange controls, and a rather bla looking interface (with some  UI controls  partially off the side of the screen). Grade C+.

Bikini Dress up: I was going to ignore all dress up games today, and probably should have, The name gave me some hope, but all was lost when it turned out to be a “colorforms” dress up. That is the worst kind as you can place the clothes anywhere – why am I even reviewing this? For dress up fans only (that means you, Ace SV). Grade C-.