So, I take one day off (Sunday) and the “fit hits the shan”. There are so many truck loads of new Mochi games every day, and I have no idea how portal owners keep up (if they do at all). I know I sure can’t. I have sifted through them all and picked many to review. Let’s hope I didn’t miss any gems. There were some great games today and some absolute shite. I was able to hit 26 games but still missed a few from the weekend. I will try to catch those tomorrow. 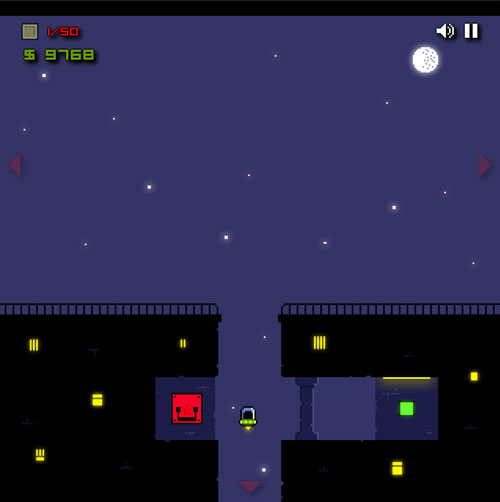 Why is this the featured game:  SWEET! Is all I have to say about this one. It is Retro KICK ASS + Modern Zar Jaz written all over it! You pilot a small “ninja craft” with a simple Shuriken as your main weapon. It is a little like OIDS, Caverns Of Mars, and Gamma Bros all mixed into a slam dunk, grand slam, hat trick, penalty into the side net winner!
Description: Take your UFO through the caverns, use your Shuriken to combat the baddies and collect colored squares (it’s better than it sounds)
First Impression: I love it. This is a really fun retro style game with modern stylings.
Grade A.

Description: Fight off bunnies, Zombies and other baddies in this stylized rhythm beat-em up.
First Impression: It really is more like Guitar Hero (and its ilk) than it is an action game. Press one of the arrows keys that corresponds to the enemy you are facing. If you react quick enough, you will dispatch the current enemy. Great fun, very polished. A sure winner.
Grade: Grade A.

Description: Another very well made and fun first person (well, actually third, behind the car) Racer.
First Impression: This one seems like a good old Amiga game. Mochi missed a good game here in that they did not feature it.
Grade: Grade A.

Turbo Trucks: A First Person (behind car) 3D Truck Racing Game. It looks fantastic, but the sounds and the truck sliding instead of steering properly leave a little to be desired. Don’t let that detract from a sure portal winner. Grade A.

Mario Ghost House: This seems like a pretty well made re-make of an SNES classic. The problem is the inevitable cease and desist letters from the big N. It’s awesome is all ways it can be, but I have to down grade it for IP problems.
Grade as a game and for portals with no conscious: A.
Grade for use on portals who care about IP issues: C.

Bio Bots: A very well done “Path Defense” or “Tower Defense” style game concerning garbage and bio eating bots. It has an original theme and should do well on your portal, but I have played far too many of these lately. Grade B+.

Planet Basher 2: A good looking, and relatively simple game of shooting stars with a cannon and bashing planets. There is some good humor and you can win stickers! Nicely done. The music is especially well crafted. Grade B+

Semantic Tank Antics: Wow, what an interesting word game. It is very complicated, but it involves a tank, quotations and hang-man, and a scrolling world. Quality throughout, but I had trouble with what exactly I was supposed to do. I won’t let my ineptness tarnish a very well crafted product. Grade B+.

Jump up: A fun, traditional Flash game based on speed and trajectories of a stick man. It is a simple, well made and pretty damn fun game. Grade B.

Fall Down: Keep a beach ball on the platforms as you scroll down the screen. Very entertaining with some cool music, sweet FX and nice combo possibilities. Grade B.

Squares Of Doom Addition: Make sure the numbers on the 9 boxes (3×3 grid) create rows and columns that add up to the amounts outside the rows and columns. I’m making it sound more convoluted than it is. Not a bad little puzzle game. There is a lot of competition out there though. Grade C+.

Space Smasher: A pretty good Arkanoid clone. I like a lot of the intro screens and some of the design, but the game play and some of the controls were a little confusing. There are a lot of these out there, so to be given a high grade it has to be above the pack. Grade C+.

Space Pong: Pretty much pong in space. Nothing fancy, but you can play two people at the same keyboard. No sounds and pretty simple, bla visuals. I love a classic though. Grade C-.

Apple Snake: Wow, a very cool Snake-like game with many added elements. It moves very smoothly, and includes enemy and shooting! Sweet, If it had sound it would be the best snake game ever. Grade B.

Dance Dance Evolution: A rhythm game made by people with a pretty good sense of humor. The game really is not very fun, and it has a few bugs (NAN showing up in the % field). For a tech demo it is OK, but as a game, it needs major work. Grade D.

The 3, 5 Minute Shooter: A Game designed to entertain you during commercial breaks. Honestly, it isn’t 1/2 bad. It isn’t great, but for the purpose, it will suffice. Grade C.

The Worlds Hardest Laser Game: Make it to the key without getting hit by the lasers. Not bad, but pretty ordinary. Grade D.

Tank’d in a room: Geometry Wars with tanks. Honestly, it doesn’t look like much (ok it looks decent), but it is pretty fooking filled with fun shooting action. Give this one a chance. Grade: B.

Square Bounce: Keep your stick man from being pummeled by squares flying from the side of the screen. Shows promise as a tech demo, but as a game it needs more. Grade D.

Haven The Hospital: A well done point and click adventure through a mental hospital. The interface is very simple and clever (a cardboard box for your inventory). I’m sure there is an audience out there for a game like this. Grade B.

Laser Dodge 2: Dodge the lasers coming down the screen. Simple, classic, and boring. The Main Menu button on the game over screen does not work. Grade D.

Time Chaser: A very simple, but ultimately very entertaining game of collecting the rings and avoiding the stars. Simple and almost brilliant with some collision detection issues that make is a little more difficult that it should be. Grade B.

Swarm: I had high hopes for this one, but what the fuck? I think swarm must have some technical problems because it plays like molasses on all of my browsers. I also downloaded the swf and it still didn’t play well either. It just hangs up and I die. It needs major improvements to become an F. Grade F-.

Eddie the Teddie and his fear of Garden Gnomes: Cute name, bad game. Collect diamonds and watch out for patrolling (moving right to left) gnomes. Some nice little animations, but as a game it needs work. Grade C-.

Adver Inferno:A little game with A LOT of advertisements. The animation is nice (it reminds me of Making Fiends), but as a game, its lacking something. Grade C.