My hat’s off to the Mochi staff once again for always doing a great job of selecting the Featured games. I do (once in a while) find games that I think should have been featured that the over-worked Mochi staff might have missed, but normally they do a spotless job. Today is no different as both the 8bitrocket Game of the day and the single 8bitrocket Featured Game are both Mochi Featured games also. There are some fun non-Mochi featured games to take a look at and even one dress up game that got me to take a look, but overall the game selection was a little lackluster depth-wise.

8bitrocket Highlight Game(s) Of The day: Hop The Gap 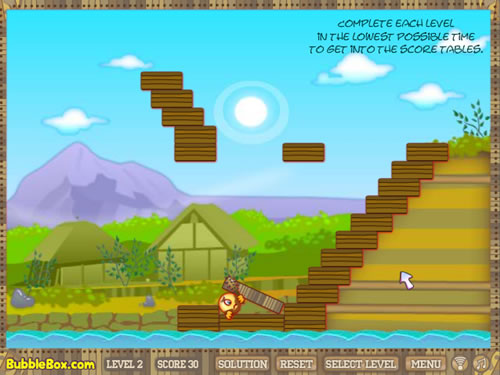 Why is this the featured game: This is a very well made, quality puzzle title that would not be out of place in the PopCap or Big Fish catalogs.
Description: A lemmings style physics based puzzle game: Eliminate all of the Roly-Polys by solving the puzzles.
First Impression: This is a cool little game with all the polish necessary to make a big splash on the portals. You need to drown the poor Rollys, but it’s a fun blast trying. It automatically remembers the level you left off..
Grade: A.

Description: Help the stick figure to jump the various gaps in this jaunty little speed/trajectory style puzzle game.
First Impression:: Everything is quality and the music works well (i’m still bobbing my head).
Grade: B+

Alkirian 2: An illustrated adventure style (point and click with inventory game). There aren’t many instructions, but it looks pretty good and I figured out how to move some rocks on the first screen. Overall the quality is high, but not really my type of game. My sister would love it though and that is a compliment to the developer because she is the prime target for games such as these. Grade B+

Pongo: A simple breakout style game with a green color scheme. I’m trying to figure out if I’m missing something because one of the tags is “Thunder”. No thunder here, but a competently programmed little retro style contest. Grade C+.

BombTasm: Like Pongo, above, this is a competently coded little “explode the bomb” chain reaction game. The music is nice, but there isn’t anything really special to move it ahead of the pack. It should be fun for a few minutes though. Grade C+.

Monkey Madness: A collection of 3 classic mini games – Wack-a-Monkey, Monkey Concentration, and Monkey Quick Draw. The presentation quality is above average, but the games are pretty limited. I could very well see this re-skinned for simple advergames or even inside ads. Kids might like well drawn creatures and fun sounds. Grade C.

Funtoxication: This is a shell for Monkey Madness with a bonus Blood Alcohol calculator. There really is no separate game here. Grade N/A.

Crazy Rider: A very polished, but ultimately lacking race contest. This solid game looks great, with an overall quality presentation, but the racing action leaves a little to be desired. I don’t mind the scaled, fake road, but the player’s car floats too much and slides across the screen instead of steering properly. That being said, it’s still above average and a nice effort. I think it might do well on portals. Grade B.

Alpha-Soup: A word is displayed at the bottom of the screen and your task is to find the letters to the word in order. The letters are splashed in-mass, floating on the game screen and you must pick out the correct ones. This isn’t a bad little word game, but it is pretty average at best. Grade C.

World Reaction: A game that tests your reaction time against the world. Actually, this is quite interesting and unique. There isn’t a lot of game here, but the attempt to do something unique is appreciated in the sea of dress up games and bland retro re-makes. Grade B-.

Meagan Fox Makeover: Now, if there is one person who doesn’t need a make over, it’s Meagan Fox. But, one way to get me to click and play your dress up game is to give me that chance anyway. The character doesn’t look too much like the over-exposed starlet, but it’s nice to see that they didn’t steal any publicity shots to make their game. The make up and hair portions are well done, but the clothes is “Colorforms” – meaning that you can just slap clothes anywhere on the screen. Not a bad attempt though, and it got me to click. Grade C.