When people talk about “old school” role playing games these days, they are usually referring to Final Fantasy or Dragonquest or some other JRPG released near the end of the 80’s. Those are good games mind you, but hardly old school. To me, “old school” RPGs are nothing of the sort. They are Ultima, Wizardry, Temple Of Apshai, Rogue, Ali Baba And The 40 Thieves, and many other games that have mostly been forgotten since the NES dominated video games after 1986. 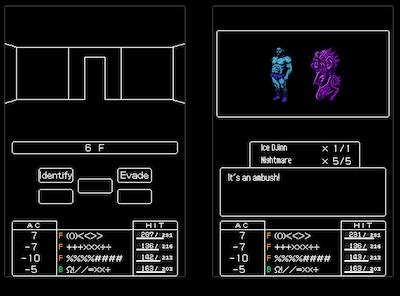 Most kids from the 90’s don’t even know that RPGs started on mainframe computers and classic 8-bit computers systems like the Apple II and Atari 800. They don’t even realize that Final Fantasy I is an almost exact duplicate of Ultima from many years before. Damn whippersnappers.

Well, here comes The Dark Spire for the Nintendo DS (released by Atlus earlier this year), and one would hope that it might help change a few minds. This is a brand-new game in the style of the earliest computer games. The Dark Spire’s obvious inspiration is the first Wizardry title from Sir-Tech for the Apple II in 1980. While there are some obvious differences, The The Dark Spire has the same in-town/visit single giant dungeon structure of Wizardry, as well as a reliance on text, wire frame dungeons and serviceable bit-mapped monsters to fight (in turn-based battles). There is a “modern” option that upgrades the look of the dungeons and monsters, but after trying for a couple hours, I went right back to the “classic” version. You see, this game is all about stats. They could have named it “Stat-o-Matic RPG” and it would not have been far from the truth. You must keep track of almost everything about your characters: from the weapons they are allowed to use, to the armor they can wear. For instance when you buy a weapon little symbols will tell you which players can use it, but you are allowed to equip it on any character…it just won’t do anything. Similarly, your characters will gain experience after winning battles, but you do not gain levels automatically. You must return to the guild in town and spend your experience on your own. While this might sound restrictive, it actually allows you to create pretty much any character you would like. The four major classes (warrior/mage/thief/priest) can be had by any character, and you can advance in one or any class depending on how you spent your experience. You can also spend your experience on skills instead of advancing levels. The choice is yours.

The titular “The Dark Spire” is one giant dungeon with a “foozle” at the bottom who you must defeat. Traversing the dungeon is linear experience where you are rewarded for grinding as much as possible before trying to “clear-out” each section. However “grinding” might not be the proper word. It’s more of “grind and run” (at least in the early stages), where you pop-in, fight a couple battles, and run out, savoring the small rewards and advances of every minute you play. Battles are both random, and set-pieces for particular areas. All choices are made with text menus, and the results are also spit out as text, while the graphics are used really as reference only. The real game is played with text menus, text stats,and textual descriptions of everything. In fact, in a true shout-out to the 8K-48K games of old, some descriptions of things must be read from the instruction manual (see Temple Of Apshai). Mage spells, for instance, are named in such an arcane manner that the instruction book is essential so you can tell what spell you are learning. While this might seem like more work than it is worth, I found the game very refreshing. Most of the recent DS RPGs I’ve played have been a bit on autopilot. I’m told where to go, what to do, and must have certain characters with certain skills and levels before anything interesting will happen. Leveling in those games is so automatic, as to be a non-event. In fact, in those RPGs leveling becomes the point of the whole exercise. You need the proper number of levels to defeat on big bad guy before you take-on the next. End of story. While a game like The Dark Spire has similar elements, getting there is quite a different experience. You must carefully plan out how to use your experience, how to mix your party and skills, and how to spend your limited cash. It’s not a perfect system by any means, but it’s certainly not inferior to any of the the watered-down RPGs styles that have appeared in the 30 years since this game’s inspiration was first released.

The problem with The Dark Spire is that while game is so well done and true to it’s old school roots, it won’t appeal to 90’s gamers enough to get them to even pick-it-up. To be honest, this game is even old-school for me. I started playing microcomputer RPG games in 1983. By then the games had made some major advances in graphics and sound, animation and game-play. I think the irony with The Dark Spire is that the designers tried very hard to make a game as close to an original 8-bit computer RPG as possible by making the interface and up-front effects as simple as possible. However, the original designers of these games did the exact opposite. They PUSHED the languages (BASIC, then later compiled languages ) the hardware platforms, memory, disk-space, sound chips etc. in every way to make more and more immersive adventures. Before first-person shooters, it was RPG games (in part) that pushed computer game enthusiasts to buy new and more powerful computers. Game designers put in small special effects using the sound and graphics capabilities available to them to make the games as pleasing as they could muster. These things were not a substitute for game-play, but they did help enhance it. The Dark Spire on the other hand almost revels in an era that only existed for a very short time. Anything that does not add to the core game-play seems purposely removed. While I really like the game, I’d like to see the same treatment given to game styles that advanced the genre even further: Ultima III, Phantasie I, Temple Of Apshai, Wizard’s Crown, Alternate Reality , Bard’s Tale and even later games like Dungeon Master, Might And Magic and Megatraveller would all shine if given the same treatment. Still, The Dark Spire is a solid starting point. Older gamers who are not adverse to reading text and who get excited by small and measured character advances instead of huge event-based character coronations should really dig this game. The Dark Spire is a game the begs to be played, but it will not play you. If you think have the guts to play a game like that, you need to try it.

How does this game relate to the subject of 8bitrocket.com? Flash game developers could learn a lot from the implementation of The Dark Spire. The game relies less on graphics, and more on a very solid internal game engine that models old school pen and paper RPGs. The basic set-up with a single town and single dungeon may be simple, but it screams “addiction”. It’s the type of game someone could play for a few minutes or hours everyday, and keep coming back for their fix. The ability to save anywhere in the dungeon helps drive this home. A game like this, with a simple up front ad embed, and then some possible micro transactions for upgrades (or another ad when you enter the town or dungeon), to me, might be the perfect Flash game project. While, a little less text and a few more graphical flourishes would be a good idea, but they should not take away from the simple role-playing goodness to be had from a game in this style. Flash game developers need to find a genre that will get people to keep playing their game more than once. The Dark Spire should be studied as inspiration.