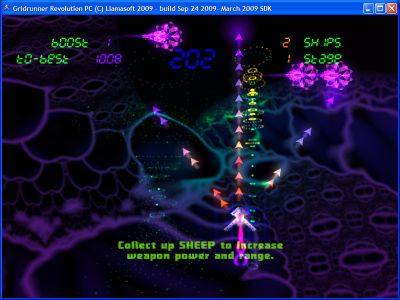 If 8bitrocket.com had it’s very own “Mt. Rushmore” containing the faces of four video games designer/developers who have influenced us the most they would be:

The last one, Jeff Minter also happens to be one of the chief developers of Grid Runner Revolution, the modern update (27years in the making) of the 1982 Llamasoft game Grid Runner just released for the PC and available at the Llamasoft Web Site. Minter jumped back into the modern era of video game after releasing Space Giraffe for the PC and Xbox Live Arcade a couple years ago. Unfortunately for Minter, the reaction to Space Giraffe was not what he expected. While Minter expected to find on Xbox Live, a sophisticated gaming audience that would appreciate his modern retelling of Tempest via Space Giraffe, what he found was quite different. The masses must have been too busy filming themselves naked with playing Uno to realize what a gem they missed in Space Giraffe, but missed it they did. They missed it so much that Minter vowed to quit making games altogether. 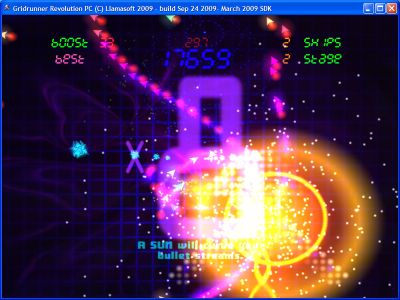 It’s fortunate then. that Minter did not quit, but instead went back to the drawing board to create a modern take on one of his first games. Grid Runner has a long history that we don’t have the space to relate here (and thankfully, we don’t have to because Llamasoft has done this already). We here at 8bitrocket.com played the original game on the Atari 8-bit back in the 80’s, and we loved every minute of it. In fact, it inspired us to follow the rest of the Llamasoft catalogue, and to read Jeff Minter’s columns in the back of ST Action magazine. The original game was a cross between a standard shooter, Centipede, and the coin-op Targ. The basic idea was that the player had to destroy all the bad guys by traveling around a grid populated by lasers and all sorts of other nasty things. It was a very unique and very successful game. 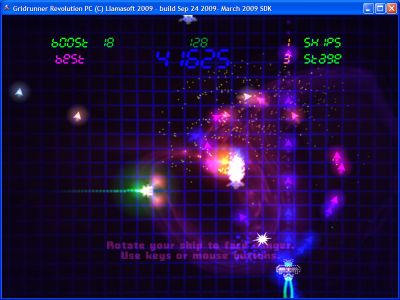 Grid Runner Revolution is less a sequel to the original, and more like a Minter patented acid-trip audio visualizer crossed with top-down version of Space Giraffe all played on an Atari color-vector monitor. The games needs to be played to be fully understood, but we’ll try to get the point across with our words and static images as best we can. There are 200 levels, and on each one you must blast everything in sight and save the sheep that fall from the top of the screen. You ships fires automatically, the mouse moves you around and you use the buttons (there are other control schemes as well) to rotate your ship right and left. Everything blows up really good with seemingly infinite particle effects, while dozens of simultaneous objects move, glow, and pulsate like the best vector games of old. 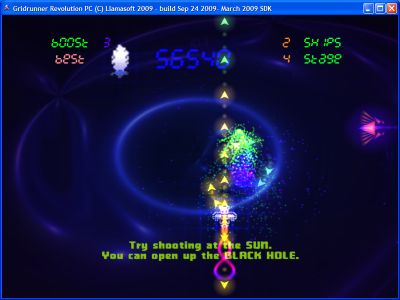 For pure retro enjoyment, this game really delivers the goods. It’s easy to get into, keeps your attention, and inspires you for “one for game”. There is not much else you can ask from an arcade game. Honestly, there is so much going on in Grid Runner Revolution, it’s surprising to see just how much work went into the game. In some places, the game is so beautiful, and so pleasingly retro at the same time, we nearly emitted tears of joy. Your ship continually upgrades, while the enemies ramp up in difficulty and styles at a constant pace. In all honesty, this might be the best modern retro style game we have ever played. We also award the game extra points for the Atari ST “bee” cursor used on all the selections screens, and the fact that you can unlock Vic 20 and Commodore 64 versions of the game by advancing through the levels. (Although we will pretend the C-64 on is actually an Atari 8-bit version) 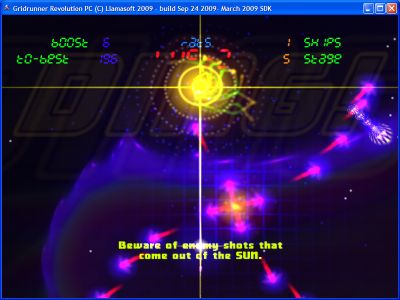 Right now this game is only available for the PC, but it certainly is perfect candidate for Xbox Live Arcade. Hopefully minter can work it out Microsoft to get the game on that platform very soon. 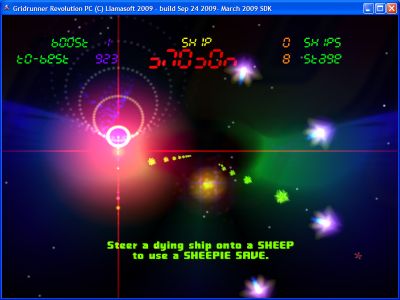