I don’t know why I haven’t got around to reviewing this one yet. I was never a huge fan of the fighting games in the 90’s (mostly because I button mash), but I always appreciated the technical skill it took to both create and play these games. 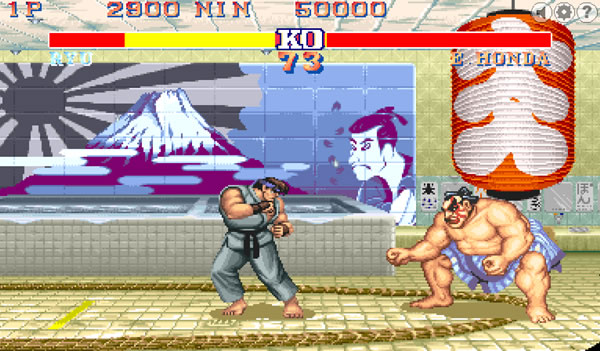 This is an official port, used as “adverware” to promote the latest edition of the franchise. From what I remember, this is identical to the arcade version and is an amazing technical achievement as a Flash game. All of the characters, moves and specials you remember are there (at least the ones I remember are are present). I’m not sure that the 6 key config is as easy to use as the Genesis (Medgadrive) 6 button controller I had, but it is still a very fun game to play.
Grade A.

GraveShift 2: The Sewers : This is a very well crafted isometric puzzle/adventure/arcade game in the same class as some of the classic Atari ST and Amiga similar efforts. You must traverse the multi-room levels, searching for artifacts and keys to open doors. There are many traps and puzzles to solve to make your way around them. The only problem I had was with the iso-control as the arrow keys are a difficult match for the actual direction the player needs to move. Once you get used to the control though, this is fun game to play.
Grade B+

Zombie Taxi 2: Zombie Taxi is supposedly a little like Crazy Taxi, but I never even attempted to pick up any passengers. The real fun is running over the green zombies and watching them splat into red goo. In this 2D overhead contest (it looks a little like the original 2 GTA games), your job is to drive around the town on your yellow taxi, picking up passengers to get them to safety from the zombies. Your car has nicely modeled driving physics and an extensive set of damage mapping. You can also upgrade your vehicle and there are a lot of things you can add with Mochi coins.
Grade B+

Froggy: A pretty decent version of the classic Frogger game. I played this game A LOT on multiple platforms in the 80’s. There is nothing really special about this tribute, but the graphics and nice and clean. A good effort at a classic remake. They get points for not stealing the original name or graphics, or sounds.
Grade C+

Lost Mouse: Move your mouse through the mazes and don’t touch the walls. A nice demo in the use of hitTestPoint. It works though and there are some decently designed levels. The icon for this one is hilarious.
Grade C-

WS Cup 2009: A soccer / football game played as if you are a 5 year old in an AYSO (American Youth Soccer Organization) game. Actually, it is EXACTLY like an AYSO game. There are 11 pretty stagnant players on each team, and you man one of them on the red squad. Bat the ball around hockey puck style and try to get it in goal. Scoring is not easy, and it is actually a little fun for a few minutes.
Grade C

Battlerun: Battlerun is a nice little arcade game that doesn’t look like much at first, but builds into as a sort of combination Galaxian/Robotron game. The interface and poorly looped sound could use a fresh coat of attention, but the core is a nice little game with some unique power ups and action.
Grade B-

Tunnel Syndrome: A really short, simple game with some Zarjaz effects. The game play leaves a lot to be desired, but this is supposed to be a simple game. You just need to keep your ship between the lines of the tunnel as it scrolls up the screen. The ship and tunnel move very fast and it is easy to hit the walls but there is not a lot of feedback when this occurs. In any case, I like the the visuals and sound but the game play is a little lacking.
Grade C-

Speed: Speed is a cool little arcade game. You fly your ship up the screen using the arrow keys and fire your weapon to move blue blocks out of your way with the WASD keys. The graphics are pretty basic, (your ship looks nice though), but the game is pretty fun (and difficult).
Grade B-