AS2->AS3: Making A Click And Stick Christmas Tree Designer In AS2 and AS3 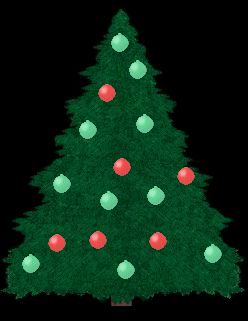 The application we are going to create will do the following:

The following assets are in the .fla library for this application:

Since we are going to create a class that runs the application in AS2, we need to create an instance of that class in the first frame of the main timeline. The following code does that.

Displaying Objects On The Screen/Setting Events And Callbacks

The constructor for XmasAs2 requires that a reference to the main timeline be passed to it. This is because we need a place to attach the objects we create from the library when we call attachMovie() for tree, greenbulb, redbulb, trash, and the bulbs we will create on user demand later.

We also need to set a dynamic variable in both redbulb and greenbulb named parent that is reference back to this instance of XmasAs2. Why? Well, because when redbulb and greenbulb are clicked, we need to call a function in XmasAs2 to create a new instance of a bulb. Since redbulb and greenbulb calla local function inside of XmasAs2 when their onPress event fires ( eventCreateNewBulb) that function will run in the context of those MovieClips, even though it lives in the XmasAs2 class. We need a simple way to get back to the instance of XmasAs2, and this is the way we do it. We could have created a Delegate to allow the buttons to run in their own context, or created the buttons as their own classes, but that would have created other issues and made the code even more complicated than it is already.

When redbulb or greenbulb are clicked they spawn an event that then calls the eventCreateNewBulb() function, which in turn, calls parent.createNewBulb() in XmasAs2 passing a reference to itself (this). This gets out of the button context and back to the context the instance of XmasAs2.

createNBewBulb() uses the reference to redbulb or greenbulb passed to it to determine which bulb was clicked and which color bulb to create. It does this by checking the the _name property that was set was we used attachMovie() to create them. Depending on which one was clicked, we then use attachMovie() to create a new instance of the bulb. Since we need a running set of depths for each bulb we create, we create a function named getNextDepth() that uses bulbCount as a running total. It returns a depth that can be used for the object.

We then need to attach the newly created “bulb” to the mouse. This is the “stick” of the “click and stick”. The bulb will stay attached until the user clicks the mouse button again. We do this by calling the startDrag() function of tempBulb. To make sure the bulb drops when the user clicks again (and can be picked up and moved later), we set the onPress listener to call the function dragTest. We also set the dynamic variable dragging to true (because the object is now being dragged), and create a dynamic variable for parent so we can reference the instance of XmasAS2 from the context of the bulb.

The dragTest() function is called whenever the user clicks on a bulb. This can happen when the user wants to drop a bulb that is stuck to the mouse or pick-up a bulb already on the screen. This function tests the dragging property of the bulb. If it is true, it calls stopDrag() set dragging to false, and then calls parent.testTrash(this) to see if the player has dropped the bulb on the trash can. If the dragging is false, we call startDrag(), and set the dragging property true.

That’s all there is to it. Here is the full code for the AS2 version.

The following assets are in the .fla library for this application. the main difference from the AS2 application is that these are now class references and not text identifiers, and we have appended an “o” to the front of the names so the classes they they don’t conflict with the variables we create for the objects.

Unlike AS2 where we had to create an instance of the application class on the timeline, in AS3 this can happen automatically. All we need to to do is set the document property of the main timeline to: XmasAs3.

The XmasAs3.as file contains some important differences from it’s AS2 counterpart. First, we need to specify a package in AS3, which is required for all classes. We also need to import the classes we are using before we specify the class identifier. However, because AS3 does things a bit more efficiently than AS2, we have fewer class properties to deal with. In fact, the main difference is that we don’t need any variables to keep track of object depths (bulbCount), and we don’t need those confusing dummy variables used by the bulb objects (parent, dragging), and we don’t need a reference to the main timeline (timeline)because our class *is* the main timeline!

Displaying Objects On The Screen / Setting Events And Callbacks

Compared to the constructor for XmasAs2, the constructor for XmasAs3 is clean and simple. We don’t have to use attachMovie() in AS#, nor do we have to create arbitrary “depths” to assign to each object. Instead, we just create instances of our object using class instantiation notation (i.e. tree = new otree()), position them on the screen the same way we did in AS2 (except we use the .x and .y properties instead of ._x and ._y), and add them to the main timeline represented by this instance of XmasAs3 by calling this.addChild().

There are a few interesting differences thought that need to be highlighted. First, we are going to listen for the MOUSE_DOWN event on both redbulb and greenbulb because onPress does not exist any longer in AS3.

Clicking and sticking bulbs in AS3 is a bit more straight forward than in AS2. createNewBulb() is stilled called when redbulb or greenbulb are clicked, but instead of testing the _name property, we test a dynamic property named clr to that we set in the constructor. This could be taken even further to have separate class for the bulbs with an instance variable for clr.

After creating the proper instance of the bulb, this function operates very similar to the AS2 version. We add a listener for the MOUSE_DOWN event (because again, onPress does not exist in AS3), and we also set buttonMode and useHandCursor both to true to simulate the functionality of the AS2 buttons. We don’t need to call getNextDepth() because this.addChild() does not require it, so we have omitted that function from the AS3 version.

The dragTest() function is also simpler and more straight forward in AS3 than in AS2. Since it is called from a mouse event, we get an instance of the MouseEvent class passed to the function, and it contains a magic property named target that represents the object clicked upon. Instead of having to pass around a reference to multiple functions, we can use this property. Also, in AS3 event callback functions execute in the context of the object that set them (XmasAs3), not the target object (bulb). This means we don’t need to pass around a reference to parent, we just operate inside the function directly.

Deleting an object is AS3 is nearly identical to AS2. The main difference is that the hitTest() MovieClip method no longer exists in AS3. It has been replaced with hitTestObject() and hitTestPoint(). hitTestObject() is essentially the same as hitTest(), so we use that instead.

And that’s it! Here is the full code in AS3.

Dowload the full code for this tutorial here.