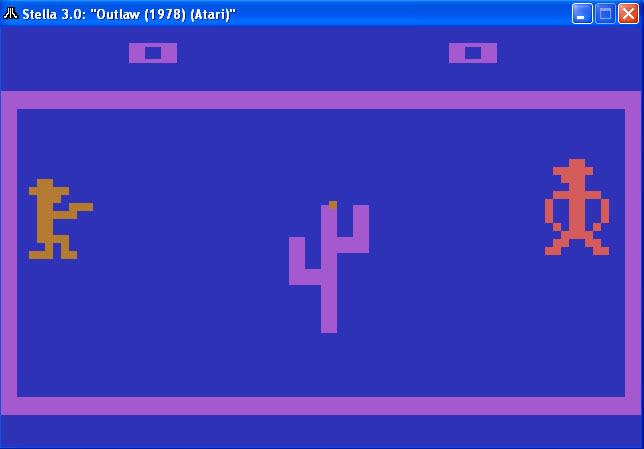 I literally have an entire pile of started, but unfinished retro games
sitting in folders on my development machine. I start and never finish at least
10-15 games  a year based on some whim, (examples:

7800 Asteroids, Daleks,
Pac-Man,
Air-Sea
Battle,
Star Castle,
Bosconian,
Gravitar, Food Fight, ,
and many more). So why I’m doing it again is anyone’s guess. You see, we have
the nice shiny new AS3 game development framework that we have created for the

book and I feel that it might finally help me bring more of my game ideas to
fruition. My new thought is to choose some very simple, but relatively untapped
game types from the Atari 2600, Intellivision, and other early 8-bit systems and
computers and make some more games for the site. By doing this I will be able to
accomplish a couple things:

1. I will make more re-usable classes specific to particular game types that
will plug into the framework

2. I will have some new games that will extend the book and give readers
extra content to test out

3. I will have some nice tutorial subjects to tap into once the book is
complete and  I have more time to write for the site again

We’ll have to see how much of this I actually accomplish, but my hope is that
the games will take no more than 10-15 hours to complete. They will each contain
an ad for the book, a Mochi ad, High scores, and
will be fashioned into a cartridge for our game arcade.  Ok, so on to the
game that is inspiring me today…

I I am privileged enough to own an Atari 2600 classic USB stick so my emulation
experience is very authentic. I downloaded the latest Stella emulator for
Windows and fired up the game rom. I have not played this game since the very
early 80’s so I was pleased to find it still quite enjoyable. After visiting the

AtariAge.com Outlaw page and reading the manual (you can also download the
rom is you need it) I went about playing he game to learn a little bit more
about it.

The game can be played by one or two players. Only the two player mode offers
an actual duel between gunslingers. The single player modes offer some nice
variations on “Point Blank” style target shooting contests. I have always been
amazed at how many game variations could be stuffed into an tiny 2K-4K Atari
2600 cart. I am even more amazed that virtually no other game system employed
the same style of variations along with the a/b difficulty settings that made
the 2600 such a joy to own. In any case. Outlaw contains enough material to
create a pretty good single player Flash game.

I will probably use an AI character in the stages that will have gunslinger
on gunslinger action. Here are some of the other game-play elements from the
cart that I will try to add in:

1. A Wagon that moves up or down the screen to block shots. This can also be
a cactus or a wall. Usually it can be shot piece by eliminate it, but on some
levels it will be solid.
2. Shots that can bounce off of walls
3. A  series of targets that need to be shot across from the player with
the the obstacles in between.
4. Limited ammo that must be replenishedr />
5. Moving obstacles and targets.

A little history of the Atari 2600 Outlaw Cartridge`

numerous other outstanding game titles. Outlaw was an adaption  of the
1976 Atari coin-op
of the same name. The arcade machine is quite different than the Atari 2600 cart
though. Outlaw was also released as

Gunslinger, a sears Telegames cartridge. Even though the game name, box art
cart design are different from Outlaw, it is essentially the same game with the
same 16 game variations. Both Outlaw and Gunslinger are much more comparable to
the Midway arcade
came called Gun Fight (1975) than the Atari Outlaw coin-op. Gun Fight is
notable for being both the first video game coin-op to use discreet TTL chips
and the first coin-op to be imported from the Japan to the USA. An official Gun
Fight port never appeared on the 2600, but Epyx did port it to the Atari 8-bit
computer line as a