Why Does Apple Hate Flash: The HTML 5 Canvas Might Be The Answer

Why Does Apple Hate Flash: The HTML 5 Canvas Might Be The Answer

Many people on the web have been questioning why Apple “really” hates Flash and why it has not been included in the iPod Touch, iPhone, or new iPad. Everything from “Flash runs slow” to “Flash is not secure” from “Apple was to control all apps” to “Apple hates Adobe” have been bandied about by internet pundits world-wide. However, while all of these are probably partially true, we think we might have found the “real” answer.

The iPod touch, iPhone and iPad all include Apple’s Safari web browser. Apple has been very active in the creation of the next generation HTML 5 spec. In fact, many people have speculated that HTML 5 support for H.264 is the reason why Apple can ignore Flash and it’s video capabilities. However, it’s not just H.264 video that Apple has hand in creating. They have also had significant influence in the creation of a new JavaScript element in HTML 5: The Canvas.

The HTML 5 Canvas is basically a bitmap screen that can be manipulated with JavaScript in HTML. Bitmaps can be loaded, cut, displayed, tiled, scrolled, collision detected, etc. all without any kind of external plug-in. These are the same functions that many professional Flash developers use to create their games. In fact, some HTML 5 developers have already created games that work in modern browsers and look very much like Flash games. This platform game is very good example: 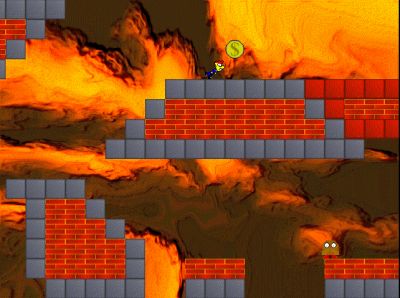 If you play this game in a modern Firefox or Safari browser, it will play very much like many Flash games. While it plays very well, there are some obvious drawbacks. There is no sound, and the code for the full game is available right in the browser, and it only plays in a browser that supports HTML 5. However, it looks promising and impressive.

So what does this have to do with Apple? Well the answer is right there on Apple’s Safari web page:

an area in HTML that can be dynamically stylized by a JavaScript program. Safari was the first web browser to

support HTML Canvas, and the standard is now supported by most popular browsers.

Did you get that? Apple invented the bitmap Canvas. By extension, the bitmap Canvas can do much (but not all) of what Flash and other plug-in like Silverlight can with bitmaps. As well the Canvas specification is not finished yet, which means as HTML 5 still evolves, the Canvas element will evolve with it.

The HTML 5 Canvas has it’s own controversies within the HTML 5 community that need to be mentioned. The Canvas does not allow DOM access to elements created on the Canvas. For many HTML purists, this goes against the grain of HTML standards. However, Apple has pushed for Canvas anyway, it seems to have taken hold.

So, does Apple think that if they avoid Flash long enough, while supporting the HTML 5 bitmap Canvas development and adoption, they can outlast Adobe and and their ubiquitous plug in? To us, it seems like that might be the case. We will be exploring the HTML bitmap Canvas in depth on this site in the coming months, as it seems like an important development for web game developers.