If you know 8bitrocket.com then you know we love Flash games. You also know that we love retro games. You also know that we love retro-evolved games, and that we love to interview and glean game development knowledge from the masters and creators of the genres we hold dear:  8-bit and 16-bit programmers for systems like the Atari 2600, Atari 800 and Atari ST. Last week we were please to find out a “perfect storm” was brewing along these lines, and was visiting our site. Steve Woita, a genuine Atari 2600 and Sega Genesis programmer not only contacted us, but told us that he was using our tutorials and information to help make his own Flash games. Nothing, and I mean NOTHING could be more exciting to us than to have one of our heroes not only contact us, but treat us like peers in this odd and fascinating journey through the world of Flash games.

Who is Steve Woita? Well, he worked for Atari during it’s final years as a viable company before it was broken apart and sold to lowest bidders. His credits include the Atari 2600 games Quadrun, Taz and Garfield. After he worked on the 2600, he also worked on several Sega Genesis titles including Sonic 2, Sonic Spinball, and Kid Chameleon. Woita has recently worked on Java and downloadable games, but now he has moved into the Flash game world.  We could not be more excited.

Steve Woita has a couple of very enjoyable, very “Flashy” Flash games in a very classic sense of the word. The first is called Findin Stuff. The game is very simple. Objects are called out that you must find on the screen and click them. It’s like an action version of those “hidden object” puzzles. While it’s simple, it shows that Steve grasps the difference between the games he used to make for consoles, and the simple but effective game play of viral Flash games. 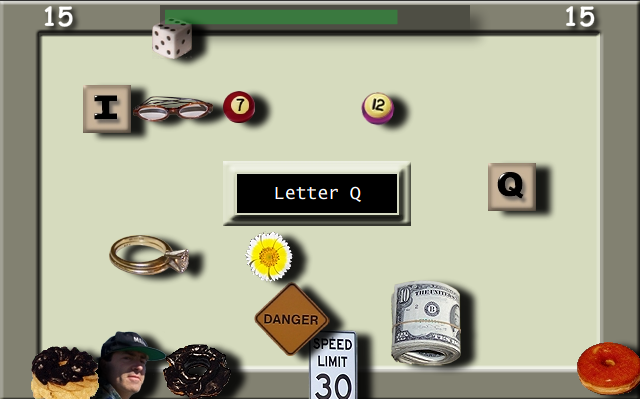 His other game (or games because there are two) are Dunk It and Dunk It 2. Both of these games involve consuming (rolling over) as many donuts as possible. Again, it’s a simple concept, but effective and addictive. I especially like the donut images, as they made me hungry just looking at them. (This seems to be a unibersal feeling, as a review he posted on the site says the exact same thing). This game, again, shows that Steve grasps the unique game play styles that Flash can bring to the game world as opposed to what he did in the 8-bit and 16-bit world eras.

I personally would like to see Steve Woita lift some of his old Atari 2600 and Sega Genesis ideas and aesthetic, and apply them to some “retro evolved” games in the Flash genre. Of course, this is also wishful thinking on my part, as I’m a huge fan of those games, but it’s not necessarily where Mr. Woita’s game design head is at right now. 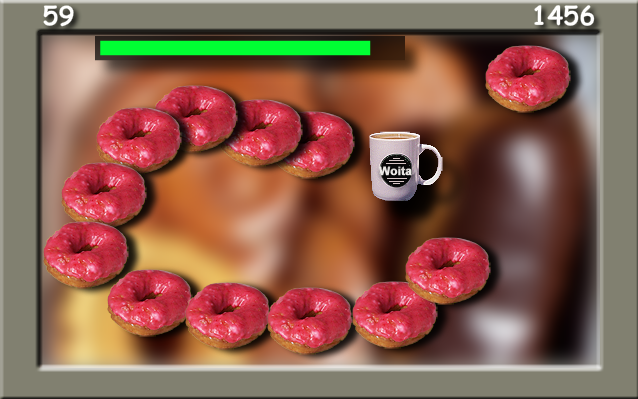 Interview About Flash Games And CGE 2010

Steve Woita recently contacted us about the CGE (Classic Gaming Expo 2010). To be honest, I (Steve Fulton) complained about it a bit, and he came to its’ defense. Seizing an opportunity, I asked him a few questions about CGE and his work in Flash games because we thought 8bitrocket.com readers would find it very interesting.  I think the result stands on its’ own.

8bitrocket.com: How may times have you attended the CGE?

Steve Woita: I think I’ve been to everyone of them since they started (a bunch of them, could be at least 10 or so). I know, my wife and I missed the 1st one (they had a different name for the show at the time), we missed it because there was some goofy terrorist scare at the airport back then.

8bitrocket.com: Since you have never stopped making games, how do you feel about the focus on the past vs. the present?

Steve Woita: A good game lives on and kind of breaks the time barrier of past and present. I play stuff that was just made hours ago and I play stuff that goes as far back as the late 70’s and it really brings back memories. I could care less about the platform it’s on, or when the game was made, just as long as the game is fun to play and it leaves me with a great feeling as I’m playing it. I hope to make games that everyone would love to play no matter what year it was. When we made games back in the early 80’s we tried (for the most part) to build games that everybody could easily pick up and play and hopefully always would like.

8bitrocket.com: How hard is it for a game developer like yourself, with so much experience, to continue innovating and keeping current as the industry moves on?

Steve Woita: Well, I feel like I’ve got more ideas for new types of games to build now then I did back then because there are so many great games to get inspired from now! Tons of new game play mechanics that players are used to interacting with now, which allows so much more game design creativity. Also, playing a lot of great games on many different platforms is a great way to keep the creative juices alive. I’m real glad that our industry didn’t die back in the mid 80’s. You wouldn’t believe how close we were to not having a video game business anymore. If it weren’t for Nintendo back then (with the NES), the game biz may not be here now. I couldn’t be more happy about how giant the game business is and how innovative it has become, plus we have such great supply of development tools now a days to build our game ideas. I would say that the hardest thing for me to deal with over the years is what platform to write my games for, it always takes awhile to master each of these platforms and they’re always changing. Flash seems to be one of my favorites. One big reason for that is that it has a gigantic development community around it. Big example of development community are sites like 8bitrocket. I’ve learned a lot on this site.

8bitrocket.com: Do you see similarities in the the current Flash game “industry” and the days you spent at Atari, Sega, etc?

Steve Woita: Oh yes. Small teams, no game documents (or very small documents if any) and a lot of creative energy that’s not sucked out by feeling like you’re on an assembly line. The fact that you can change the game design and code stuff without having some gargantuan meeting is the only way to go. What I mean by that is if your game is playing weird and you know what you need to do to fix it, you just fix it. The feedback / iteration loop was fast back then and is the same way now with the current crop of Flash games that we’re all building.
Plus with small teams or a team of one, it’s very easy to vote on things development wise and move forward. Obviously there are some big Flash games being developed now that are starting to need console size development teams, but I think there will always be room for the small developer.

8bitrocket.com: What do you think current game developers could get out of going to the CGE?

Steve Woita: Great inspirational and totally hilarious stories and a fun history of what a great time it was making games back then and how in a way it’s similar to building games now in Flash or on XBLA. One thing you’ll definitely hear a lot about is how we all had these crazy technical constraints like 128 Bytes of ram or 4 KBytes of Rom, 5 moving objects, a 4 color clock wide chunky play-field and a 1.19 MHZ 6502 (6507) etc., but you know, I really liked designing games around those limits and in a crazy way I miss it a lot 🙂

Thanks to Steve Woita for talking to us about his newest ventures!