A closer look: The Games Of Ace The Super Villain #1: Aceroids

A closer look: The Games Of Ace The Super Villain #1: Aceroids

Ace is a relatively new Flash game developer. Having cut his teeth making games with Game Maker, he has started to port some of his ideas to to the Flash platform. Steve and I have gotten to know Ace over the last year via email. He is a talented artist, with a very unique style, who is starting to develop some very nice technical skills. Let’s take a look a one of the games he has released in the last few weeks. We also have a couple drawing tutorials from Ace in the pipeline, but over the next week we will take a look at a few of his new games before we get to those.

Now, on to the first game. 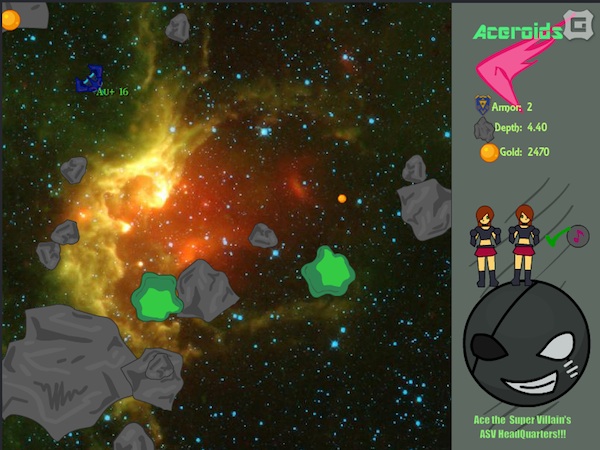 Aceroids is a very well made cartoon style Asteroids contest with some very large colorful sprites and lots of stuff to blow up. I have played just about every Asteroids style game ever made so I am a good judge of the fun factor in this style of game. This one is closer to the classic Blasteroids than the original Asteroids, and I have to say that I had a lot of fun playing it. It uses a familiar arrow keys to rotate and thrust and space to fire that has become somewhat of a standard in the last few years for controlling classic Asteroids variants. Your job is to mine space gold by shooting giant space rocks. The gold is unstable and will not stay around for ever, so you have to be pretty quick to pick it up.There is no traditional score in the game other than the amount of gold that you collect.

When you first start up the game you are faced with choosing one of three ships: 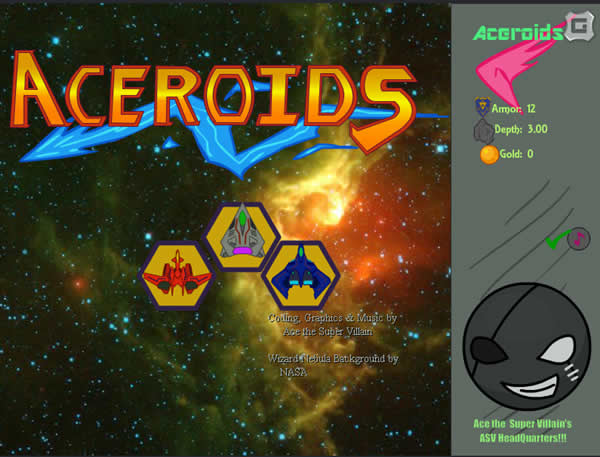 Once you choose your ship (I’m not quite sure of there is a difference in control or features for each ship other than a unique look), you re dropped into a familiar Asteroids style single screen arena style play field. Unlike the original Asteroids, in Aceroids you cannot warp off one side of the screen to the opposite. In this game you bounce off of the walls. Ace has crafted some nice ships and rocks in a very non-pixel graphics, art-based style: 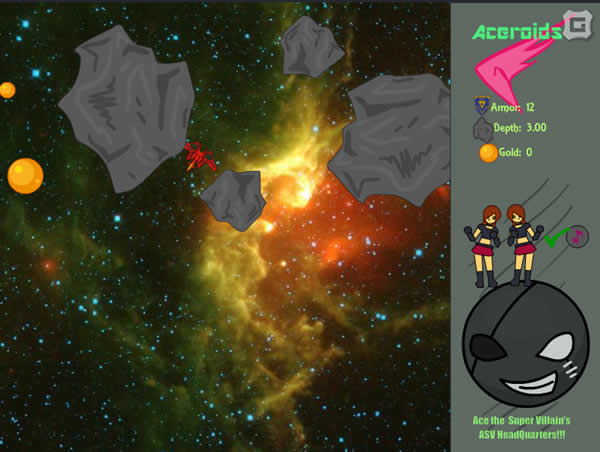 As you can see, the sprites are huge and colorful. The yellow floating objects are gold that you can pick up to complete the “space gold mining” theme of the game. There are some very strange space life forms that will come on to the screen and disrupt your pleasant rock shooting and gold collecting: (the giant thing with purple tentacles and 3 eyes is a difficult monster to destroy) 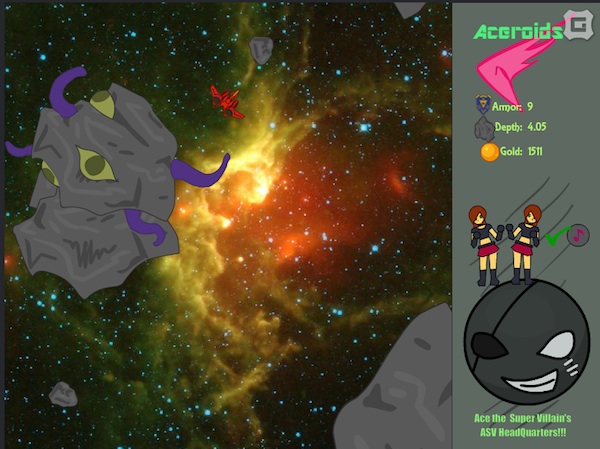 The music loop is very fun and upbeat, although it can become repetitive, but I do like it. The dancing girls on the scoreboard almost seem to be rocking in tune to the song, so it makes for a very fun atmosphere. The game play boils down to little more than a fun take on Asteroids, but don’t let this stop you from having a go. The controls are a little loose and thrusting is a recipe for disaster, but the HUGE rocks and fun space life forms that you encounter make this one a blast (literally) to play.  Ace has a very unique style and sense of humor all his own that you are certain to enjoy.

Try it at NewGrounds 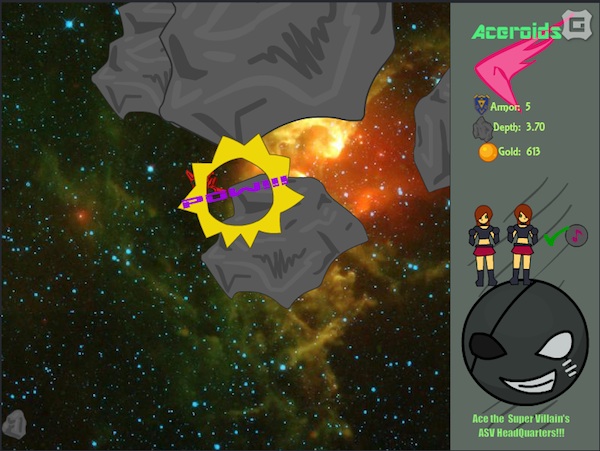 {hint shift+ 1, 2, or 3 will let you switch between the different ships while playing)