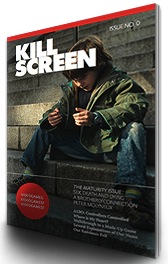 I’ve written had many stories through the years at 8bitrocket.com about video game magazines. I’ve covered personal stories about magazines like Electronic Games that influenced me while growing-up. I’ve interviewed some of my heroes of the first era of video game journalism like Bill Kunkel, Arnie Katz, and Michael Schrage. I even once reviewed an issue of PC Gamer magazine (after which, inexplicably, my subscription was canceled). I’ve done this because I love the medium of the video game magazine. At least, I once loved it. However, In the past decade I found myself buying the magazines on a less and less frequent basis. Even when I did buy them, I would usually start reading from the back of issue, where (most of the time) the best stories were stashed. Ever since magazines started to include overly hyperbolic previews, followed by numbered and scored reviews, I’ve found myself skimming those sections to get to some kind of meat of the type I once adored in back pages of the magazines I read in the 80’s and 90’s. Those usually came in the form of columns, speculative pieces on the future of games, or long-form stories about game design and development. Last year, when PC Gamer dropped all their columnists (recently reinstated), I felt the final limb had been drawn on the “hangman” game for the medium of the video game magazine.

Then I read about Kill Screen.

I think I found the link on one of my favorite sites, gamesetwatch.com. It was a magazine that purported to be something completely different. It began as a Kickstarter.com project, asking for donations so that the magazine could be printed. Normally, I would not have cared, except for these two paragraphs on their kickstarter site:

There is a single question that we are fixated upon “What does it mean to play games?” We want to be what early Rolling Stone was to rock n’ roll or Wired was to tech. We want to look like the Fader and walk like the Believer. We’re talking about the long format read on the creative minds behind AAA and indie game titles sided by the personal essays about what games mean as part of our daily little lives. There are intersections between the games and everything else that are only beginning to be explored. The minds of the videogame world are woefully faceless and we should change that.

Here’s what we’re proposing a smart approach to a beloved medium led by folks who’ve written for the New Yorker, GQ, the Daily Show, Christian Science Monitor, LA Times, the Colbert Report, the Onion, Paste, alongside some lovely photos and even a poster or two! We promise to keep explosions to a bare minimum and limit fawning praise for Modern Warfare 2 to a giggle.

This seemed to be exactly what I had been missing for a decade (or even longer). There were several levels of donations. I could have given $5.00 for .pdf, but I wanted real MAGAZINE. To hold in my hands, put on shelf, or read on the can. I chose the $20 option because I could both feel “involved” and get a physical copy to covet. The whole idea of a magazine about video game written by adults (even if those adults were younger than me), was exciting. I checked the web site a few more times in December, and then I forgot about it. Many months went by, and last Saturday it arrived on my door step.

To be honest, my first reaction was of being “under whelmed”. I leafed through it once very quickly after the kids had gone to sleep, assessing the situation. The publication is roughly 3/4 the size of a regular magazine, and at 65 pages contained lots of “artistically placed” white-space. I have to admit, that the disappointment was palpable. I guess I expected a glossy publication that had the texture, size, text depth, and smell of magazines from the days of old. I paged through it, but did not read a word, and promptly fell asleep.

The next day, my wife and kids and I went on a hike together, so I had no time to check it out again until later that evening. Again, when everyone else was asleep, I took a second look at Kill Screen issue #0. I recalled why I paid $20 in the first place. It was not for a huge glossy magazine, it was for the promise of writing that might re-animate video game magazines out of grave dug for themselves in the 21st century.  I wanted to read stories about games that made me “feel” something more than anger at cookie-cutter reviews or uninformed opinions.    I picked up the magazine again, and noted the things that I liked about it. It was printed in full color, on a stiff card-stock almost like a literary journal. Also, there was no advertising, so every one of the 65 pages had the potential to say something interesting that I wanted to read. Then I opened it up and did just that.

When I had made it through every story I noted what was *not* there. There were no reviews with scores or otherwise. There were no massive previews. There was no outdated, web-scooped news. There were no strategy guides, release dates, or letters to the editor. In fact, absolutely none of the common features of a video game magazine appeared in Kill Screen Issue # 0. I did not miss them.

So what did I find? Validation.

I always knew there was more to my love of video games than pixel depths, polygons, and licensed power-pop songs. In fact, many times I’ve tried to capture my own feelings about the nature and importance of video games in my life, but have mostly failed. I’ve tried to locate stories like these on the internet, but they are sparse and hard to find. Here, in my hand, was a collection of stories better written than any I could hope to write myself, but with many of the same emotions and feelings that I had been trying to capture. Even though I was not familiar with any of the writers, I understood their voices almost immediately.

The first story that really drew me in was “Player One, Player Two” by Jason Killingsworth. This was chronicle of a guy who learned to be friends with his younger brother by playing video games together. Since my brother and I had very much the same experience, this one was close to my heart.  I was happy to read that someone had the same type of experience, and it was important enough for them to write about it. The next story I read, “Play In Isolation” by Ryan Kuo was about indie game designs. The focus of the story, the game “Where Is My Heart”” about hiking and relationships by Bernhard Schulenberg, hit very close to home. Since I had just been hiking with my family (and, inexplicably, designing a video game with my kids as we walked), I could see the brilliance in this idea. The complex interactions between children and their parents should be ripe fodder for games of all sorts, yet the ground of that path has hardly had the dust unsettled, much less had a path beaten into it. Still another piece that resonated was “Us vs. Them” by Leigh Alexander. It was a story about the quest to find like-minded lovers of video games in sea of kids with no frame of reference and guys who like sports games. It mirrored many of the feelings I’ve had trying to make friends in the modern world.

There was much more to enjoy as well. From the bizarre (“Walk through For A Made-Up Game”), to the meaty (“Air Traffic: A Million Miles”). One nice thing that I did not expect were the stories of specific games. Even though none were games that I was necessarily interested in playing, they were told from the perspective of how they resonated with the writer, which transcended the the topic and kept me reading. There were also some clever cartoons and art work of the kind you would not normally associate with a magazine about video games (read: no manga boobs…thank the Lord).

The one warning I have should be obvious: this is not your little brother’s video game magazine. There was little overtly objectionable in Kill Screen Issue 0 (some mild drug and sexual references that should go over the heads of most kids), but many of the stories required a bit of life experience to understand and fully appreciate. I  recommend it for adults only, or at the very least, for smart kids 15+. Also, while I loved what was there, I still feel that there was not enough of it to justify the price (beyond the first kickstarter issue).  I’ve purchased similar-sized trade paperbacks for $14.99 and copies of Retro Gamer magazine for about the same price, so that seems be a point that is closer to something palatable to the audience. If that is not possible, then a few more good stories and images for the asking price would be very welcome. No matter though , I would still have to call Kill Screen Issue 0 a rousing success. All I asked was that it made me feel something about my place in the world of video games, and the place that they have in my life. When my throat well-up reading “Player one, Player Two”, I knew it had achieved that goal that several times over. I plan to buy the next issue, and if the quality continues at this level, I
might just be hooked for good.

You can check out Kill Screen here: http://www.killscreenmagazine.com/