So I decided to take the two games from Ch. 1 of the Essential Guide to Flash Games, and iterate them into a couple new games.

The idea here was to let my three daughters (ages  4-11) design some graphics, and then use them in games.  They all made some very “kid friendly” designs, that I scanned-in and used to make three games.  Two of the games were based on the Ch 1. games in The Essential Guide To Flash Games, and the 3rd was based on Neon Bricks 4K from the 4K Game contest from last year.

Each game conversion took about 4 total hours to complete.  This was a fun weekend project that I got to do with my kids.  Some days, I think these are the most gratifying projects of all.

The first game, Bunny Breakaway is based on Neon Bricks 4K, and is not one of the Ch 1. games from The Essential guide To Flash Games.  This is a simple Breakout Style game that uses the mouse to move and fire.

The second game bunny battle is based on Pixel Shooter from Ch 1. Of The Essential Guide To Flash Games.   Here an image of the screen from pixel shooter: 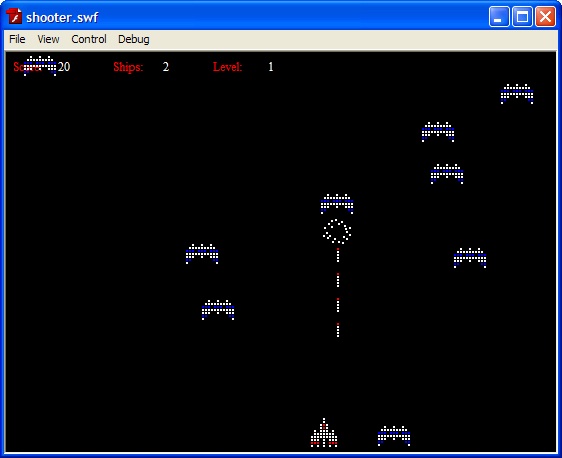 This is a very basic game.  You shoot those aliens that come down randomly.  that’s it.  You learn all sorts of cool stuff while doing it, but the game is very simple.

Bunny Battle takes that game, and makes it into a take on Space Invaders.  I think this game was the most successful graphically.  Sure, it still looks like pencil scribbles, but they work the best here I think.

The third game, Bunny Catch is based on Balloon Saw from The Essential Guide To Flash Games.  Balloon Saw is a very very simple game.  You move a rotating blade around the screen, popping balloons.  That’s it. Here is an image from that game 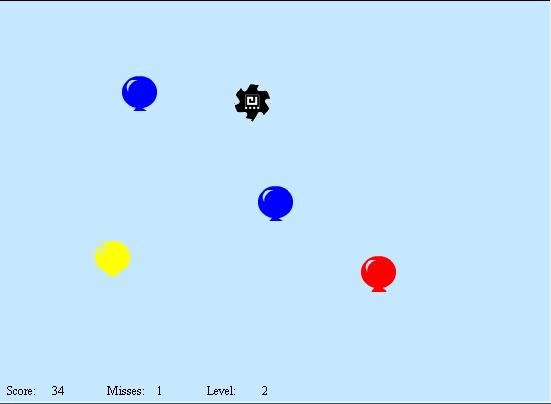 For Bunny Catch, I reworked Balloon Saw into a traditional “catch” game.  This is still very basic.   One interesting thing I did was create a black 2 pixel glow filter around each drawing that the kids made.  This made them stand-out against the painted backgrounds (painted by a 4 year old).

Are these games amazing? No?  Are they even good? Not really.  However, the point is, they were easy to make.  I was able to make all three in one weekend.  The ones that took the shortest amount of time, Bunny Catch and Bunny Battle were iterations on games from The Essential guide To Flash Games.  At the same time, kids were thrilled to see their drawings in games.