Synopsis:
Sensational World Of Soccer 2010 Review.
Are you a USA fan who wants to replay the England match and try to put more goals by the hapless Robert Green? Are you an England fan who desires the opportunity to massacre a virtual  Tim Howard?  Are you an Argentina supporter who thinks he can take a digital  Messi to the promised land against the likes of Nigeria? Now you can and for only $6.99!  The brilliant single-button control scheme and classic 2D overhead game play will have you enthralled for hours as you guide your favorite country to World Cup glory.  You even have control to edit tactics and save/load your favorite goal replays.

Unlike what most of our overseas (and over border) friends might assume, Steve and I have been fans of the world’s game for our entire lives. I have watched every World Cup since 1978 (when only the matches that interested English fans were cut to 50 minutes and taped delayed to PBS stations in the USA). Living in Los Angeles that entire time (with no less that 5 Spanish language stations) we were also afforded the opportunity to also watch every match that mattered to Mexican, Central, and South American fans (albeit in  a tongue just slightly less difficult to understand for a 8 year old then the British PBS broadcasts).

We also played the youth game from age 8 until 15 and then took it up again at 25, playing  another 10 years with local leagues and teams to prove we still could. During that entire time (and beyond) we have supported the USA national team and all local pro teams even when there were only a hundred of us watching them at El Camino college stadium in Torrance (1984) up until now when the USA team boasts its largest fan base ever and a team of 23 that play in the best leagues in the world (including 3 great players from the local under-rated MLS).

Being such a fan of the game I was always happy to get the latest Anco or Sensible import footy game for  my Atari ST in the late ’80s and early 90’s. When I was forced to swap the ST for a PC in 1992 I was very disappointed with the state of football (soccer titles). The FIFA titles were always good and looked great but didn’t have that classic playability that Anco and Sensible afforded the game player. Also, the sheer number of buttons needed to control play started to become ridiculous when it was 3 (Sega Genesis version in 1995) and that morphed to absolute lunacy with the 20 button version that I attempted to play last week on the 360.

A couple years back I was trolling Bigsoccer.com and found a thread on a PC soccer game called New Star Soccer 3 (NSS3). Created by indie developer, Simon Read, this game was a revelation. It was a combination of Anco Player Manager and Sensible World Of Soccer – two of the best footy games I had on the Atari ST.  Since then I have purchased every footy game Simon has put on the market (all of very reasonable prices from free to $20). Between versions of the full New Star Soccer (version 5 will be released this year), Simon has tested the market with a stripped down (read –  no player, team, and league management functions) match-engine only version. This year is no different as he gloriously takes on the 2010 World cup with his new match engine called:

Harkening back to the simpler times of computer soccer (footy) games, Sensible World Soccer 2010 comes out swinging with an impressive looking and playing set of “ball skills”, “solid fundamentals”, and a little extra “magic” in places to make a wonderfully fun game to play especially given the $6.99 price tag.

Something old returns and something new is added

Shedding the solid (if not spectacular) 3D visuals of NSS4, the new
match engine boasts a refreshed version of the NSS3 2D match engine look
and style. While the match perspective returns to 2D, the control system has been upgraded to a “single-button” model. The longer the button is pressed, the harder the shot or pass. On defense, you only need to run into players to strip them of the ball (based on basic team skill attributes and positioning), but pressing the button will initiate a slide tackle.  This helps to greatly simplify the game-play to an extent (for me at least) and helps put emphasis on solid passing combinations to create scoring chances.

The ball sticks to the foot of the player in control (Sensible model, not Anco) and this makes for a relatively easy and fun way to zig-zag down the pitch, passing and dodging the “enemy” ala Messi.

It’s the World Cup just without the name

Simon has modeled the tournament portion of the game after this year’s world cup, using the Fifa rankings of each team to create aggregate skill levels for the competition. 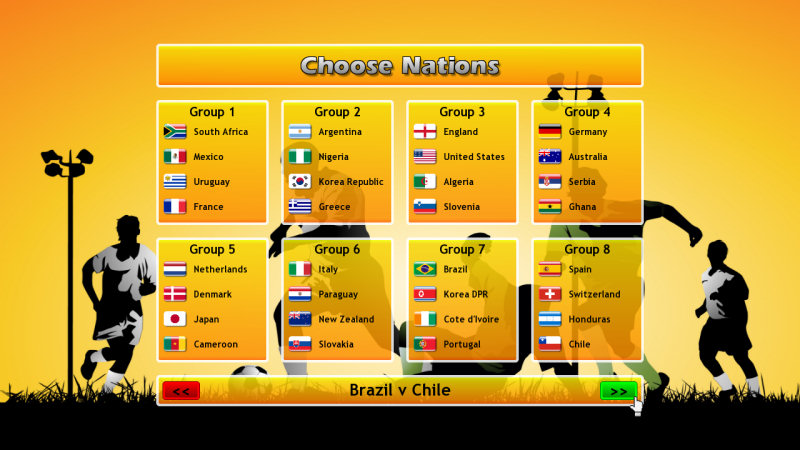 The Game In Action

After selecting the USA as my team I was treated to the above screen that let me skip through the other matches (seeing the scores) until my match came up on the schedule. Simon has added some wonderful South Africa inspired music (my wife was especially keen on this aspect of the game – the only aspect she appreciated as she has never played a game on a computer other than Tetris). 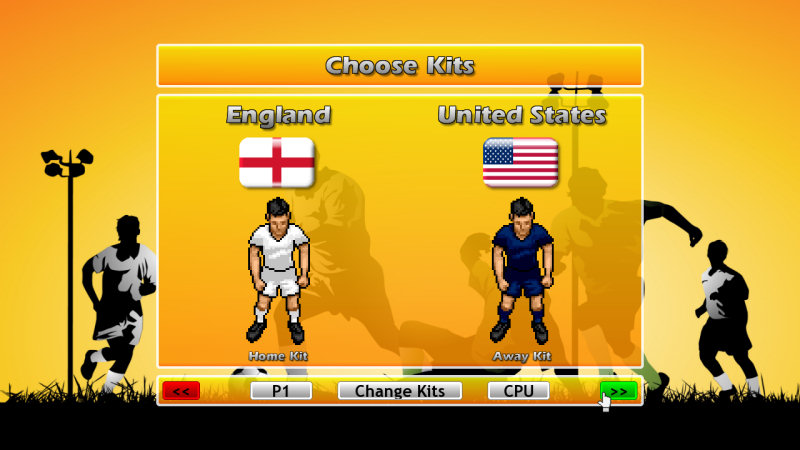 My first match against England came up and I was able to choose to change to the preferred white USA kit (they usually win in white and lose in blue, go figure).
Ed Note: or tie as we found out today.

I quickly was able to get the hang of the single-button control by racing down the pitch, passing once (using the nifty radar screen to find my nearest compatriot in white), rounding the keeper and placing a shot to the upper corner – “Fucking Awesome” was my response.

After this game I was able to take the USA to the finals and beat Brazil 4-1. The point here is that the skill of the player behind the joystick is much more important than the perceived skill levels usually modeled into games such as these.  This makes for some intense arcade footy action the likes of which I have not played since Kick Off 2 in 1990.

Before each match you have the choice of selection pre-created tactics
and formations or you can dive in and create your own. You also have the
ability to modify a host of toggles such as game speed, match length,
radar screen size, difficulty, and more from the options screen any time
(before or during a match).

If you enjoy a good arcade soccer game, especially if you remember classic over-head 2D 16-bit footy games from late ’80s and early 90’s, you will not be disappointed in Sensible World Soccer 2010.   At $6.99 it is quite a steal and worth 3X that price. 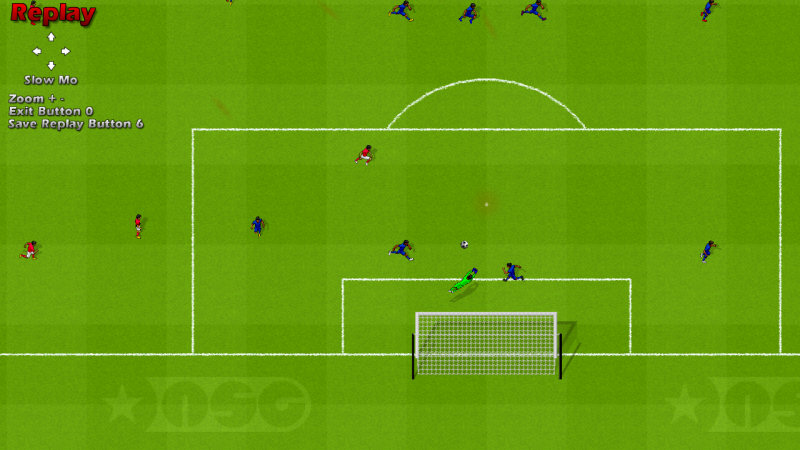 Both native Mac and PC versions are available. Up to two players can duke it out footy style at the same machine with a variety of control options. My favorite was to use the Legacy Engineering Atari Retro 2600 stick.