Although I had no idea in early 1981, my brother and I were video game obsessed twins on a collision-course with the pinnacle of ultimate geekdom: computer ownership.    We both loved arcade games and owned an Atari 2600 that we played constantly.  We spent all of our money on Electronic Games magazine, arcade tokens, and Atari cartridges.    In the course of our many adventures searching for good, cheap video game thrills, we stumbled across a store named HW Computers.   HW was part of a chain established among the first wave of computer stores.  The shop was a mish-mash of t-shirted techies,  cheap business-suited sales guys, IBM clones, Apple IIs, and walls of elaborately shaped boxes of software and games.   We were there looking for the 2600 versions of Asteroids and Space Invaders, but instead we found something better…something amazing to me at the time.  In a glass case HW computers had a display if one most beautiful creations I had ever witnessed: an Atari 800 computer and 810 Disk Drive.    Atari made computers?  We had no idea!  We picked-up a catalog of Atari software, left the store, and our passion for computers was born.

Over the next two years, my brother and I schemed and scouted all avenues possible to obtain the pinnacle of our childhood dreams: an Atari computer.   Knowing how expensive computers were at the time, and how little money my parents had, we knew we were going to have to be mighty creative in our endeavors if were ever going to see our plans come to fruition.   The first thing we did was to educate ourselves.  We poured-over the software catalog from HW, drinking in every game description with complete wonderment over what the experience might hold.  Titles like Energy Czar, Temple Of Apshai, and Star Raiders had us drooling with excitement.    We checked-out books on basic programming from the library, learning line numbers, loops, gotos, gosubs, plot and color statements.    Soon we were fashioning our own programs on notebook and graph paper, designing games and graphics, and anything else we could think of.  We had no way to test-out our ideas, but that didn’t stop us from imagining the possibilities of what a computer could do.  Still, being able to program a computer did not mean we would ever have one.  If our plan was going to work, we would have to start really working on getting a machine into our house.

Our first chance came in the summer of 1982.   MacDonald’s had an Atari Video Game ‘Scratch And Win’ contest, giving away 1000’s of Atari products, including 5200’s and Atari computers.  We resigned ourselves to win the contest.  That summer, in between stints at the arcade that offered ‘8-tokens for a dollar’, we would haunt the local MacDonald’s, looking for discarded game-cards on the ground, and braving old Big Macs and soggy fries as we searched the trash cans in and outside the restaurant.   Out of the 100’s of game-cards we found, none of them were Atari winners.     The best we did was to win fries and Cokes, but we were too disgusted by MacDonald’s food by that time to eat any of it.    As the summer passed, so did the Atari computer dreams, and by the time we were back in school the idea was pushed-back, but not forgotten, as 7th grade got under-way.

In early 1983, Atari announced a new line of low-cost computers.  The XL line consisted of the 600XL and 800XL replacements for the Atari 400 and 800 respectively.  Both had sleek new designs, (straight-edges replaced the space-age curves of the older machines) with BASIC built-in.     They certainly were not as beautiful or engaging as their older counterparts, but they were much cheaper and this fact alighted our dreams once more.   At the time, our dad had been working overtime at Hughes Aircraft with a new computerized CAD/CAM system.   Without any knowledge of our computer obsession, he started coming home and bestowing upon us his wisdom about the virtues of this new computer system, and how computers were going to change everything.    Our father had a degree in Fine Art from Syracuse University, and after spending 20 years trying to land a decent job, he knew the value of not wasting a college education.   He warned us constantly that we would ‘end up on skid row’ if we wasted our education and didn’t find a skill that was sellable.   At the same time, he constantly complained about his job, and told how most of our work lives would be spent ‘dealing with boredom’.   As well, with his overtime work, he seemed to have a bit more cash on-hand than usual.   My brother and I decided it was time to tell him about the Atari Computers we have been coveting.

Our dad was blown-away by our enthusiasm on the subject.  We showed him the books we checked-out, the programs we had written, and the catalogs and magazines we had about Atari.  We swept him up in our computer dream, telling him about how we could grow-up to be programmers (a sellable skill) and not be bored with work (because computers were cool!).   He bought ever word.   He had no idea his kids were so interested in something so technical and modern.  With little coaxing, he joined us in our quest to make the ‘Atari Computer Dream’ a reality, and even better, he wanted to do it by Christmas. 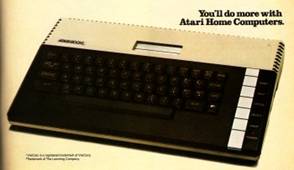 In the months that led-up to Christmas 1983 we made attack plans on just how we would make the Atari Computer plan a success.  We listed all the things we would need:  800XL, 1050 Double Sided Disk Drive, a box of 10 blank disks, and a color TV for output.   My dad took care of the color TV by setting us up with a refurbished one he built from taking night classes on television repair.     We kept looking for the best prices on the Atari machines.  Every week we would check the ads in the Recycler, and take a trip to Fedco and Gemco to see if a shipment of 800XL’s had arrived.   In the Autumn of 1983, the Atari XL computers became one of the best-selling lines in the world.    Simply finding an 800XL was becoming a problem.   As the weeks before Christmas turned into days, the outlook became bleaker and bleaker, as there were none to be found in any stores.

On Christmas Eve, we still had no computer purchased, and all hope seemed lost.   We took one last trip to Fedco, just for the hell-of-it.     It was Friday December 24th, and it just-so-happened to be the same day Fedco finally received their first shipment of Atari 800XL computers.  We were amazed, and dazed. Our dream of almost 3 years was coming true, and on Christmas!   My brother and I ran around the aisles, gleefully picking out everything we needed.   However, our father was not as enthusiastic.  He looked quite shocked that the store had anything in stock, almost like he had planned to find nothing there.   In fact, he looked rather glum.   As we dashed around the store, he finally got up the nerve to give us the news he had been holding back.   There would be no Atari 800XL this year.  He did not have enough overtime-pay to buy one.  We would have to wait even longer.

Devastated, my brother and I went home and sulked.  Christmas was ruined, and there was nothing we could do.  We both wished our dad had never latched-onto our plan, as it only raised our hopes only to dash them in the worst way possible.    However, church and family added some spirit back, and soon we got caught-up in the evening.   It was Christmas by God, and it would still be fun, as it always was.   Since the holiday fell on a Saturday that year, we would have two full weeks to play with whatever toys we received.   Even without a computer, we still might get some Atari or Vectrex games, and that couldn’t be all bad.  Sleep that night was tough though. All the pent-up energy and feelings from years poured into twisted dreams about the Atari Computer Christmas gone-awry.  Asleep, awake, asleep, awake, with dreams in- between about what could-have-been: programming our Atari 800 XL, playing computer games all day long.

Christmas morning and the next two weeks are a complete blur in my mind.  For how precisely I remember the events that led-up to Christmas 1983, the events afterwards live in a state of suspended animation, where all memories seem to rest on-top of one another as if they all happened in tandem. My brother and I awoke, and things were just as my father had said.   There was no Atari 800 XL, and there was no Atari 1050 disk drive.   There were no shiny new computer games in elaborately shaped packages.  In their stead were two giant Atari Computer boxes, one for an Atari 800, and another for an Atari 810 disk drive.   Next to those was a box filled with books and two 5 ‘ inch floppy disk holders filled with disks.   Our father had not lied.  He could not afford a new Atari 800 XL,1050 disk drive or brand new computer games.   His buddy at work, Dave Elwood, had sold him an older Atari 800, with its beautiful curved design, an older model 810 disk drive, and all the software he had collected for 3 years.     It was like discovering The Lost Dutchman Mine when you thought you were on a trip to have your teeth pulled. 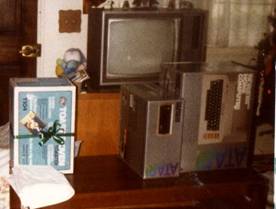 My brother and I dived into that computer and all the riches it held and did not come-up for air until two weeks later when we had to go back to school.   We wrote programs, played games, and discovered everything we every wanted to know about owning our own computer.   Mr. Elwood had collected dozens of games, and we tried them all.   Every Zork adventure, every Scott Adams Adventure, all the Atari created arcade translations, Star Raiders, and tons of others.  We explored financial programs, graphics demos, the realms of the public domain, and everything in-between.  Nothing was off-limits, and everything was of the utmost interest.  It was the purest moment I ever knew as a child.   It was the joy of complete intellectual and sensory discovery.  The computer held the promise as a device that we could control, and meld into what we needed and wanted, and as an unlimited tool for learning and creating. 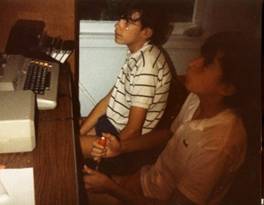 20 years later, I still feel that way.   I may be older and grayer, with 100’s of games played and 1000’s of lines of code written behind me, but the discovery of that Christmas will never change.    My love of computers, programming, and games has grown and changed over the past two decades, but I now seem to be at a crossroads with it all.  In a time when ‘Global Sourcing’ threatens my job on a daily basis, and multi-million dollar soul-less video and computer games threaten to destroy my hobby,  I look back on that Christmas to remind me of the reasons why I still program computers for a living, and why I still play games.   There is always the hope of the next great discovery, be it technical, or the story of a great game that will make me say ‘wow!’ with a pure heart and no irony what-so-ever.   I seek to recall Christmas 1983, and to retain a tiny bit of that nerdy 13 year-old boy I once was: the one that believed, with computer in his hands, and a dream in his head, anything was within the realm of possibility.