A new game, called Space Eggs, has launched on 8bitrocket.com.We want more games on this site, so I have been going back and finishing up ideas of games I started a while back. The first was a game called Gradient Asteroids Optimized. It was the beginnings of the first game I created in Flash to use bitmap animation arrays for performance improvements. This game became the alpha for Retro Blaster! called Space Eggs!. I called it Space Eggs because supposedly the Asteroids in Asteroids have been replaced with alien eggs that you must destroy. Mainly I did this because I had trouble drawing asteroids and geometric shapes filled with gradients were the best I could do. It is a fun little shooter. Collect the “alien computer brains” to add extra weapons and abilities to your ship. The game has no official end, it just get more difficult as you proceed through the levels. One thing I spent the most time on was changing and improving the sounds and music from Retro Blaster as those existed in the alpha as well. 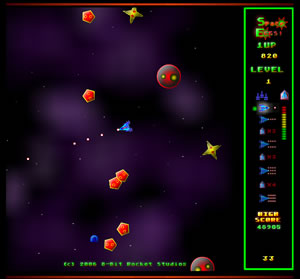