Sifting through my huge collection of vintage games and roms, I have selected a few I have never played to test out. First up is an Atari ST / STE game that was released in 1991 by Eclipse. It is called Lethal Xcess. It is a scrolling vertical shooter in the Zolar Mercenary (Lynx), or Foundations Waste (ST) mold. Supposedly this game literally pushed the limits of Atari’s popular 16 bitter. After testing it out, I am stunned that the STE could push that many objects around the screen at the same time. I remember early ST games being much more limited. Obviously, the Blitter and extra color capability of the STE help create the wondrous achievement, but most of the technical kung fu came from individuals with a passion for the machine. The technical innovations in the game were a direct result of the vibrant demo scene that pitted the wizardry of Atari crews against Amiga masters in advanced displays of their chosen machines capabilities. Most of the principal developers of this release were members of one or multiple Demo crews. They released an Amiga version also.

Since the Atari machine did not contain any Jay Miner custom chips, as the Amiga did, the ST crews needed an extra level of technical brilliance to match some of the more easily attained visual mastery of the Amiga crews. They needed to push the limits of the ST to create effects that were becoming standard on console systems of the day (Genesis – Megadrive, TG16, and Super Nintendo). The usage of the 56 over scan, vertical lines of resolution, (Andreas Franz) and sync scrolling (TCB) were first perfected by the these demo crews and are used to make this technically superior release. You will also notice the use of what looks like many more than the standard 16 allowable colors on the screen. This was done through the the use of interrupts. 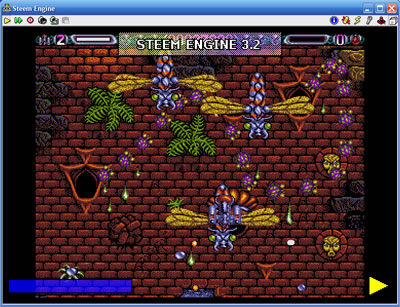 Lethal Xcess being played with Steem

It’s a fun game, but definitely very difficult. I wish I could try it on my ST color monitor because bar none the SM124 was the best color monitor released in the era. I don’t have a floppy drive in my pc any more, or I would make a disc and play in the 1040 STFM I have in the attic. The rom file contains a “trainer” mode that I recommend if you want to see the entire game and is available at the official site below.

A game like this would make a great Flash CS3/AS3 release and I will consider it for the next game I make after Pumpkin Man is complete. 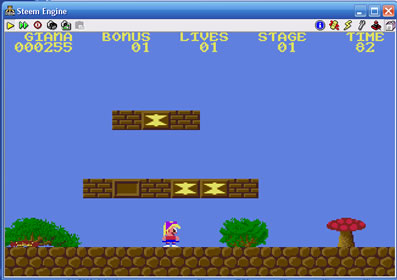 The great Giana Sisters started out as a release for the C64, and quickly caught Nintendo ire. The C64 game version was just a little too too close to Super Mario Bros. Rainbow Arts was forced to stop selling the game, but pirate copies were spread world-wide. It remained immensely popular in the 80’s as it was translated to most of the popular systems of the day. Since Nintendo refused to port their games to 80’s computers, this was the only way for a non NES owner to play a game anything like the suburb Super Mario Brothers (without going to the arcade that is).

The Atari ST version was created so early in the ST’s life that the programmers didn’t know how to do effective side scrolling. So,  a screen flipping technique was implemented. It obvious to any late 80’s / early 90’s owner of an ST that side scrolling could have been relatively easily implemented, as it was a staple of ST games created during this time. In any case, while playing the game, I hardly notice the difference.

Sisters Giana and Maria must traverse 32 stages to find the big diamond. The can collect smaller diamonds along the way (100 = an extra sister, does that sound familiar?). There are many special objects and bonuses to collect such as lightening, bombs, clocks, and many more. The game plays much like Super Mario Brothers with some holes leading to secret chambers, but most resulting in death. The game also includes 12+ different types of monsters, and is very much more than a simple Mario rip off.

After playing for a hour or so I can tell you that it was definitely a quality early ST release. At a time Mudpies was the pinnacle of ST arcade game releases, this certainly must have been a watershed moment in ST gaming. It has nice tunes, clean, colorful graphics, and well throughout (if not “borrowed” in some cases) level design. It suffers in places that many ST and Amiga games suffered – controls. The NES game pad’s second action button was used for jumping, and this game suffers by having the jump fired off by pressing UP on the control stick. This makes jumping left or right a little frustrating. The great thing about Steem emulation is that I can assign the “UP” joystick action to one of the other buttons on my PC game pad. This makes the game infinitely more playable (for me at least) and I recommend it for any other ST games you might want to try.

The music was composed on the ST Yamaha chip by Jochen Hippel, who also did the wonderful tune for Lethal Xcess. Since he was so prolific in the ST scene, I decided to check out another of his and Rainbow Arts games next.

1991 was a little too late for me and the Atari ST. I still loved the machine, and played Kick Off Player Manager all the time, but the games were starting to get stale. Also,  my college programming classes needed me to focus on ungodly subjects like Cobol and Database Administration. The ST just wasn’t the system to cut my teeth in these subjects, so I opted for a PC emulator for the ST, and later for a full blown PC. As ST gaming was concerned, that was that. Of course, any ST or Amiga owner from the time who moved to a PC came to realize that PC games still needed another few years to even come close to the glory days of the 16 Bit ST and Amiga. With the purchase of the PC, I had to stop going to import shops to look for the latest ST software (California is a long way from England), and I never got to play games such as Turrican II. I was in PC game hell. A time when arcade games on the PC were relegated to 4 color shareware titles (some pretty good though). Wolf3d had not hit yet, and magazines such and CGW didn’t even have a top 10 list for Arcade PC games. The subject was universally ignored.

I get to play those ST games now though, and boy did I miss something special!

Turrican II is an update on the original Turrican, a C64 mega blast of platform shooting kick-ass! The game consists of 6 huge free roaming worlds to explore as and even a couple levels where you fly an R-Type style ship blasting meanies and collecting power ups. You are Bren Mc Guire, a space marine who must fend off the evil MACHINE while wearing you experimental Turrican armour. 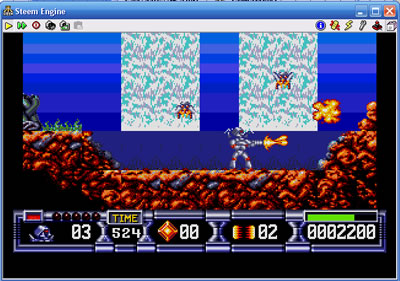 Turrican II being played with Steem

The game plays very loose, like many ST games, but is immensely fun! I reconfigured my PS2 USB to PC controller to have jump be button 2 and fire be button 1. This made the game became much easier and more fun to play than the original UP to jump that I dislike so much. If you are going to play via emulation, the Automation 449 disc works, I couldn’t get some of the other versions to start. While being very fun to play, the game is difficult. I haven’t found a working “trained” version yet, but I hope to. Your player has a health bar, so unlike other games of the era, at least you don’t die the first time you are hit.

I’m off to play this one some more, until next time, happy emulation…