After I completed my last game, Pumpkin Man, I decided I would not put it up for Exclusive License, but use Mochi Ads and non exclusive licensing to see how well it would do. Also, my sister Mari and I had created our own IP and story for the game and didn’t want to sell that away. It was my first completed AS3 game (other than small games) , and I was very proud of the work that went into the blitting engine, the state machine gameloop, the sound manager, the event model, the optimization, and all of the sounds and music I had created for the game. It seemed like putting it on game sites that allow Mochi Ads was the best idea. Well, I had a hell of a time getting game sites to even play it, let alone put it up one their sites. After a week, a select few did put it up and it did receive small but encouraging number of plays, many high scores posted, and some nice comments about the game. But with an eCPM hovering about $.05, the few 1000 plays it had earned so far didn’t offset the 4 months I spend developing it. I also put it up on Flash Game License as a non-exclusive only, but didn’t receive any offers at all (and very few looks). Now, it could be that the game just sucks, and that very well may be the case. Discouraged by the lack of revenue being generated, and after reading some wild -ass offers being touted for very simple click the dot style games, I decided I could not let my months of work go to waste and started working on a new game using the same engine.

Mari and I decided to take the Pumpkin Man engine, refine it a bit, change out all of the graphics, sounds, and create a new game that could stand on its own. I spend roughly 40 hours transforming the game into Mission Leprechaun, a sequel to Pumpkin Man. At the end of Pumpkin Man, you have rescued the princess and have defeated the evil Gourdon Guresome’s minions. In this sequel, you take on the role of Gourdon Gruesome. You must replenish his evil coffers by rescuing Leprechauns that have been imprisoned, thus getting their gold as a reward.

I have decided to only put it up on FGL not just as a non-exclusive, but as accepting all different types of license deals. Below are some screen shots of the game and the story I have put up on FGL. The link will take you straight to Flashgamelicense.com (which is currently the only place to play it other than my desktop). 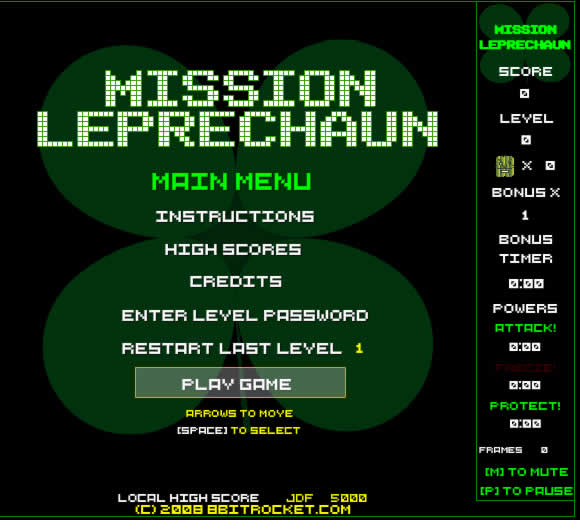 Gourdon Gruesome needs money. His untimely defeat at the hands of Pumpkin Man has left him broke and without minions to do his bidding. Help Gourdon finance his future evil deeds by rescuing Leprechauns who have been imprisoned in the potato field mazes. Gourdon must eat all of the clovers, and find all of the powers ups to complete each maze. Find keys to unlock the prison doors and use rainbow transporters to get inside enclosed areas. Watch out for rats and snakes, but be on the lookout for colored clovers, 4 leaf clovers, and mugs of ale. These will give you temporary powers to aide your quest.