This week we visit Kongregate, and find 5 new releases that we love to play.

I don’t just look at the ratings that users give, but there are so many games, I do take them into account. If a game looks retro or fun, but has a bad rating, I still give it a play. Also, I don’t read instructions (unless a game seems fun after the first play), and so many games are uploaded to the portals that I have to do a pre-screen based on descriptions and icons.

Chaotic – Perim Protector by 4KidsTV
This is a pretty good quality defense style game with good visuals and music (the music is an MP3 that does not loop properly though). I think all defense games are basically versions of the classic Rampart (if you don’t know it, you should) and this is no exception. 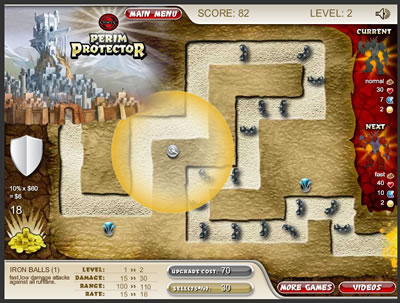 The player buys and places defense weapons along the path, hits start and watches the baddies march lemming style to their deaths.

Ace Asteroid by www.crusherk.com
I like Asteroids style games, and play favorites with them, so shoot me! This is a fun version with multiple play modes

Its is not necessarily the best Asteroids game ever made, but it is fun, has multiple waves of enemy combatants and some fun music.

Sinta:Escape from Ixerron Keep by www.ninjakiwi.com
This is a fun little puzzle oriented platform game with well implemented controls (WASD and Mouse to aim and fire). 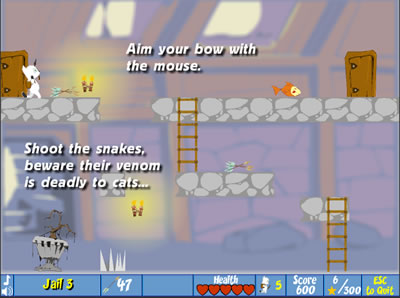 It isn’t beautiful, but it has fun, well animated graphics, and it reminds me of some of the best of the16 Bit era (ST/Amiga) computer games.

Bloxorz by Damian Clark
This excellent game is one of the best I have played in a long time. It is a puzzle game that is a lot like Chip’s Challenge. You move a rectangle block side to side and end over end across an isometric play field. The goal is to fit the end of the block into a square hole. There are many puzzles and challenge to get in the way. 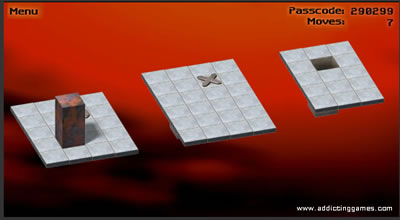 There and abundance of different tiles that make up the puzzles – such as the two difference pressure plates in the above image.
Don’t miss out on this fun game.

Castle Crashing :The Beard by www.bomtoons.com
This is a hilarious game based on the growing beard dilemma surrounding New Grounds founder Tom Fulp You, armed with a plunger, must defeat Tom, and some how this ill help his game get finished and on X-Box live arcade!?!? 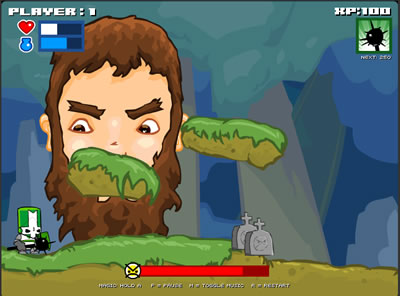 It’s funny to read the Kongregate comments as this wonderful, funny game was called GAY about 10 different times.