I received an issue of PC Gamer in the mail yesterday. It’s not strange for me to receive magazines on gaming subjects, but what is strange is that I never subscribed to that particular magazine, and have never received one in the mail before. After looking at the jiffy bag, with my name and address clearly printed on the label, and puzzling at the slick cover of the mag, I finally flipped it over to see a letter from the editor. It told me that I would not be receiving any more copies of Games For Windows, but instead PC Gamer would replace it until my subscription ends. It seems that GFW (once CGW) had been moved to an all on-line operation. I have been very busy over the last few months and I did not notice the lack of issues or heard anything about the magazine being shut down.

Even though I rarely play big budget PC titles these days (now that I use a Mac, and program my own games), I was once someone you might call a PC COMPUTER GAMER! That dreaded title now slathered on the geek gaming masses by an uneducated media was once a badge of honor to me. I didn’t read Computer Gaming World much until the 90’s, as Atari 800 and ST specific magazines were my choice when those were dominant platforms in the Fulton household. The early issues of CGW did cover a lot of Atari 800 games, and an issue in 1987 actually took a break from covering PC flight simulators long enough to heap begrudging praise on the Atari ST game Dungeon Master. But during the heart of the 80’s, it was few and far between when they covered my favorite games or platforms. In the 90’s, I finally joined the PC revolution and found CGW to be an honest, funny, well written piece of computer game literature that I was proud to subscribe to. PDF text only versions of all the classic CGW magazines up to 1992 are available here. After reading through the archive, I missed some great stuff back then. In particular are articles by Chris Crawford and Dan Bunten, and a host of other greats from the era.

At the pinnacle of the PC gaming boom, in 1999, the December issue was an GI-FUCKING-NORMOUS 500 pages! GGW was always brutally honest, and never mixed editorial and ad content even with the pressures of a 500 page issue filled with money making ads. They never seemed to be shilling for advertisers and their on-again off-again tongue-in-cheek fight with the entire country of Canada kept most readers in stitches. With the advent of relatively cheap consoles that could play decent hi-res games on standard platforms, the pc game industry started on a steady decline in the early 2000’s. With it, the number of pages of editorials in a text filled magazine such as CGW had to be cut down. But with the hilarious Jeff Green in charge, the magazine soldiered on its adult oriented (pages with more than 3 words on them ) gaming path. The staff was made up of a collection of game playing and writing super stars such as the particularly odd (but funny) Robert Coffey, and the dynamic duo of Bruce Geryk and Tom Chick. They are all still writing for the online version as Games for Windows for us all to enjoy today.

Computer Gaming World magazine was started in 1981 by Russell Sipe as a bi-monthly newsletter style magazine dedicated to the new medium of personal computer games. I remember seeing it on the news stands and in the shops in 1983 when we had our Atari 800. I remember purchasing a few issues, but the content, while very good, focused much more on other platforms, especially the Apple II, and IBM machines. The cover art was really outstanding, always designed to look like the art on a TSR Dungeons and Dragons manual (at least to me). 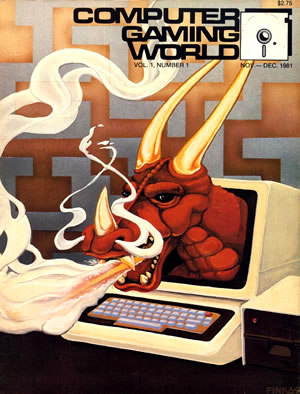 For 80’s gamers such as ourselves, the Dos based PC just didn’t hold much interest. Sure there were quite a few good games on the platform, but we were born and bred in the arcades, and those types of games just were not represented well on those machines. Of course we liked other types of games, but the Atari 800 and ST were great at doing arcade style games as well as the strategy, flight sim, RPG and adventure games so prevalent on the PC/XT DOS machines. When our Atari ST days were waning, I would page through an issue of CGW and find that genres such as ACTION games were particularly nonexistent in the PC world. The PC machines of the time could be programmed to play good action games, but it took rebellious shareware artisans to prove it. When ID released Wolfenstein 3D and later Doom, the PC platform finally surpassed the older 16 bit machines we were so fond of. That marked the advent of CGW covering those types of games as well as the other standard genres and also marked the start of my subscription with the magazine.

Johnny L. Wilson was the editor at the time and under his command we really enjoyed everything they had to say about games. The rise of my PC game playing coincided with the emergence of CGW as one of the premier computer game magazines (in the USA). Literally, a bad review from CGW would spell the demise of a game before it ever hit the shelves. The release of Wolfestein 3d in 1992 proved that action games could be viable on a PC. What followed were action oriented versions of genres that had been decidedly un-action oriented before: Strategy became real time strategy; Role Playing games became an action oriented affair, and 3d shooters became the dominant force in the games industry. From Doom, through Fallout, Command and Conquer, Duke Nukem and culminating with the original Half life, the golden age of PC action games was detailed in the pages of CGW. You can read all about the early days of CGW at the great JustAdventure.com site. Johnny L Wilson has two articles on his time at CGW. Part 1 and Part 2. Johnny also has a wonderful book a electronic games called High Score.

With the PC games decline continuing throughout the early 2000’s CGW finally had to change its name to Games For Windows Magazine in 2006. Microsoft became a major sponsor and even though I always ignored the 10-20 pages of ADVERTORIAL content they planted in the last 3rd of each issue, I read the rest cover to cover. It helped that they began to add content related to indie, free, and casual games, and the writing never ceased to be funny and informative. Even though I was no longer buying copious amounts of PC games, they kept me informed on the industry and I could read read it on the can in privacy rather than sit in front of my computer (which is not the best place to use the can OR read a long article on Half life 2). Games for Windows magazine is still available in digital form, and just as good as ever. I guess the magazine’s passing hits me so hard because it marks the end of end of an era. For nearly 30 years it covered computer games in its own unique, hard hitting way, and it will be missed.

Much more information Computer Gaming World can be found at cgw.vintagegaming.org.