8bitrocket Diatribe: Getting rid of the old stuff

With a new baby in the house, plus a 3 and 1/2 year old starting to figure out what it means to have a little brother taking up space that was once all his, I have been under the gun to purge into storage (or the bin) as many things as I can. Long ago a decided to get rid of every box and package for pc and console games (DS games being the lone exception). I bought those inexpensive black cd binders and placed all of my PC games and software into them. I like the ones with 4 spots per page for cds (on each side). If a game or software manual would fit in the slim confines of the cd envelope on a page, I placed it in the bottom row and the associated disk in the slot above it. Since I now use an iMac and Parallels to do most of my work, I have no use for most of the software I have collected. Unless I really want to use boot camp, most of my game library is useless. With 6 giant binders chock full of 10 years of PC software, I had a lot of cleaning up to do. Even though these binders takes up little space, I decided that at least 2 of the 6 could eliminated. I wanted to have room to spare in the binders I kept and I also promised two of them to my wife to use be for the pile of kids DVDs we have procured over the last 3 years. That meant I had to be pretty liberal in the things I got rid of and very conservative in what I kept.

I found a big green sturdy Lego Duplo box in the garage and decided that it would be a fitting storage compartment for the disks and manuals I was going to purge. By telling myself that the box of software would be just a few steps away in the garage and not in some off-site unit, I was able to purge with a clear head. I first went through the games and kept just the retro compilations and things that might work in Parallels like You Don’t Know Jack and Motocross Madness 2 (fingers crossed). I also kept Half life 2 and episode 1 just in case I decide to test out boot camp. I got rid of a museums worth of PC games that hopefully I won’t miss and can Goozex in a couple months. I also blasted an entire binder of Maximum PC Magazine CD cover disks, but kept my almost complete set of the original Retro Gamer cover disks ( I only have issues 3-19 of the original run, plus all of he new ones). I then purged all of the unnecessary system, driver and application software but kept all of my backup disks.

What remained were four 1/2 full binders instead of 6 full ones. In doing so, I kept one binder for system software (New Mac stuff, and PC essentials for use in Parallels). I kept one binder full of my music loop library and multimedia production software. I have one binder for the back ups, video cds of the cats, kids, and little movies and songs I have made over the years. I also kept one binder with GAMES (some will work in Parelles like Bookwork Adventures and some probably won’t). All of the binders now have much breathing room to grow.

Here is a birds-eye view of the container full of disks that is going ito storage. There are close to 300 disks and manuals in that box. Most of the manuals are in another box as they were too big to fit in side the CD binders. System Shock 2 is one of those. Wow that was a great game. 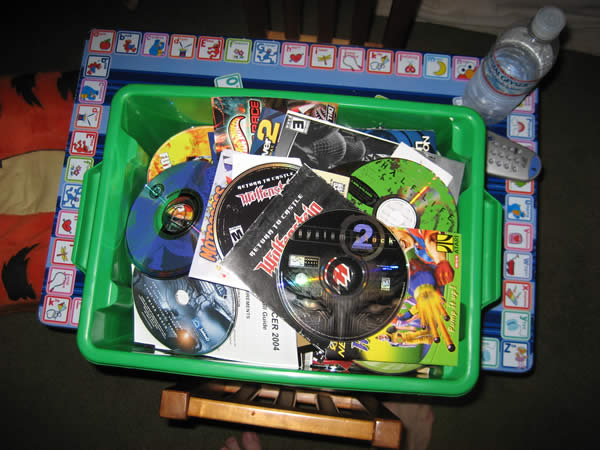 New tutorials
I have a few new tutorials planned for the site and hope to spend the next couple weeks getting them live. I was actually going to start on one tonight, but this disk purge thing became a necessity. My wife’s reasoning was that our cleaning people are coming tomorrow, so I need to help clean the house before they arrive!?!? I know it doesn’t make sense to me either, but you let things slide a little once you are married and have kids with someone. I get a lot of requests for tutorials and updates to the ones I have, so here is what I have planned for the next few weeks. Let me know of you have any requests:

I haven’t made any new progress on my new game, 8bitrocket Micro Retro Mash-up, but that needs to be in the picture also. I need to finish something soon for Mochi, GameJacket or FlashGameLicense.