RuneScape is a free Massively Multi-player RPG that I started to play off of the AddictingGames home page today. This British produced, Java based game plays very well on my New iMac. Considered to be the most popular MMORPG in the world, this title has been around a LONG time, but I just have now begun to try it out. I don’t have much time for non-stop gaming, so I am unsure how much I will be able to get into the game, but it has been interesting so far.

After creating my free account, and dressing my character as an Abel Xavier clone, I set off to learn the basic tutorial skills that are necessary to survive in the RuneScape world. These included chopping trees, lighting fires, collecting shrimp and cooking up a lovely meal. After about 15 minutes of doing that and watching others, I graduated to the next tutorial level, Making Bread! Anyway, I usually want my games to be filled with quick action, but this is more of a Sims in the old world rather than a hack and slash Phanstsie fest.  Once you progress in the game, there are battles and quests and all that cool zarjaz, but at the beginning, you have to learn the necessary skills to survive. 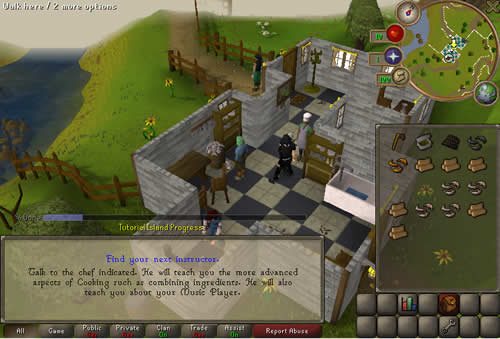 The graphics are very well done, but obviously, this Java-based engine is not going to look an like XBox 360 rendered 1080P game. It looks nice for what it is and the game is very deep and engrossing. Will I play it more? I don’t know, as I only have short time intervals for game playing. There seem to be over 150K players online at any one time, so if I continue to play or not, this game is going to be a massive success.

According to Wikipedia, the original game was was released in 1998 as an isometric MUD by Andrew Gower . It was later converted into 3-D with his brother Paul while at Cambridge University. Currently, the game is hosted on 150 servers world-wide, with capacity to host 300,000 players simultaneously (2000 per server). For $5.95 a month, players can upgrade to a premium membership that is being constantly upgraded with features not available to free users. The free game is pretty fun too, you will have a couple ads on the page while you play, but it is more than worth it.

Visit www.runescape.com if you are interested in trying it out.