Retro Blaster – A look back (and forward), plus a new high score.

Retro Blaster – A look back, plus a new high score.

The first independent Flash game I ever released on the harsh Flash gaming public was my Asteroids/Blasteroids loving tribute called Retro Blaster. It was finished after many false starts, and well before Mochi or GameJacket allowed us to derive revenue from our games directly. I knew nothing about sponsorships and licensing (FGL would be started 6 months later). So, I sent out a few feeler emails to aGame and AddictingGames, as well as a couple software houses, but no one wanted to touch it with a 10 foot pole. That was very very difficult for me as I thought the game was brilliant (we all feel that about our babies, don’t we). It was the Asteroids on Steroids game that I had always wanted to make (and play), but never could before. I spend an entire year of spare time on the game. Much of it was spent developing my own BitmapData engine for animating all of the sprites and particle explosions in AS2, well before I even knew others were attempting the same thing. It used 100’s of movieclips (empty) with a BitmapData object attached to each. The objects would loop though array of BitmapData to simulate animation. It provided me with the optimizations necessary to display 500+ objects on the screen and made for simply the best blaster I had ever made.

I added in all of the features that I always wanted in an Asteroids Game: Weapon upgrades through between level shop purchases, bosses, a full story and ending, cheat codes to let you play with the Galaga ship and Millennium Falcon, big-ass particle explosions all over the screen, and more. When I was finally done, I was proud of it, but I had spent nearly 1000 hours developing the game. Sadly, it has only made about $50 with Mochi/GameJacket ads (I used both). No one ever offered me a sponsorship, but I did get one small exclusive license once FGL was in full swing. I am not bitter though, as the game development taught me a great deal about Flash, action game development, and more. Also, the end goal was never money. I set out to make the best game I could. I think I did, but the sad thing is, not many people have played it. One of the drawbacks of my optimization technique was to pre-calculate and pre-render the animations and store them in arrays of BitmapData objects. This made the game start up time take far too long for most players. I now know that you only have a very short window to win over the young fickle audience, and they don’t care that the start up delay made a better game, they couldn’t be bothered to wait long enough for the game to even begin. And who could blame them? That pre-render sequence can take up to two minutes on some machines. I have not made that same mistake again. The Pumpkin Man engine loads up quickly and allows players to get into the game right away. I was able to create 4 separate games from that engine with plays from all 4 totaling over 2 Million and counting. Hardly a blockbuster in the Bloons mold, but then again, Pumpkin Man is only 1/2 the game Retro Blaster is (at least to me).

Fast Forward almost 2 years, and I decided to play Retro Blaster once more again today. I think it was because the new cartridge look Steve has created for the games is so appealing to me, that it made me want to play the game again. My goal was to play ONE game and see how far I could get. Since I know all of the secrets (what to buy when, and how to grind out enough shields to not die on the last boss) I figured it would be a snap, and it was. I didn’t use any cheat codes at all, never re-started, and 40 minutes later, the triumphant game win song I wrote was playing and my score was the best any one had sent to me. The game keeps your own top 10 local high scores, but I never integrated it with Mochi scores, so there is no way to know what the real top score is. I have relied on people sending me their high scores to validate the current number 1.

In any case, here is a picture of my score: 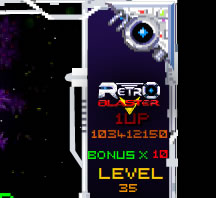 Here is a screen shot of the final game win screen (with firework explosions going off ala Pele’s Soccer on the 2600). 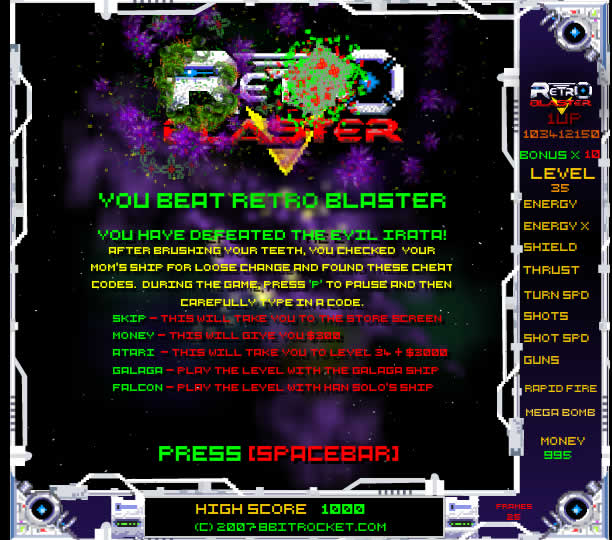 If the game looks fun to you, or you would like to add it to your portal (it currently only has about 350K total plays so not many people have seen it), please go to the game play page, or the portal distribution page. Try it ourt, and see if you can beat my high score.

I’d like to hear what some of you guys who have never played it think of it. Should I make a #2 that doesn’t take so long to cache at the beginning? Or Should I just shut up and move on, stop living in the past and make some new games? ( just did, by the way).