Spike.com, the web arm of Spike TV has launched an arcade filled with
games that they claim are just for men (women will get a kick out of
some of t these too I am sure).   The arcade currently
contains 5 titles that will probably look familiar to you if you have
spent any time on addictinggames com. While certainly
not “Fresh”,
these titles do offer some great entertainment.   We take a
look at three of them below:

Beat
Me Up is a rag doll physics game
where the player is tasked with trying to inflict the most damage
possible on a stick polygon man within the given time limit. The game
begins with your poor on-screen dude falling from the sky and impaling
himself on a tall sharp object attached to the bottom of the screen.
Once he has been suitably impaled, your job is to use the mouse and
fling him around the screen, aiming for a number of the sharp objects
in almost a pinball like fashion. The better you are at flinging him
into on screen ordinance, the more blood he will spew and the higher
your score will be.  You can used the [+] and [-] keys to
control falling debris which inflict even more damage. 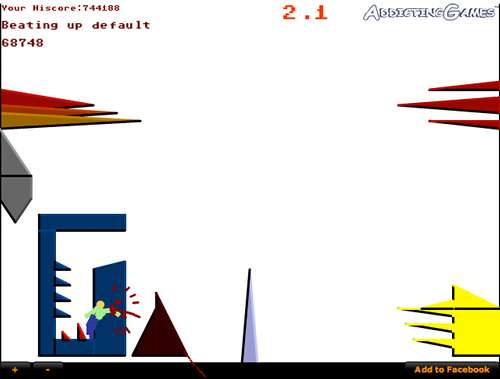 This title was originally created by Will
Perone, and I have seen it
around the net for a while now. It is nice to see it collected together
with other games targeted at dudes with time on their hands while at
work.

8bitrocket take: Beat Me Up certainly is not for the faint of heart or
young children, but there is an undeniably addictive quality
to
flinging the hapless on screen man around the screen. This is due to a
very nice use of physics to create an almost rag-doll pinball machine
effect. I liken all of these types of games (including the series
of clone games where you launch a helpless hero scrolling horizontally
down the screen and try to see how far he will go) to the wonderful
game  that
was the Javelin throw game in the classic Track and Field by Konami.
While Beat me Up is fun, it isn’t without a few problems that can
easily be rectified. The game is solid, but the UI and instructions are
almost non-existent. It took me a few plays just to figure out the
basics, and I still don’t know exactly what the [+] and [-] are used
for. I certainly had fun trying to figure it out  though.

Riff
Master II is  the Flash
equivalent of Guitar Hero.  Notes fly down the screen and
using the ASD and JKL keys you attempt to play the right notes that
corresponds to the associated key in time with the song.
There are Easy and Normal Editions for 1 or 2 players. In a two player
game, one player uses ASD and the other the JKL keys.  The
game is very polished and well programmed with nicely drawn and
animated characters. 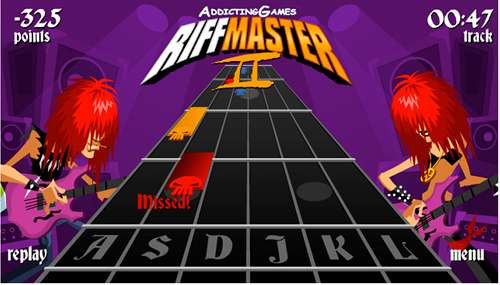 This game was originally launched on to addictinggames.com by Freaky
Tiki Productions.

8bitrocket take: Riff Master II is F**King hard! You can see above
that my score when taking the screen shot was -325. That
being said, it is a very well made game. I had a lot of trouble getting
the keys  to time properly,  even in the easy mode.
I am a huge fan of Guitar Hero, but find keyboard versions
lacking. That being said, Riff Master II is a great reproduction of
the Guitar Hero style of game play with a keyboard. I just wish I
wasn’t such a lame ass at it.

Negotiator
is almost like a text adventure of old, but with nice visuals to go
along with the well text. Actually it is  more like a
linear choose your own adventure book where you must negotiate with a
bad dude until he gives up the location of a bomb, releases hostages,
etc. After a mission briefing, the player is given a nice cut screen
intro into the current situation, and then is presented with a screen
containing the scene (including on or more characters that need to be
negotiated with). Using the arrow keys the player selects questions to
ask the perp. After the first question or statement is selected , the 2
minute timer starts. There is also a radar screen at the bottom of the
play area that is used to signify progress.  the goal is to ask the right questions/say the right things  before the situation gets out of control. 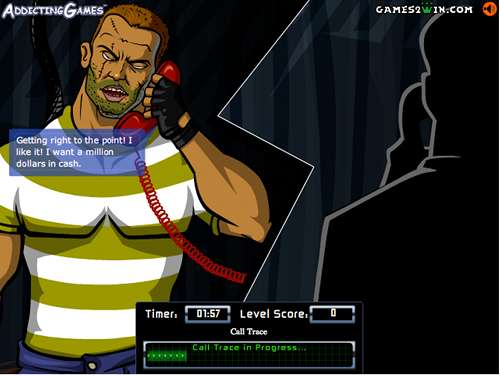 Negotiator was originally released by Games2win.com

8bitrocket take: Negotiator is a very cool, unique concept. The
illustrations and animations are done very well, and the “radar”
screen at the bottom of the play field seamlessly changes into what
every is needed for the current level. There doesn’t seem to be a lot
of replay value in the levels after they have been completed a first
time, but I’m not sure there was an intent to have people replay them,
as making them random would probably not have made them an better and
would probably have made them worse.