Earlier this year I wrote a very positive review of the movie King Of Kong: A Fistful Of Quarters because I was both fascinated with the content, and with how the film makers turned the story of a Donkey Kong high score rivalry into a universal story about “the outsider trying to break into the establishment.” In recent months many stories have surfaced about the authenticity of the events depicted in King Of Kong, but even so, the core “universal truth” depicted in the film still stands as a monumental achievement for the film makers.

Just last week, Showtime started airing another movie that was filmed at about the same time as King Of Kong, named Chasing Ghosts: Beyond The Arcade. This movie has been shown at film festivals over the past couple years, but has not seen any kind of significant release until now. The movie is less a documentary about any one person, and more a story about the Golden Age of arcade games (roughly 1978-1983) and their effect on people. In particular, people who, for whatever reason, could play them very well. The crux of the movie is a photo in LIFE magazine that featured many of the best players of the time who had all collected in Ottumwa, Iowa, Nov 7, 1982 at the Twin Galaxies Arcade for a video game competition. 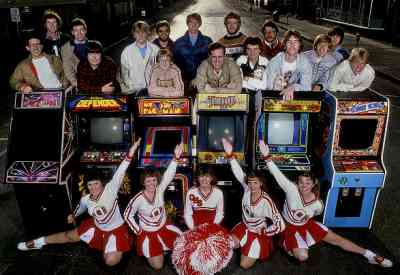 The film is a sort of “then and now” portrait of many of the depicted players. Many of the games and strategies are discussed in detail, and a very solid and compelling picture is drawn of what it was like to play and love the coin-operated video games of the early 80’s.

While the gaming content is very interesting (including some nice 3D visuals and mind-bending photography tricks), the stories of the players themselves take-up most of the roughly 90 minute film and to be honest, many of these are cringe-worthy. It’s obvious that many (but not all) of these “video game champions” were substituting devotion to these games for other missing parts of their lives. While a few actively deny that their obsession was caused by external forces, others are quite introspective and funny about it. The saddest stories here though come from the the individuals who simply cannot get beyond the the “glory days” of their favorite games and their own high scores. If there was supposed to be a mystery about the title of the movie (“Chasing Ghosts”), it disappears in the final frame. This is not really a film about games, but rather an in-depth look at obsession and the inability of people to leave the past behind.

If I have to find a fault with the movie it is that the narrative makes the film makers look less like parties interested in the subject, and more like bemused observers of nerd culture. From that stand-point, the movie is like shooting fish in a barrel . It’s fairly obvious right at the outset that a 42 year-old guy playing Berzerk for 28 hours straight is going to have be some kind of obsessive personality. However, the structure of the film lends itself to multiple short stories without a single compelling narrative. The movie seems to be saying “Hey look at these nerds! See these nerds! They are nerds! Get it? Obsessive Nerds!”, but with little else to add to the conversation. Again, the final frame (you will have to watch the movie to see it) of the film makes this apparent.

While the content of Chasing Ghosts: Beyond The Arcade is fairly solid, what is so interesting about the movie is how it looks under the shadow of King Of Kong. Even though it is not intended to be, Chasing Ghosts definitely watches like a companion piece to that earlier movie. Many of the featured characters in Chasing Ghosts are the same, save for King Of Kong “star” Steve Wiebe (whose absence makes it even more compelling as a set-up prequel…not that the producers intended it as such). It is also interesting to note that any internal impressions viewers may have created for themselves of the characters in King Of Kong will not be shattered by Chasing Ghosts. In fact, most of them will be wildly supported. While Steve Sanders comes off as less of an ass, and we get a more rounded portrait of disputed Missile Command champ Roy “Mr. Awesome” Shildt, everyone else (including Twin Galaxies founder Walter Day and Billy Mitchell) looks fairly familiar. This is a bit unfortunate for Chasing Ghosts, because to casual observer it appears to be covering the same ground as the earlier effort, but witha bit less to say about it. However, it is great for King Of Kong, as Chasing Ghosts simply adds more weight the proceedings depicted in the movie. Chasing Ghosts sets the scene, but King Of Kong tells the story. This creates the obvious double feature. For anyone who has not seen either film, the set-up of Chasing Ghosts could only be matched by the sucker-punch of King Of Kong. This is such a compelling pairing, that it is only too likely the double-DVD pack will be on sale as soon as the rights are worked-out.

However, even under the shadow of King Of Kong, Chasing Ghosts makes compelling viewing. Unlike the clear black/white, hero/villain subculture in King Of Kong, this movie takes a much more nuanced approach. The only heroes in the movie may be the video games themselves, still doing their job after all this time, even after being played, battered, exploited, and pummeled by these “champions” for the past 25 years. In the same way, the only real “villain” depicted is the passing of time itself: Sweeping away the years, and casually rendering the teenage exploits of the people involved, exploits that once seemed as important as anything of the day, to the dusty back-room of a museum that as of yet, still does not exist.