Note: New Star Soccer 4
is a great combination of sports simulation and role-playing game. I have some
time off from my day job, so instead of actually working on any of my own games,
I am feeding my addiction to Simon Read’s indie game masterpiece.

When we last checked in on 8bitjeff, he was mired in the lower divisions of
Spanish football, squeaking out playing some off the bench for Codiz CF. He soon
tired of playing on 5-10 minutes at the end of matches and asked for a transfer.
He took a pay cut and a prestige hit to go back to National Conference English
football (basically 4th or 5th  division). 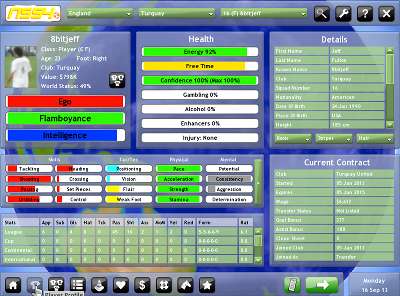 8bitjeff played 130 matches for Hoston of the Northern Conference where he
supplied them with 42 goals, 3 assists and 2 hat tricks over 4 seasons. He
worked hard, saw his skills improve, but didn’t see any offers from bigger clubs
who were willing to invest money in a young, brash American with no caps, no
girl friend and only a trailer filled with gym equipment to his name.

A break came when Yurk City, of the National Conference (division 3), needed a
striker on loan. 8bitjeff was all to happy to oblige as he had fallen out of
favor with the Hoston skipper and was riding the pine for almost an entire
season. His 10 game stint with Yurk did not amount to much more than single
goal, but he caught the eye of Second Division bottom feeders, Denegham and was
offered an immediate pay upgrade and contract to play higher division ball.

8bitjeff spent the summer working on his his physical skills and shooting. He
was disappointed to find that his the Yurk club had no plans to play him at
striker but decided to employ his impressive physical traits as a late game
stopper in defensive midfield and center back. During the depressing Fall in
rain drenched Denegham, 8bitjeff was able to manage to a single goal, and
convince his manager to put him on the blocks for a transfer. Turquay United was
in the hunt for a hit man and all of the extra training 8bitjeff had be able to put in
while awaiting playing time with Yurk was put to good use in the January to
April Turquay campaign. Turquay began January in 18th place, but with 8bitjeff
becoming a fierce force in the box (to the tune of 20 goals in 18 matches), they
were able to raise all the way to 8th place. Still not enough to advance to the
next division, but a marked improvement nonetheless. 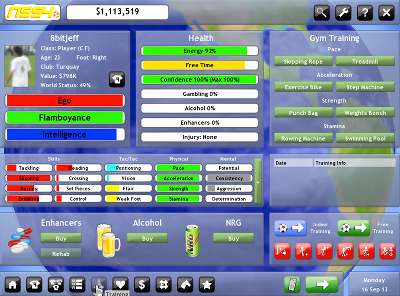 The summer came and 8bitjeff waited patiently for an offer from a Championship
or Premier league club, but none came. His scoring prowess did not go unnoticed
though, as he was offered $2 Million + Boot contract and and $1.5 Million
Clothing contract. With new found money and confidence through the roof,
8bitjeff found himself a pretty little English girl (to spend his money on) and
resigned to helping Turquay into a promotion spot rather than wait for a big
offer from a rich club.

It is now 6 matches into the 2013 campaign and 8bitjeff is doing well, but not
as well as he would like. He has 4 goals and 2 assists so far. Turquay is in the
6th position in the table (13 points), chasing Mk Duns in 1st with 16 points.
Even though he is scoring goals and making assists, his team mates are not fond
of 8bitjeff. He has been having trouble getting them to pass to him when he is
open, so in turn, he takes the ball up himself and fires a lot of wild shots at
the target. 8bitjeff will need to work on his team relations or he will have no
chance to helping the team to promotion but will have to wait for January
transfer offers instead. 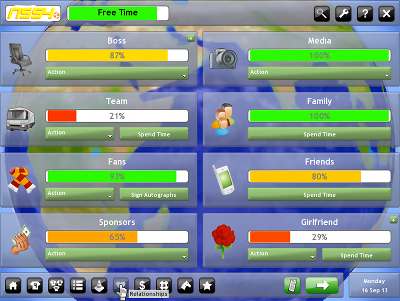 Money-wise, 8bitjeff has a lot of cash in the bank, but has not purchased
anything more permanent than a Beach house in hope that he will move to a new
club soon. He is keeping his fingers crossed that he will have a London address
soon. He will continue  working hard on his game, and on making personal
friendships with his team mates in an attempt to smooth put out tensions with
them. 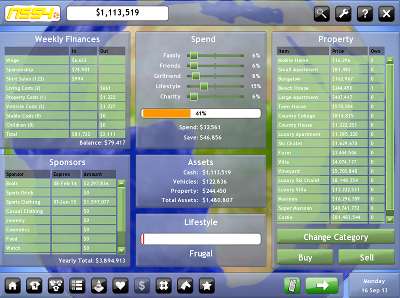 8bitjeff is still waiting for a call-up to play for the the USA Nats, but
will probably not get any looks until he can make it to a much bigger club.