Well, this weekend’s game challenge is complete and the brave and talented game developers have submitted entries. The challenge was to make a shoot-em-up style game (in the theme of apocalypse) and all five accomplish this with varying degrees of success. There are a few different threads in the message boards about the contest and even a slight on-going controversy about  whether or not the use of an existing engine was allowed. I have ignored all of that in rating these games. I have simply decided to give each game a score from 0-100% based on what I think I could have achieved given 48 hours of free time to make a game. My non-existent game would have received at 75% on this scale (let’s pretend), so any game above 75% is something that am in awe of, and below that means that a 38 year-old dude with 2 kids, a wife, 2 cars, a mortgage, and no free time thinks he could have done better than you =). We’ll call this the geezer compare score.

Apocalypse Jelly beans (play it here)  is a classic base shooter style game. It is nicely polished for a 48 hour game. The goal is to shoot all of the falling jelly beans and keep them from hitting your turret. The jelly beans fall directly toward your turret, so you must keep moving the gun sight with the arrow keys, aiming for the beans as fast as you can. The gun fires automatically, so you just have to keep the turret moving around the screen and stay alert.

The game looks pretty good, with nice colors and explosions. The sounds are also well done.

8bitrocket geezer compare score 75% – right on the dot. This is probably the quality of game that I would be able to squeeze out in a 48 hour contest. 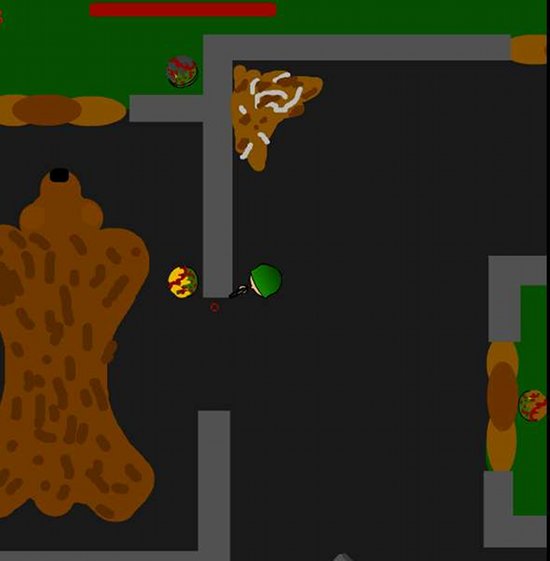 No name is provided for this entry, but I’ll call it Bear Skin Rug Blaster (play it here). While this one looks a little odd in static form, it is quite dynamic when played interactively. I’m not quite sure what the story is, but you play in a South Park style world as an soldier with a giant green helmet. Your goal is to shoot the zombies (I think). No matter the actual premise, and the lack of visual polish, this game rocks the game design foundations for a 48 hour game. You play in a small, but adequate scrolling world, using the WSAD keys to move the soldier and the mouse to aim and fire your gun. The goal is to kill as many zombies you can before you are eaten (your brain is eaten I presume). You can repair the brown barriers with the space bar to help keep the zombies penned in space. The music and sound effects are quite good, and the game is pretty fun. It is a very unique game and presentation.

8bitrocket geezer compare score 80% – I probably would not have been able to get this far in a single 48 hour period. Maybe close, but the AI probably would have given me fits.

ICBM (play it here) is a vertical scrolling Asteroids style game where the goal is to make it from the USSR to the USA. You are a missile and I guess when you make it to the USA, you are going to destroy a major city. I’m not quite sure I agree with the premise (neither would Toby Keith), but I do find the game to be pretty decent. It doesn’t have much polish, but what is presented is done well. You control the missile by rotating left, right and moving forward and backward all with the arrow keys. There is no inertia or thrust, so the movement is a little like the ship in Gorf except the player can rotate (Asteroids style). You have an unlimited supply of regular bullets and a small  number of smart bombs to get you through each level. Waiting at the end of each is a huge asteroid boss that must be shot many many times to destroy. The game play is very loose with no real physics applied, but that doesn’t make it a bad game.

8bitrocket geezer compare score 65% – I was afraid of this. I don’t have way way to prove it, but I think I could make a better game in a 48 hour period. (Maybe not). I have never pushed myself that hard. In any case, I don’t want Jonathanasdf to be upset with the score because he did quite a nice job given the time constraints.

Notepad Wars (play it here) is an outstanding achievement for 2 weeks of game development let alone 2 days!! I don’t really know if it fits the shoot-em-up mold, but no matter, it is a great great game.  You play as a pencil that must protect the thumb tack in the middle of the screen. Shapes will float toward the the thumb tack from the outskirts of the screen and you are tasked with drawing shapes to thwart them. Once you draw a shape, the game engine figures out the primary points in the object, draws its own version and sends it careening at the nearest enemy as a defensive missile.  It is great fun and quite impressive.

8bitrocket geezer compare score – 100% – I’m not quite sure what else could have been done to make a better game in only 48 hours. I certainly could not have made a game as good as  this one in 3 weeks let alone 2 days.. 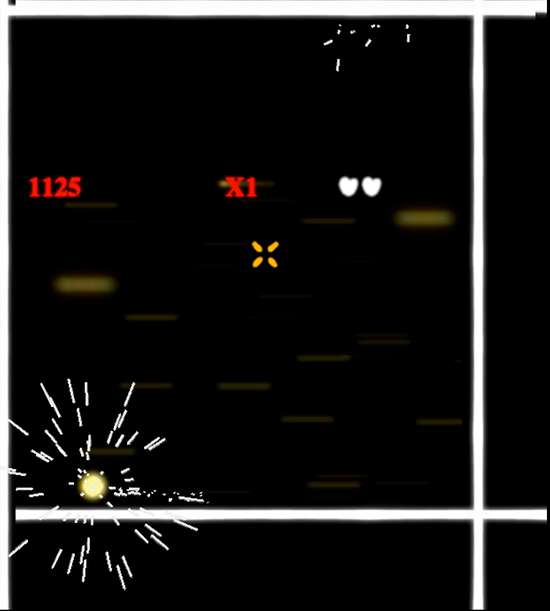 LHC Defender (play it here) is also quite an achievement especially given the limited contest time frame. Basically it is a non-scrolling Geometry Wars clone with particle effects and the best game play (for my tastes) of all five games. Everything about this game screams quality – from the title screen, through the instructions, all the way to the game end, visually, it wins hands down in my book. The only short coming is in the sound department, The game is virtually silent and while the other entries seem to have spend a good deal of time on sound, there maybe was an advantage here time-wise in leaving sound design completely out of the game.

8bitrocket geezer compare score – 95% – It would have taken me 48 hours just to make a title screen 1/2 as good as this one has. I would have had a bitchen soundtrack in my title screen though =)